No rescheduled date for the event has been set yet. 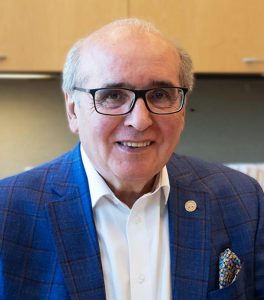 BIo
Silvio Baldassarra is an Architect with 45 years of experience in design and management of large complex projects in commercial, government, hospitality, sports and transportation sectors.  He was the project architect responsible for the retractable roof of SkyDome (Rogers Centre) in Toronto when he started with NORR in 1986 and today is Chairman of NORR Architects & Engineers Limited.

Thirty one years later, I will share our story of the design/build solution of the first and most successful retractable roof innovation in the world.

The retractable roof of SkyDome was the first of its kind in the world.  Four separate roof panels weighing 11,000 tons and 8 acres in area.  Three of the panels are required to move and stack on the one positioned in the north end to expose 100% of the playing field and 91% of the stadium seats.  The building technology is adapted from fail safe railway technology.  The adaption is innovative when moving 11,000 tons of roof.  The design/build team worked through solution after solution including many failures through testing in labs including University of Toronto under the direction of Professor Jeffrey Packer, before arriving at the final technology solution for SkyDome.

The presentation will start with the competition criteria which was simple “open and close the roof in 20 minutes”.  The concept proposed during the design competition was not fully engineered and was defined in concept only as 4 panels, three of which moved over the fourth.  The presentation will describe the 3 years that followed through the engineered design/build process of solutions for:

Silvio Baldassarra is an innovative design architect recognized by his unique architecture/engineering approach to large-scale complex projects during his 45-year career. His experience spans all sectors including aviation, commercial, education, institutional, justice, sports and transportation. Today, he is the Chairman of NORR and continues to lead, design and manage major projects and to build new project sectors. He is regularly sought after as an architectural guest speaker.

Silvio’s career has included the following major projects which he strategically won, led and managed including:

Professionally, Silvio was recognized by his peers in 2010, becoming a Fellow of the Royal Architectural Institute of Canada. In 2017, he was the Innovative Architecture Award recipient in the Premio Laziale dell`Anno 2017 by the Lazio Federation of Ontario. In 2019, Silvio was awarded the Ordine al Merito by the National Congress of Italian Canadians in recognition of outstanding achievement in architecture. Silvio is a registered Architect in Ontario and 5 other Canadian Provinces. Personally, he is a Knight of Columbus and holds a 4th degree in the Blessed Trinity Parish in Toronto.

* Luncheon reception sponsored by The Institution of Structural Engineers