The research performed by the group involves laboratory and in-situ experiments carried out with state of the art seismic acquisition equipment.  Data is analyzed and visualized with sophisticated processing software and numerical models are often generated for enhanced interpretation and understanding of the relevant physical processes.  Below are listed some of the resources of the research group.  Click on the links for more information. 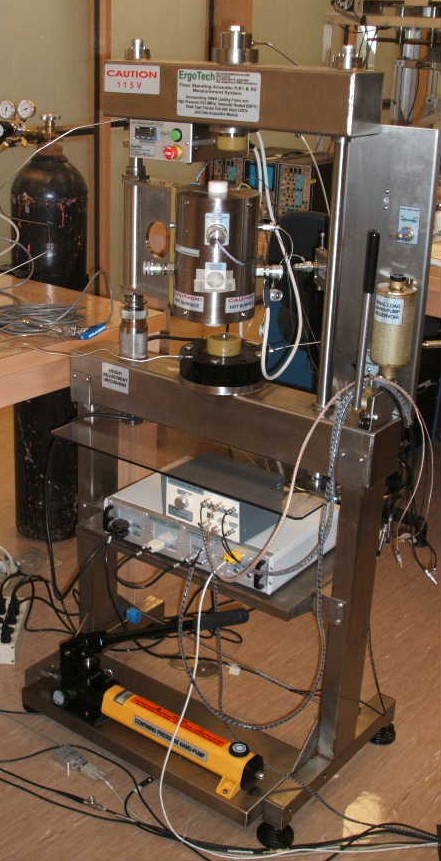 The Floor Standing Acoustic System (FSAS) was built by Ergotech Ltd, and has the following capabilities: 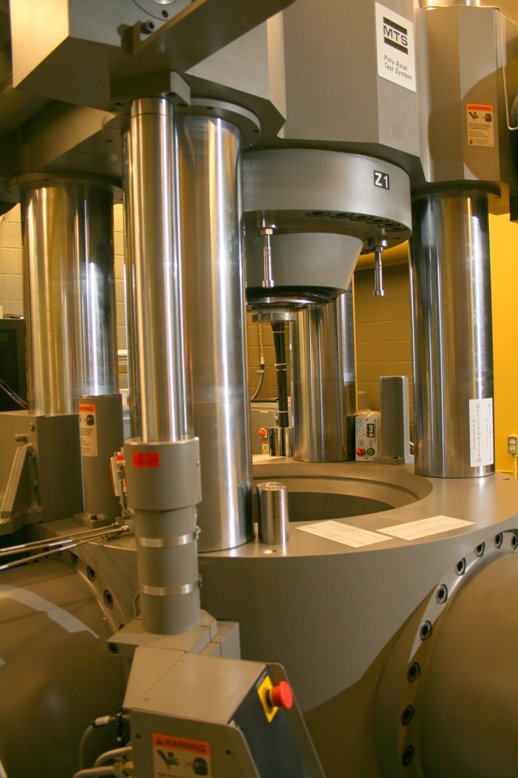 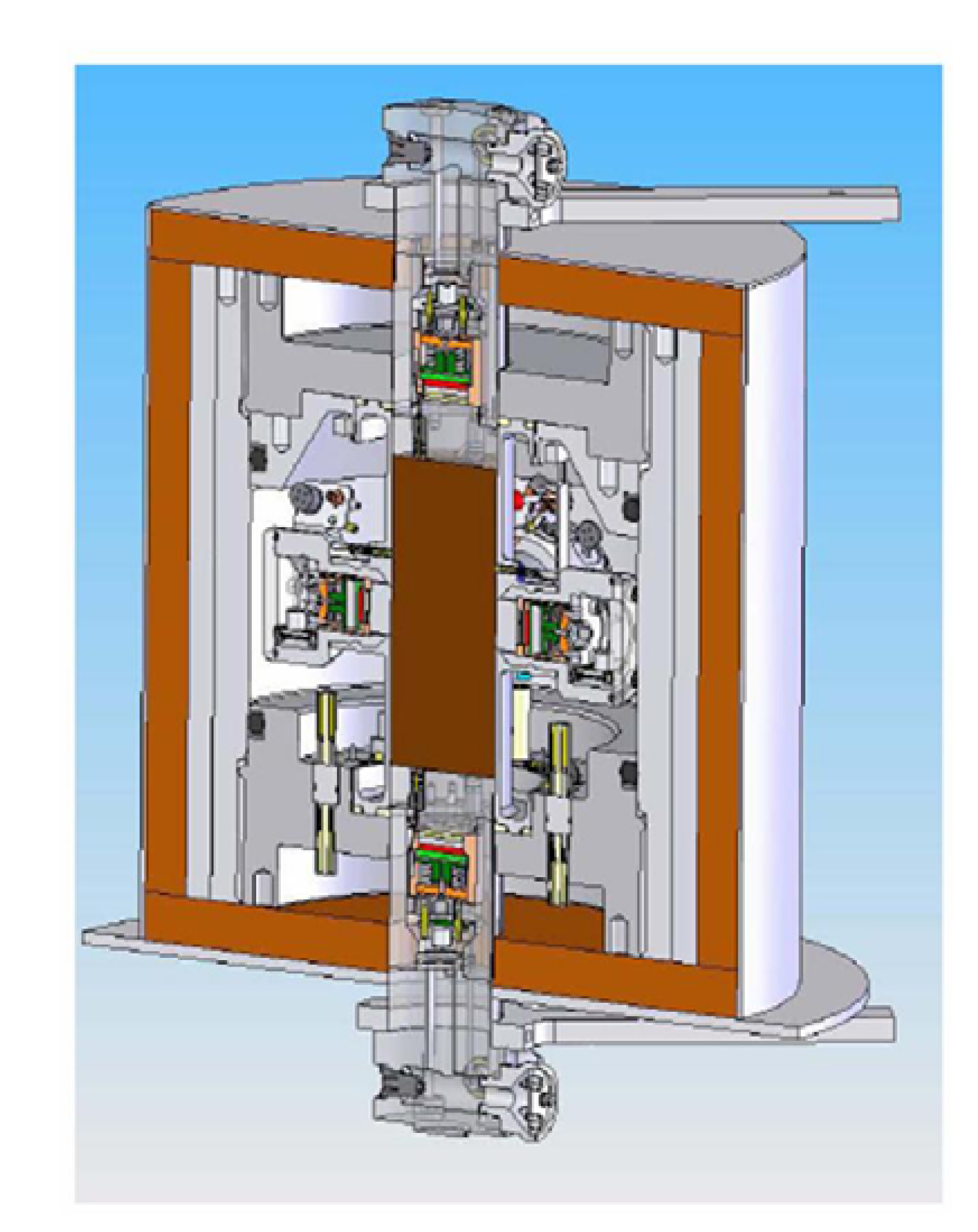 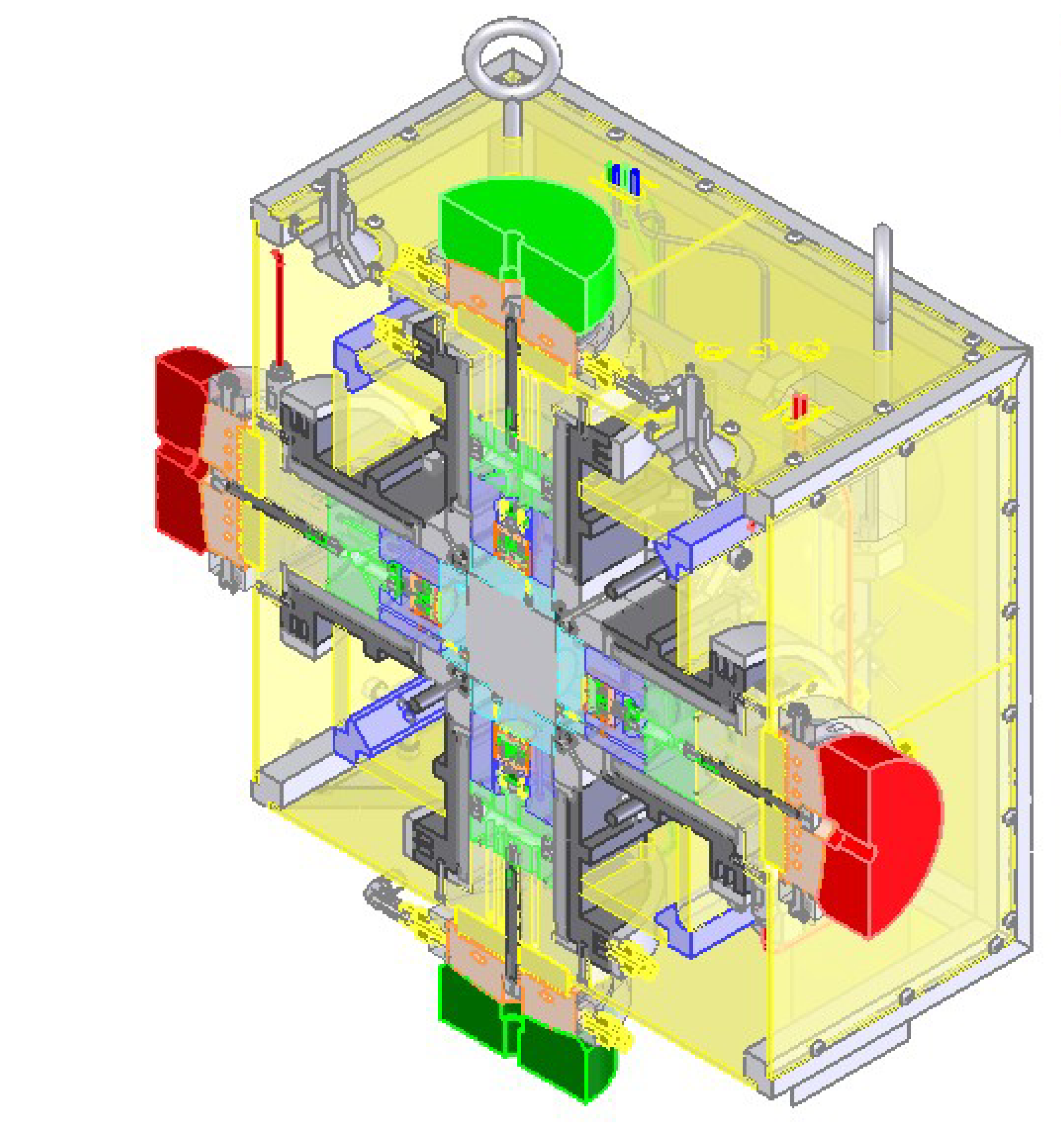 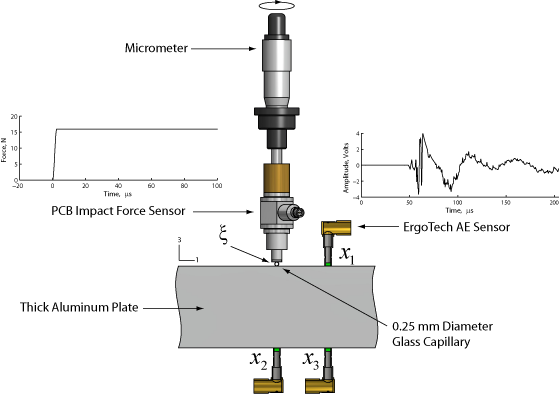 We employed the same calibration scheme as Manthei & McLaskey and Glaser to calibrate the EgoTech MkII transducer. A glass capillary fracture source was used on the surface of an Aluminum plate and waveforms were recorded at two location. Position 1 is on the same side of the plate as the source and position 2 is directly opposite the source (epicentral location). 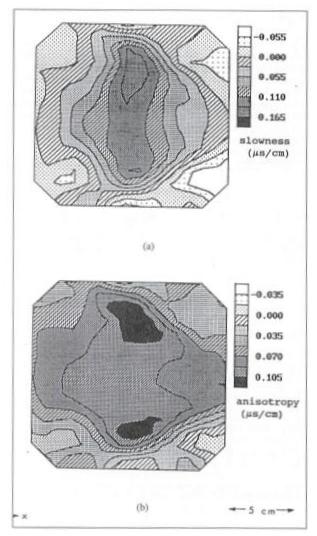 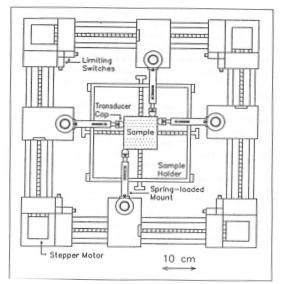 An overhead view of the tomographic scanning system.

Tomographic data can be acquired for large rock samples in the laboratory using an automated scanned transducer system. The system uses precision stepper motors to position four moveable arms to any required source/receiver positoon on the tomographic plane. Transducers at the ends of the arms are spring loaded against the sample faces for good coupling and are protected by hemispherical brass caps which facilitate sliding. The scanned transducer system allows significantly denser ray path coverage than is usually feasible with a fixed transducer array.

The transducers are 12.5-mm-diameter Panametrics V103 longitudinal wave transducers with a nominal centre frequency of 1.0 MHz.  A Panametrics 5055PR pulser is used to generate the signals at the transmitters.  Signals at the receivers are amplified by 60 dB with Cooknell CA-6 charge amplifiers and digitised with a Nicolet 4570B four-channel, 12-bit, 10 MHz digital oscilloscope. 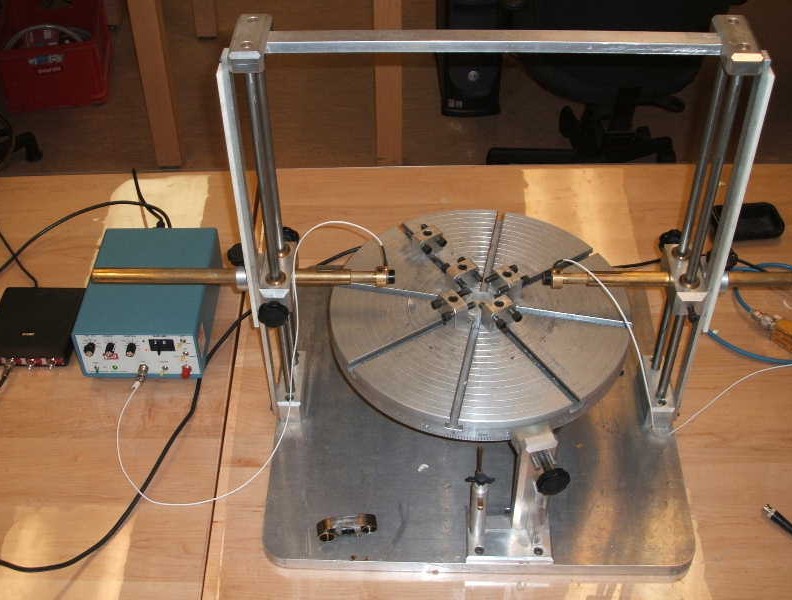 Equipment is available to accurately determine the azimuthal variation in the elastic properties of rock cores. 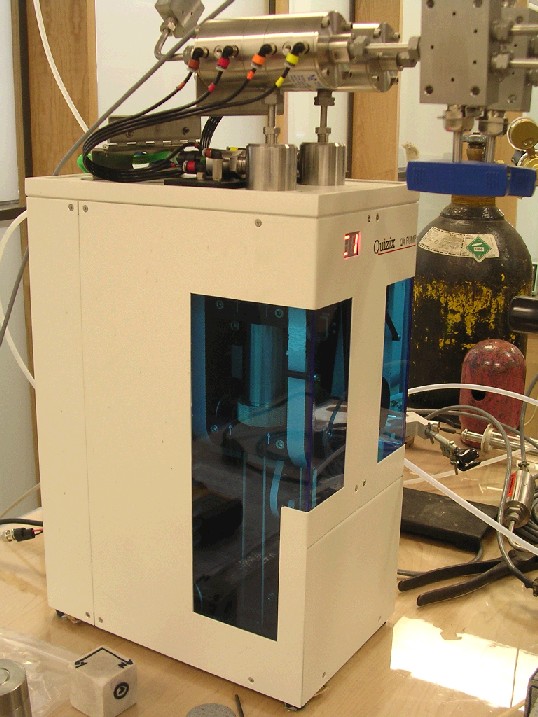 Both geophysical imaging cells are equipped with 18 ErgoTech Acoustic Emission (AE) sensors. Two designs exist for installation in either the rubber confining jacket (Right) or steel loading platens (Left). From calibration experiments conducted in this lab and others, the ErgoTech sensor has been found to be sensitive to surface normal velocity with an approximately flat response between 100 kHz and 1 MHz.

The lab is also equipped with multiple commercial AE and ultrasonic sensors: 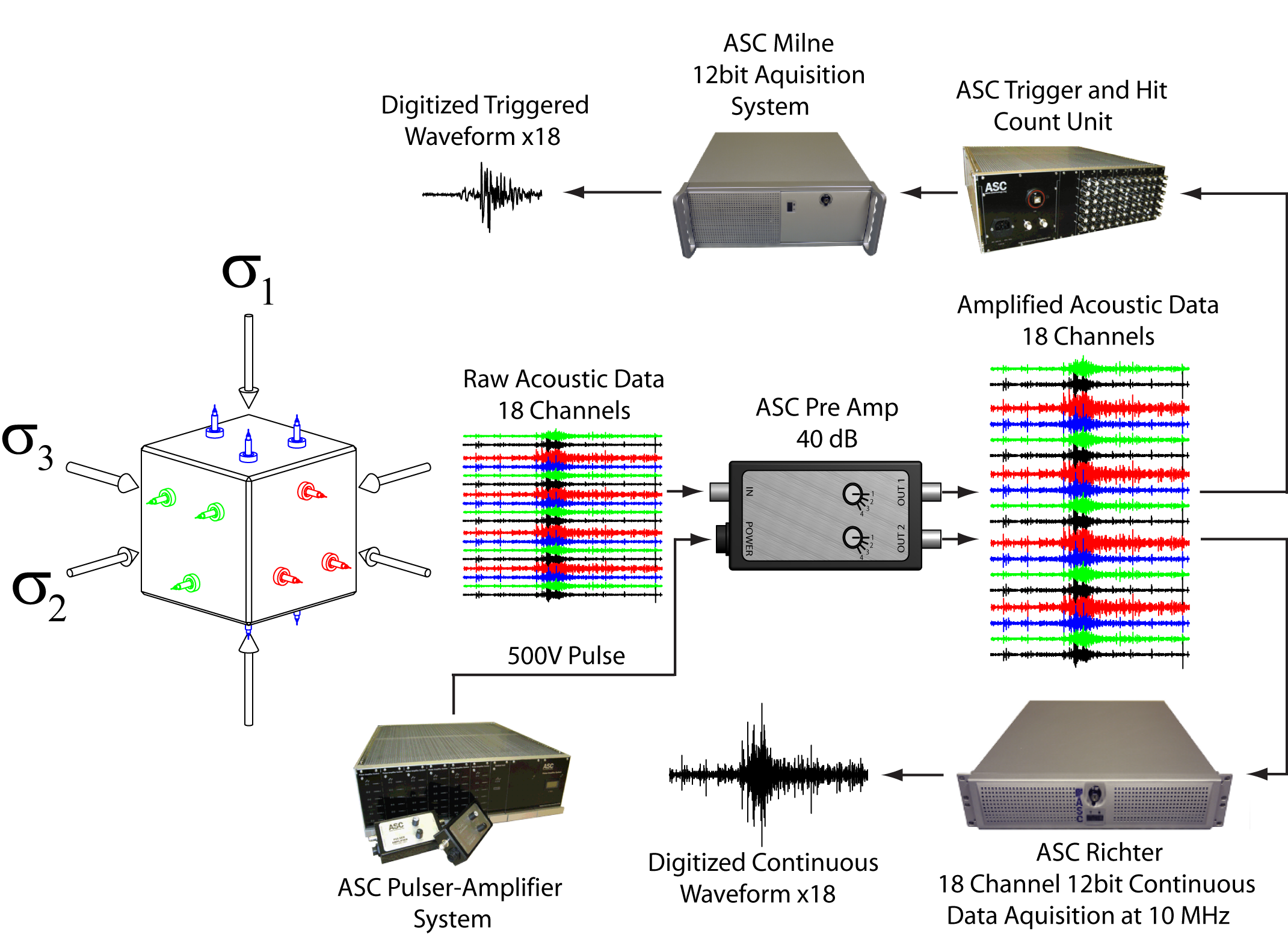 ASC Milne acquisition system is used to record triggered AE waveforms. 32 channels digitize amplified waveforms at 12-bits and sample at 10 MHz. The Milne system can record up to 20 events per second and is use to recorded waveforms from velocity surveys conducted using the ASC Pulser-Amplifier System.

ASC Richter acquisition system is used to record continuous AE waveforms for extended periods of time. The benefit to this system that data is not lost due to acquisition limits present in most trigger systems. Our lab has 10 Richter units each capable of streaming continuously on three channels at 10 MHz for roughly 4.5 hours. Data is digitized at 12-bits and can be harvested for discrete events.

ASC Cecchi provides 12-bit full-waveform data acquisition on a USB interface with sample rates up to 50 MHz and voltage ranges between 0.2 and 80 V. 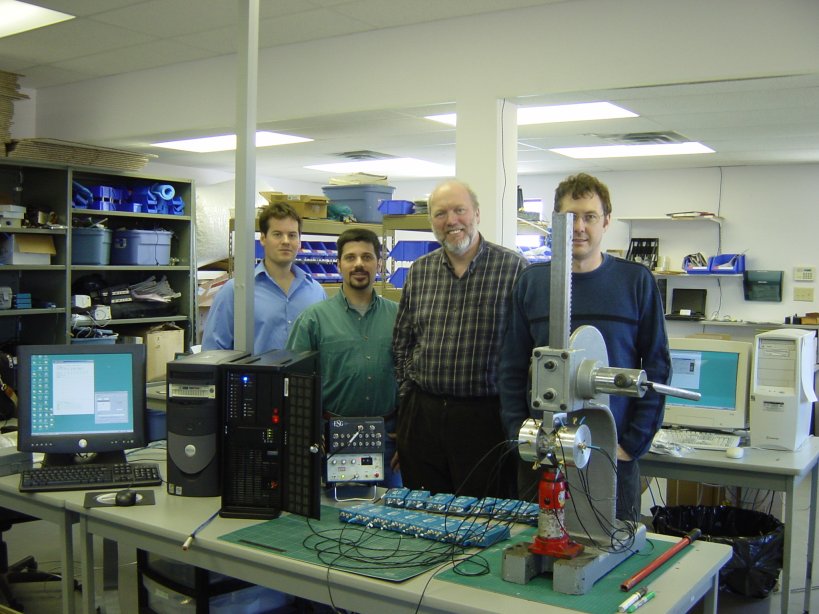 A state-of-the-art ultrasonic/Acoustic Emission (AE) recorder for ultra-detailed investigations of brittle rock fracture and failure. Click here for details of the research grant and scientific applications
Click here for poster on Giga-recorder applications

The Giga-recorder was built in conjunction with the Engineering Seismology Group.  It greatly improves on triggered AE monitoring equipment by using massive banks of RAM memory (38.4 GB) interfaced with enhanced ultrasonic recording technology, to continuously monitor critical periods of acoustic output during rock deformation experiments. The picture here shows the inventors and builders of the Giga-recorder at the initial testing in April 2002 at ESG, Kingston, Canada. Left to right: Wade Coulter (ESG), Spiros Bettas (ESG), Professor R.P. Young (Toronto) and Roger Bowes (Director, ESG). The Giga-recorder has the following specifications: 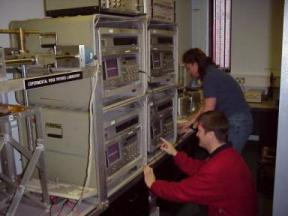 The research group owns and operates Nicolet high precision waveform acquisition and analysis system. The system is used for recording, manipulating, viewing and analysing very high frequency waveforms generated in laboratory tests and in in-situ experiments. The system consists of the following components: 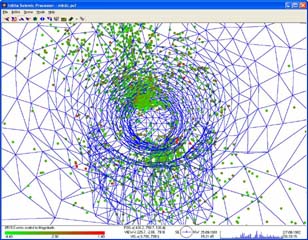 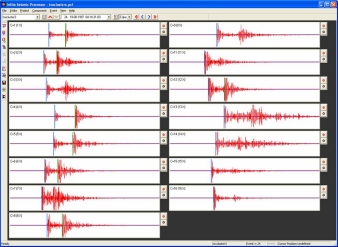 ASC Ltd (Applied Seismology Consultants) in England is a company founded by former students and staff of Professor Young. ASC have developed a flexible and feature-rich software package (InSite) for advanced processing and visualisation of seismic data (scale independent from km to mm), in the time and frequency domains. The software includes the following capabilities:

The Engineering Seismology Group in Kingston Canada is composed mostly of former pupils and staff of Professor Young’s Research group at Queen’s University.  As well as building seismic acquisition hardware, they have available a comprehensive suite of software for acquiring, analysing and displaying recorded seismicity.  The software includes a “real-time” source location system, meaning that events can be located as they are acquired.  Additionally, numerous source parameters (source radius, seismic moment, static stress drop, etc.) can also be calculated in real time.  To visualise the events, a seismic visualiser is included that allows the user to visualise event locations, magnitudes and source parameters on 3D mine plans.  The program can also create contour planes of event density or source parameters and the events or contours can be animated using the time lapse mode

In addition – a joint research project is currently underway with Itasca to create a 3D adaptive continuum/discontinuum modelling package (AC/DC) and to use this new software to simulate 3D in-situ environments. Most of the current research concentrates on examining the fundamentals of rock deformation, damage and fracture and the associated seismicity using the PFC packages – sometimes coupled with FLAC
PFC is a distinct element code where rock is modelled by thousands of individual particles bonded together at points of contact.  The particles are disks in 2D or spheres in 3D.  Using PFC allows a micromechanical representation of rock that can reproduce the macro behaviour of rock deformation.  Because the rock is composed of distinct elements, it is possible for the rock to crack and fracture allowing for detailed investigations of how rocks deform and fail under stress.  Also, the dynamic nature of the code allows for seismic waves to be emitted from each crack and seismic source information can then be calculated

With the move to Toronto, the research group has cemented already strong links with Rocscience Geomechanics Software and Research based in Toronto. These links have been in place for many years and members of Professor Young’s research group were involved in the development of some of the Rocscience code when Rocscience was part of the University of Toronto and Professor Young was at Queens’ University in Canada. Because of this, one of the features of Examine3D, Rocscience’s boundary element code, is the ability to include seismic event locations when calculating stresses around tunnels. The ASL owns and operates the following pieces of Rocscience software: 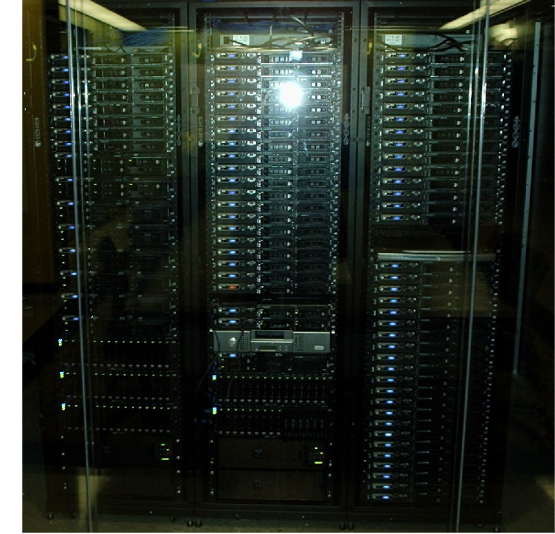 Specific details of the parallel computer cluster include: