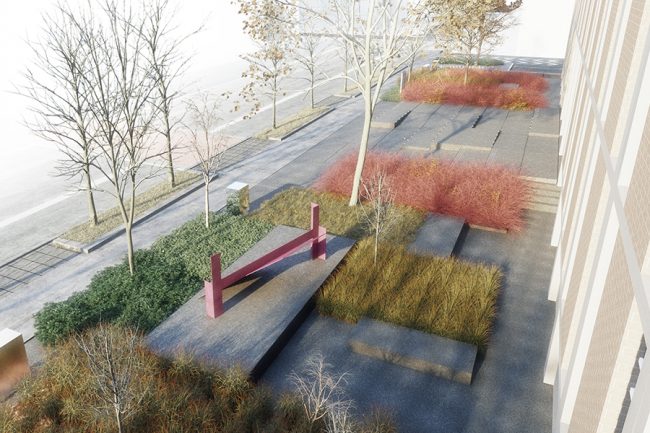 A view of the redesigned front of U of T Engineering’s Galbraith Building, looking north on St. George Street. (Courtesy: gh3*)

As U of T’s St. George Campus turns green again after a harsh winter, the space in front of the Galbraith Building’s western entrance will experience a renewal.

A new landscaping project, slated to break ground in early April, will see the St. George Street frontage of the U of T Engineering building redesigned with new seating, improved accessibility, and a prominent site for Becca’s H, the sculpture by artist Robert Murray to mark the Faculty’s 100th anniversary in 1973.

“We observed that this site at the heart of our campus wasn’t being used as much as it could be — with this redevelopment, we’re creating a welcoming public space that encourages our students, staff and faculty to gather, take a breath and share ideas,” says Tom Saint-Ivany, Director, Facilities & Infrastructure Planning for U of T Engineering.

“We also want to redesign this high-traffic corridor of the U of T Engineering precinct into a place that connects more fluidly with its surroundings: the new Myhal Centre to the north, and the Bahen Centre immediately across the street.”

The design is being led by gh3*, a Toronto-based practice, with the final design benefiting from the input received from students, staff, faculty, and the University’s Design Review Committee. Somerville Construction will act as the landscape contractor. Work will take place on one half of the site at a time, leaving the other half accessible and open to traffic. Those requiring an accessible entrance to the building can enter via the north side of the building, off of Galbraith Road.

The new design centres around ‘character-defined architecture,’ which describes coordination with the structural grid of the Galbraith Building and seamless visual continuity from the vertical to the horizontal planes.

The site will feature native plants including flowering shrubs, evergreens and perennial grasses, new granite seating and a heating system underneath the walkway to keep the area free of snow and ice year-round. Becca’s H will be integrated into the design on its own dedicated slab to the right of the entrance, creating another focal point for conversation.

The project is expected to be completed prior to the start of the fall term.

Story originally appeared on U of T Engineering News