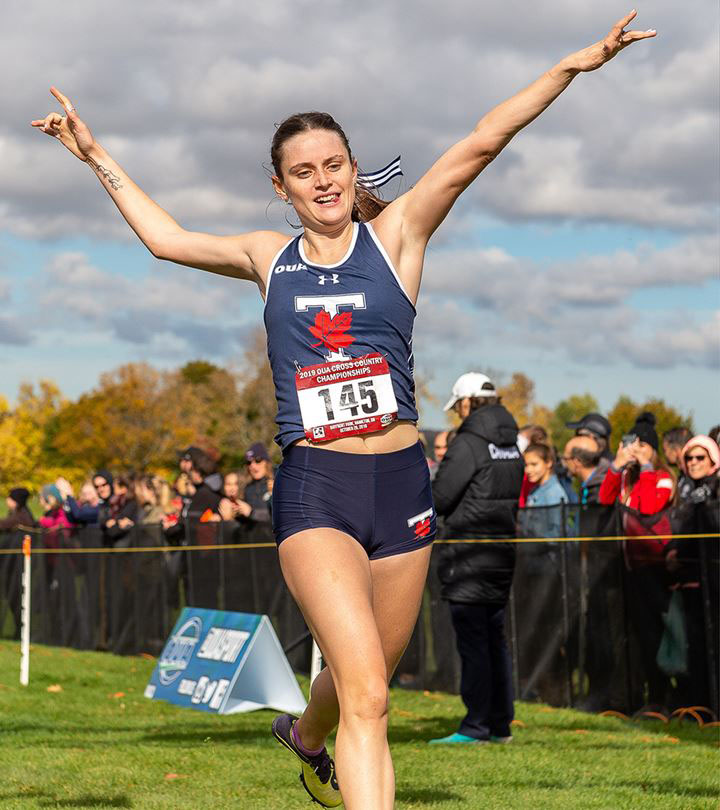 Lucia Stafford was named the 2020 T-Holders’ female athlete of the year on Wednesday, April 8.

Badminton standout Jonathan Lai and water polo goalie Rachael Jaffe earned the sixth annual Frank Pindar male and female athlete of the year awards, which is given annually to athletes competing in a sport whose official season concludes with either an OUA or other university recognized championship event.

T-Holders’ Athletes of the Year

Lucia Stafford was named both the OUA and U SPORTS cross country athlete of the year after winning gold at both championships this season. The OUA first-team all-star and U SPORTS first team all-Canadian dominated the season, winning the OUA title by six seconds and the U SPORTS crown by a whopping 14 seconds.

On the track, she helped the Blues to a bronze-medal finish at the conference meet, claiming silver in the 4×800 relay. At the national championships, Stafford won both the 1000m and 1500m, while earning silver and bronze in the 4×800 and 4×400 relays, respectively.

Earlier in the season, the U SPORTS first team all-Canadian broke two Canadian under-23 records in the mile and 1000m and also recorded two fifth-place finishes while representing Canada at the 2019 FISU Summer Universiade in Naples, Italy.

A second-year forward from Vaughan, Ont., David Thomson shone brightly during the 2019-20 season for the Blue and White. He became the first Varsity Blue to earn a U SPORTS all-Canadian nod since 1992-93, being named to the first team, and is the first men’s hockey player to earn T-Holders’ athlete of the year honours since Kevin Hamlin in 1985-86.

Thomson was named the OUA West most valuable player and an OUA West first team all-star after ranking second in the province with 17 goals and 23 assists for 40 points in 27 regular season games. He helped the Blues match their program-best 21 regular season wins and to a first-place standing this season.

The psychology and criminology major led U of T’s top-ranked powerplay, leading the province with seven goals on the man advantage this season. Thomson registered two or more points in 12 games as the Blues led the entire league with 125 goals scored.

Frank Pindar Athletes of the Year

She was invited to the national team training camp for the 2020 Olympic Games and helped Canada to a fourth-place finish at the 2019 FISU Summer Universiade in Naples Italy last July.

Jonathan Lai earns his third Frank Pindar athlete of the year award this season. Lai picked up his third career OUA all-star nod in helping the Varsity Blues badminton team to a dominant performance this season and fifth straight OUA title at the provincial championship on home court. Lai went a perfect 5-0 over three matches, dropping only one set in the process.

Katrina Innanen has enjoyed great success on the track, in the classroom and in the community during her five seasons with the Varsity Blues. On the track, Innanen is a two-time U SPORTS all-Canadian, two-time OUA first team all-star, was named the OUA female rookie of the year in 2016 and was a member of two U SPORTS championship track and field teams. She won the 2019-20 OUA female student-athlete community service award, is a four-time academic all-Canadian, an R. Tait McKenzie society scholar and was nominated for a Rhodes scholarship in 2019.

When she’s not at the track or in the classroom, the three-year team captain volunteers her time with numerous on-campus initiatives. She helped the track and field team organize events such as light the night walk, trick or eat, the spring community clean up as well as Movember and Think Pink campaigns. Innanen is the president of the SAMHI (Student-Athlete Mental Health Initiative) U of T chapter, which raises awareness for mental health and wellbeing in student-athlete populations.

In addition, she is the co-president of U of T’s Varsity Board, volunteered with the Blues Buddy UP program, is a four-year volunteer note taker at U of T and sat on the first-year athlete orientation panel for the past three seasons.

Osvald Nitski earned U SPORTS and U of T male rookie of the year honours in 2015-16 in helping the Blues to the national title. The five-time OUA all-star and three-time U SPORTS all-Canadian has also been a member of five OUA championship teams.

When he’s not in the pool or classroom, Nitski gives back to the community as a Blues Buddy Up ambassador, sits on the Blues engineering executive and is a volunteer tutor, serves as a mentor for the mechanical and industrial engineering departments and is a volunteer with the Student-Athlete Mental Health Initiative, U of T Chapter.
Rookies of the Year

Natasha Athanasakos had no trouble transitioning to U SPORTS-level hockey this season. The first-year forward notched six goals and nine assists to rank second among OUA rookies with 15 points during the regular season. The criminology major from Markham, Ont., got off to a hot start, notching three points in her first career game, while riding a six-game point streak from Oct. 18 – Nov. 9.

Athanasakos was a top contributor to Toronto’s first first-place regular season finish since 2004-05 as the Blues built an impressive 17-4-1-2 (W-L-OTW-OTL) record. She turned up the heat again in the playoffs, leading all OUA rookies and ranking fifth overall with five post-season points. After being named a member of the OUA all-rookie team, Athanasakos helped the Blues win their first OUA McCaw Cup since 2002-03 with a thrilling 3-1 victory over the York Lions.

The OUA first team all-star went onto garner U SPORTS second team all-Canadian honours after a silver-medal finish in the 400 freestyle relay on the national stage.

T-Holders’ Athletes of the Year
Presented annually to the male and female  student T-Holder – the U of T Athlete of the Year – for exhibiting the highest degree of excellence in athletics.
Male – David Thomson (Hockey)
Female – Lucia Stafford (Cross Country / Track & Field)

Frank Pindar Athletes of the Year
Presented annually to a male and female varsity athlete competing in a sport whose official season concludes with either an OUA or other university recognized championship event, who exhibits the highest degree of excellence while representing the University of Toronto at competitions during the team’s intercollegiate schedule for the current academic year.
Male – Jonathan Lai (Badminton)
Female – Rachael Jaffe (Water Polo)

George M. Biggs Trophy
Awarded to the graduating undergraduate male student-athlete who has contributed most to university athletics from the standpoint of leadership, sportsmanship and performance.
Osvald Nitski (Swimming)

Dr. Clara Benson Honour Award
Awarded to the graduating undergraduate female student-athlete who has contributed most to university athletics from the standpoint of leadership, sportsmanship and performance.
Katrina Innanen (Track & Field)