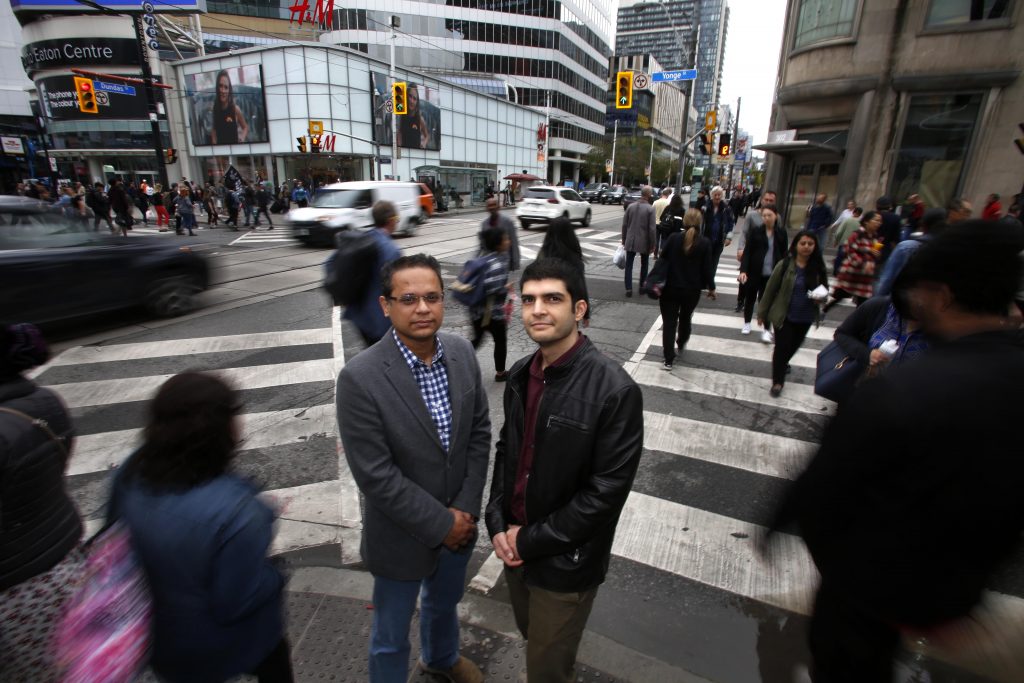 Sina Azizi Soldouz, a MASc candidate (R) and supervisor Professor Khandker Nurul Habib pose for a photo at Yonge Street and Dundas Street in downtown Toronto. A survey of pedestrians with sight loss was conducted in collaboration with the Canadian National Institute for the Blind (CNIB) under the title Understanding the impact of connected and automated vehicles for pedestrians with sight loss – a policy framework.
PHOTO: Phill Snel, Department of Civil & Mineral Engineering/ U of T

Pedestrians take their chances crossing the street as it is; making eye contact with a driver before crossing at an intersection has become standard to ensure one’s safety. But what if the pedestrian is visually impaired? What if the vehicle has no driver?

These are some of the burning questions facing our society as the rush to deploy fully-autonomous vehicles onto the streets becomes reality. With the need to develop policies, and laws, around this increasingly complex subject comes the need for more research and understanding. This is precisely where research meets the road.
Sina Azizi Soldouz, a MASc candidate under the supervision of Professor Khandker Nurul Habib, is focusing on the impacts of connected autonomous vehicles (CAV) on pedestrians with sight loss. A survey of pedestrians with sight loss was conducted in collaboration with the Canadian National Institute for the Blind (CNIB) under the title Understanding the impact of connected and automated vehicles for pedestrians with sight loss – a policy framework.

“When Professor Habib told me I was very keen. I didn’t know anyone visually impaired,” said Soldouz. “It took six months of research with good collaboration.” Survey design was accomplished with Dr. Mahadeo Sukhai, Head of Research and Chief Accessibility Officer at CNIB.

Participants were asked about current approaches and issues with using the existing transportation network. Using the present situation as a basis, several hypothetical scenarios were created for the study involving various levels of CAV interaction. The overall vision was to provide recommendations regarding the introduction of CAV technologies.
Overall, there is some degree of mistrust of fully-automated technology. The level of trust does, however, increase over time and direct experience. It is important to note the majority of those with sight loss are not completely without some vision.
Prof. Habib stated, “Along with all technological advances, we need to make sure the transportation system is inclusive and has no blind spot. This research on pedestrian with sight loss in an era of AV showcases our commitment to ensure the elimination of transportation-induced social exclusion in the future.”

Concerns for visually impaired
If a great number of autonomous vehicles becomes a reality, then a concern for those with visual impairment is a potential loss of real, or perceived, safety. The lack of a real person to communicate with, as well as not knowing if a vehicle is nearby, can be disconcerting. A fear of exercising mobility could lead to isolation, and loss of social and economic vitality.

How automated?
The level of automation for a vehicle can be scored on a scale of one to five. A level one vehicle is fully controlled by a person, and has no automation involved, while a level five would be considered fully controlled by the technology alone with no human interaction whatsoever. Currently, with existing market features widely available, we are at a level three or four; the vehicle is able to detect the environment and make decisions for itself, but some human override is required or available.
In the artificial intelligence (AI) community the term “algorithmic responsibility” is bantered about in discussions regarding giving the programming values or morals. After all, it might have to one day make a life-or-death, or even death-or-death, decision in a fraction of a second. There are many ethical dilemmas involved in this area, and will surely be very important moving forward, but the study did not address this.
It is important to note the AI implications, as more than vehicles become connected to each other in a network.

The promise of 5G
As the technology for 5G connectivity advances and makes CAVs a reality, so too does the promise of increased usefulness for connected wearable devices to assist the visually impaired. Devices with 5G connectivity, and short-range detection systems, could allow CAVs and people to “see” each other virtually and to make allowances, or guidance, for the other(s).
Weather in Canada remains a concern, as winter can create chaotic driving conditions with many variables. Soldouz is confident of progress and says, “There’s still a long way to go in Canada, but technology has improved prominently and we cannot stop it.”
Currently, such products as Blind Square, Victor Trek, Key2Access and Microsoft Soundscapes (coming soon) are designed to help the visually impaired read books, maps and more. As an example, Key2Access can use wireless technology to allow a pedestrian user to request crossing at an intersection without having to find and touch the physical button.

Key recommendations
If everyone involved in creating CAVs, and connected wearable technology, has the same guidelines provided by municipal, provincial and federal governments, then a uniform and cohesive network can be achieved. As well, the experience for those travelling by foot, automobile or bicycle can be expected to be similar in various environments across the country.
With a consistent system of access to local data for connected devices, it would be possible for vulnerable road users to access information like temporary sidewalk closures or construction.
Before mass deployment of wearable devices becomes common, more exhaustive testing of infrastructure and vehicles must be inclusive of persons with diverse abilities. On the plus side, the wearable technology becomes more popular and accepted, the cost-per-unit should decrease and make it more affordable for all.
“I look forward to seeing how technology will progress,” said Soldouz.

Sina Azizi Soldouz is a MASc candidate under the supervision of Professor Khandker Nurul Habib. His research focuses on analyzing the impacts of CAV on pedestrian with sight loss. He holds an MSc in Highway Design Engineering from Imam Khomeini Intl University, Iran and a BS from Azad University, Tehran, Iran. He is interested in transportation planning, and in particular travel demand modeling and data analysis.