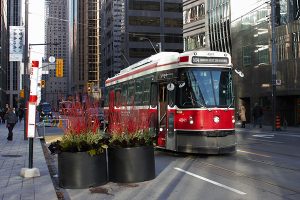 A streetcar stops on King Street in Toronto. A section of the busy east-west street travelling through downtown Toronto has restricted car traffic, and U of T Engineering researchers are collaborating with the City of Toronto and the Toronto Transit Commission to study the pilot project’s effects. (Credit: Billy Cabic via Flickr under creative commons license)

Toronto’s King Street transit pilot project aims to improve transit reliability, speed and capacity, along with a number of other measures included in a comprehensive evaluation and monitoring program. For a team of researchers, it also presents an ideal opportunity to study the effects — both direct and indirect — of traffic changes on air and noise pollution, public health and commuter decision-making.

The pilot project, launched in November 2017 and running for one year, involves altering traffic patterns on the stretch of King Street from Bathurst in the west to Jarvis Street in the east to prioritize through-traffic from streetcars, cyclists and pedestrians. Cars must take their first available right turn off the street, with through movements prohibited at eight of the 12 signalized intersections. The 504 King streetcar route is the busiest surface transit route in the city.

“There isn’t another city that’s done exactly what we’ve done, though other cities have taken measures to prioritize transit or restrict private vehicle traffic,” says David Kuperman, manager of surface transit projects for the City of Toronto. “It’s early days, but we are hearing some interest from other cities in what we’re doing because we have such a comprehensive data monitoring and evaluation program planned.”

The multidisciplinary team led by researchers in U of T Engineering is collaborating with both the City of Toronto and the Toronto Transit Commission (TTC) to gather data and share their findings and analysis. The team began taking measurements along King Street and surrounding area as early as summer 2017 to set a baseline before the launch of the pilot.

“It’s a very interesting natural experiment,” says Professor Marianne Hatzopoulou(CivE). “There are very few opportunities to conduct transportation and environmental research in a live natural laboratory like this.”

Hatzopoulou’s research investigates relationships between air quality and transportation patterns. For this project, she is using a technique called “scripted exposure studies” to measure and compare the air pollution exposure of people travelling along King Street and nearby areas, both before and after implementation of the pilot project.

“The idea is to replicate what an individual passing along or close to King Street would be exposed to, including all sorts of modes: cycling, walking, riding the streetcar, sitting in a coffee shop,” she says. “We designed four different routes involving both indoors and outdoors, along King and parallel streets, as well as cross streets.”

Her team will be carrying portable exposure monitors that measure traffic-related air pollution such as small inhalable particles and soot. They’ll also be carrying GPS units and will merge location data with exposure measurements, resulting in a detailed pollution exposure map for King Street and surrounding areas.

Dr. Cheol-Heon Jeong and Peter Murphy (both ChemE) of the Southern Ontario Centre for Atmospheric Aerosol Research (SOCAAR) at U of T Engineering have also installed several of its stationary AirSENCETM monitors throughout the pilot project area, as well as air quality monitors on two TTC streetcars dedicated exclusively to King Street routes for the duration of the project. These devices measure ozone, carbon monoxide, carbon dioxide, ultrafine particles, black carbon and PM 2.5, a standard for quantifying airborne particulate matter.

The group also includes Tor Oiamo, a professor in Geography & Environmental Studies at Ryerson University who is studying changes to noise levels, and Jeffrey Brook, a senior research scientist with Environment and Climate Change Canada and assistant professor in U of T’s Dalla Lana School of Public Health.

“This project is very exciting from a public health perspective, because we have the opportunity to collect a wealth of data on how an alteration to urban design affects health and behaviour,” says Brook. “The knock-on effects due to changes in people’s behavior could be significant, affecting not only transport and the physical environment, but people’s levels of exercise, stress, wellness and happiness, all of which have potential health benefits.”

In December the researchers met with representatives from the City of Toronto’s Transportation Services and Public Health teams to discuss coordinated data collection, information sharing, survey design and next steps.

“When a city makes a change like this, the primary goal is to improve travel times,” says Hatzopoulou. “But there are so many co-benefits that can come with that, and if we’re able to highlight those improvements to air quality and noise reduction, we’re telling decision-makers that there’s more value to unlock with these projects beyond just traffic circulation, and that’s very important.”

This story was originally published on U of T Engineering News.