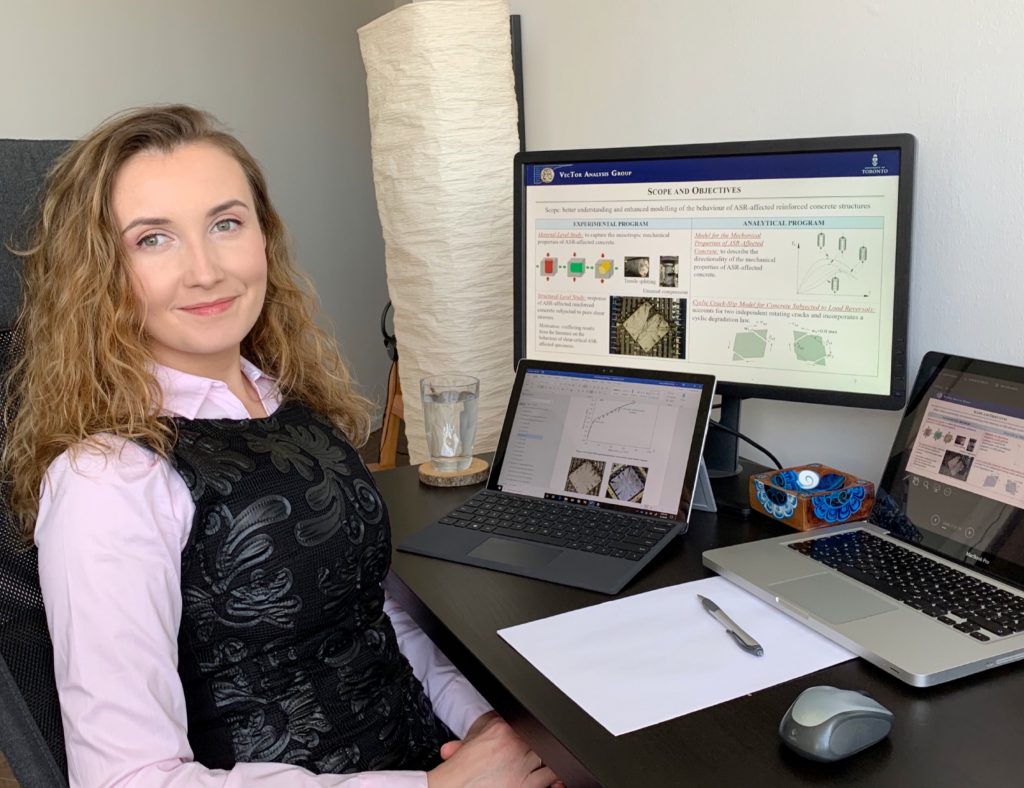 With necessity being the root of invention during this time of a public health crisis, going fully digital for a doctoral Final Oral Exam (FOE) has a provided a first for the Department of Civil & Mineral Engineering. Anca Ferche (CivE PhD 2T0) completed a two-and-a-half-hour presentation of her thesis and a vigorous round of questions from a committee on March 26 without an in-person meeting. It represents the first time a PhD has been awarded in the Department with an all-video meeting of this kind.

Ferche presented her thesis, titled “Behaviour and Modelling of ASR-Affected Shear-Critical Reinforced Concrete Structures” (Supervisor Professor Frank Vecchio), to a committee of six others with the most distant participant joining in from Texas.

This is not how I envisioned my Final Oral Examination to be. And yet, for me, it was a very happy experience,” declared Ferche during a phone interview. Using a home office setup of a laptop connected to an external monitor, Ferche gave her presentation to the group, then had a tablet to refer to her thesis during the question portion. Some preparation was in order as well. “I practiced more than I have otherwise, as I was aware I’d be seen only on a small part of the screen and I needed to be very clearly heard.”

“The slides and animation worked well. Regarding the question session, I think it went as well as in-person, and I was less nervous than I might have been,” says Ferche. Additionally, prepared for a lengthy and spirited discussion, she kept a large glass of water nearby her digital displays. It was drained by the end.

The University’s School of Graduate Studies (SGS) has had to be flexible during this time. “Normally a maximum of two voting members can participate remotely, while the student must attend in person,” Lisa Fannin, Completion Officer – Doctoral for SGS, explained. “As the FOE is considered a capstone event in the student’s doctoral journey, and is to be treated with a degree of ceremony and respect to honour the student’s years of hard work, it’s normally very strict. Switching to all-remote was therefore a huge change, but what was the alternative? Candidates were offered the option of postponing if they did not want a remote defence.”

Expressing generous platitudes, Ferche said, “Special thanks to Colleen Kelly [CivMin Graduate Programs Coordinator] for organizing it. I am so grateful it was not delayed. I want to especially thank my supervisor, Prof. Vecchio for his kindness and for his guidance all these years.“

Prof. Vecchio opined, “Special thanks should also go to the committee Chair, Prof. Peter Herman (ECE), who did a masterful job under difficult circumstances.”

Ferche dressed up for an earlier Department Exam and did so again for the all-online FOE, but with one exception, “No fancy shoes this time!”

According to the School of Graduate Studies,

The first for FASE was Stephanie Cheung (Biomedical Engineering) on March 23.

The University of Toronto declared Thursday, March 12, 2020 in-person classes would cease on Monday, March 16, 2020 temporarily, as a measure to provide social distancing and protection from COVID-19.