and Co-Project Manager Ashley An 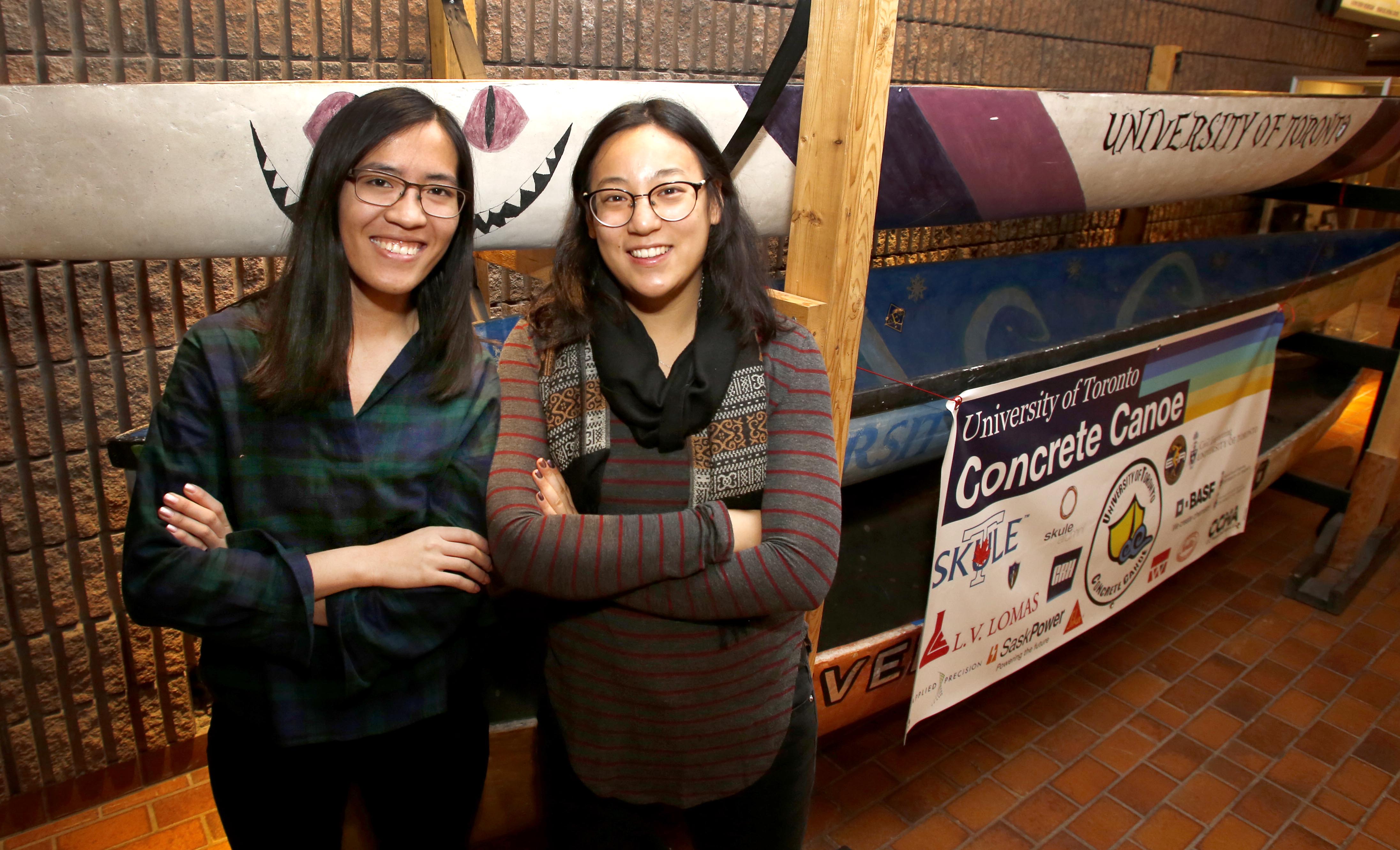 Natasha Valenton (Mech fourth year, left) and Ashley An (Civ third year) at the University of Toronto Concrete Canoe display in Sandford Fleming.The two are Co-Project Managers for the U of T Concrete Canoe Club.
PHOTO: Phill Snel, Department of Civil & Mineral Engineering/ U of T

Natasha and Ashley please tell us about yourselves.

Natasha  I’m in Mechanical Engineering, so I’m 1T9 plus PEY. So fourth and final year – excited to see what happens.

Ashley  I’m Civil Engineering 2T1 plus T1, so Track One.

Did you two know each other before Concrete Canoe Club? It is. Did you meet there? How did you team as co-captains?

Would you say it doesn’t matter what year you’re in, anyone can join the club?

Ashley  Yes, definitely. We’re really a hands-on group, so a lot of non-experience is appreciated because they learn on the job. It’s so easy for them to adapt within the club.

Natasha  You don’t need much previous skill because everyone on the team has learned all the practices, all of the tasks, while on the job. A lot of the executives like to explain what they’re doing, or how things works, so it’s just a whole new learning process. Even still for me.

Is there an election process to elect members? And is there a chance for somebody who’s brand new to get elected to a position, or does that take until the next year?

Ashley  We generally want members to gain as much experience as possible coming to our meetings every Saturday. Through that they’ll gain an insight into how our team actually works and what needs to be done in terms of the different roles that each executive need to accomplish. And through that, we do have an exec selection process at the end of the year after competition. It’s generally super relaxed and, as long as we see you’re committed to the team and we know that you would contribute a lot, then we will definitely consider you for a position.

What do you do? What is Concrete Canoe Club? Do you make one, or several, canoes?

Natasha  We make a canoe out of concrete every year for the Canadian National Concrete Canoe Competition -it’s run at a different university across Canada each year. We race it in the water and it’s judged based on the performance in races, the technical report and presentation and the overall final product.

Does each university get one entry or can they field many?

Ashley  If you have different campuses, you’re allowed to put in different entries. For U of T, it’s only the St. George campus. 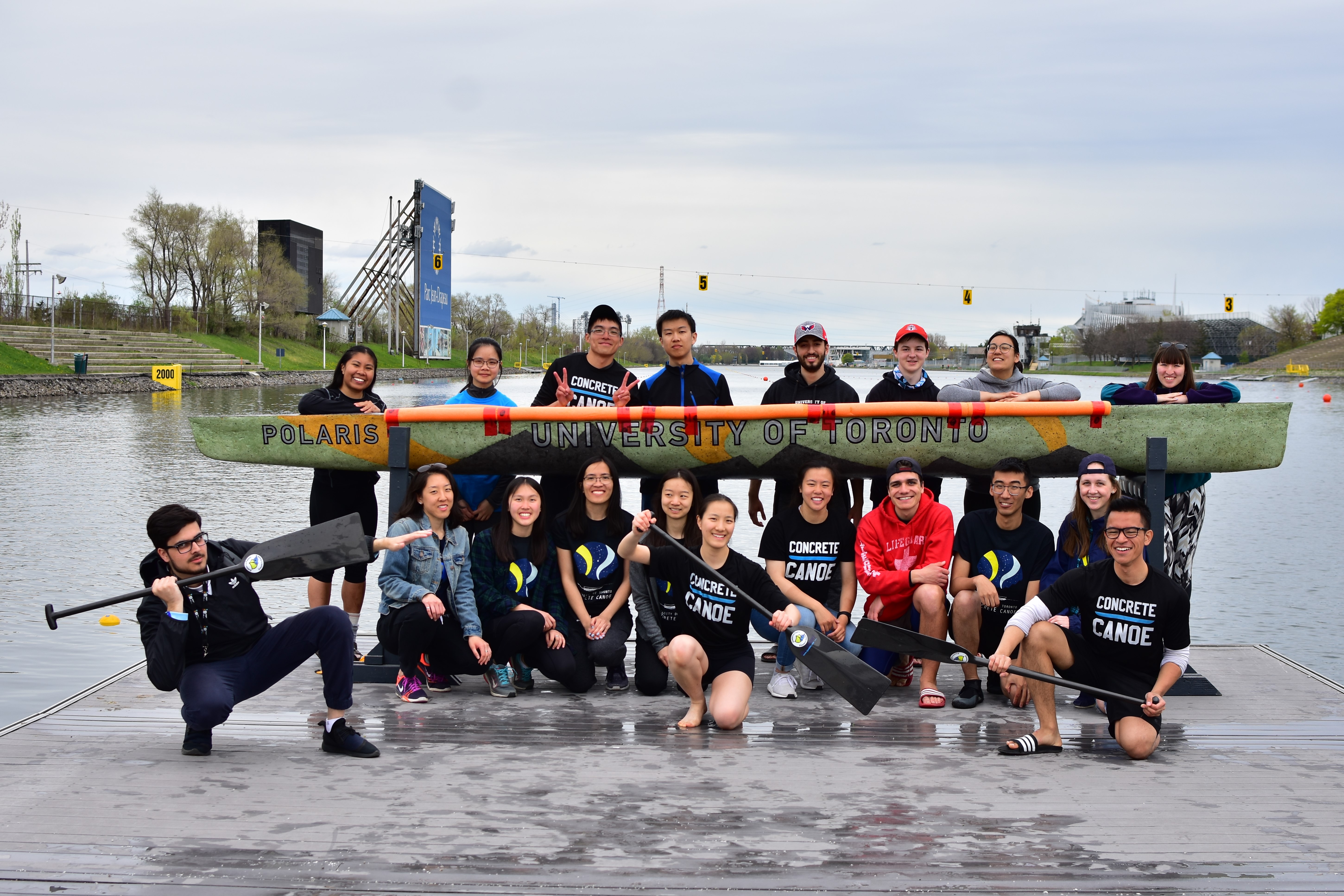 Our Team – Race Day, May 18, 2019, Olympic Basin – Parc Jean-Drapeau – Team members pointing towards Polaris. Team members posing with the canoe after a successful 5th place finish in races. (Ashley and I are in both of these pictures) IDS: Ashley – behind the canoe, second from the right, Natasha – directly in front of the canoe (not including those with the paddles) third from the left.

Are these things delicate? Do they transport well?

The canoes are pretty strong and are evaluated on their durability after the races for the final product scoring. In terms of transportation, we usually share a 26’ truck with Ryerson University’s Concrete Canoe team.  Although the canoes are pretty durable when travelling we like to ensure that they are well protected especially in long journeys. There are stories of other teams where they’ve driven across Montreal and because of all the bumps and the journey their canoe snapped in half. They were able to gorilla tape it back together and even competed in some races

So do you race on open water somewhere? Or is this an indoor pool situation?

Does everybody have a chance to actually paddle?

Ashley  There’s a separate paddling team, but we’d like to integrate everyone as much as possible. Natasha was actually captain two years ago.

Natasha  So I was a captain for that competition and it was really great. One of the things that really attracted me to Concrete Canoe is we get to paddle and race the canoe you make.

For competition how many people can paddle?

Ashley  We have different races. There’s a two-person sprint and an endurance as well, a four-person co-ed sprint. Last year, we tried to see how many people could sit in the canoe and with six people it still floats. We have pictures – some evidence! But for the actual competition, you can only register a maximum of 12 people. 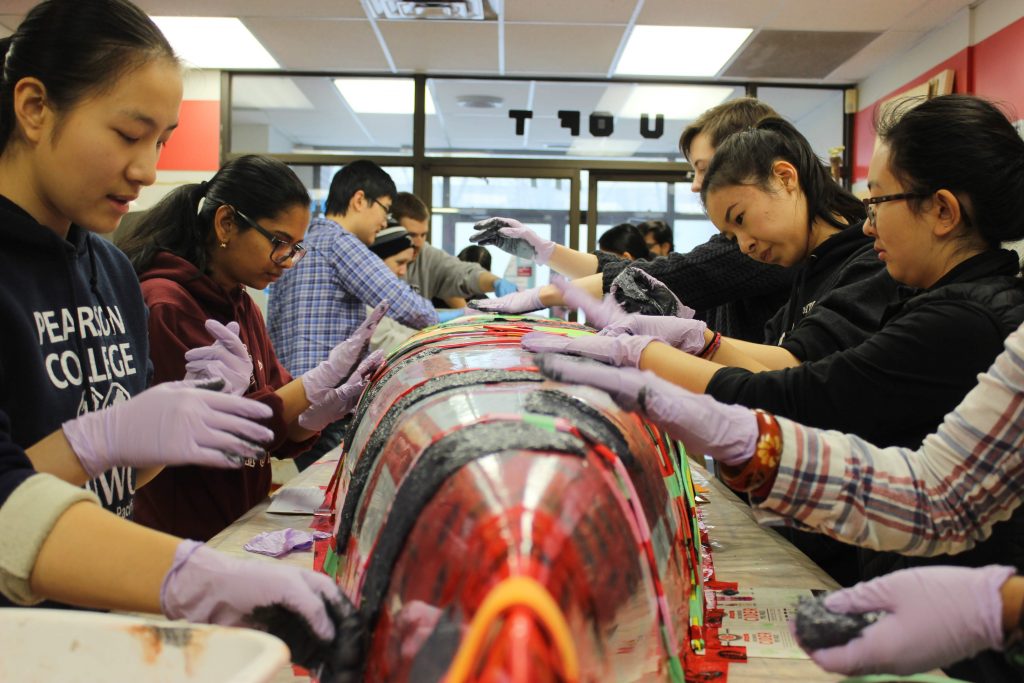 IMG_3899, IMG_3737 – Casting Day, Jan. 19, 2019, 704 Spadina Ave. (our old workspace) – Team members casting the concrete on a male foam mould of the canoe. Final picture of casting day with all members posing with the canoe before it is placed in a humidifier tent for the concrete to cure with sufficient moisture for 21 days.
IDS:
Ashley – on the right, 6th from the front in a blue shirt beside post of the humidifier tent.

What’s the most fun you’ve had during this?

Why should somebody join the Concrete Canoe Club?

Natasha  I find that the community is really good. When you’re there you’re having fun, get to talk with all the upper years, you get advice, you get mentorship, you get to bond over a certain thing and bond over what you’re making together. And then, at the end of the day, you’re making something pretty amazing.

Ashley For me, I guess it was more about the support. I joined in my first year and they were able to guide me and talk me through what I really wanted.

You’ve likely learned a variety of things as you’ve gone about various tasks. Has it helped you be a better project manager?

Natasha  Doing a project management role is pretty interesting. Seeing what is needed to make sure everyone coordinates together, because it is such a big project, is complex. We have a lot of people in their executive team roles we have to coordinate with and talk to, and seeing what each of them needs is completely different than what you would do as a general member.

You said you meet every Saturday to do this. And is everybody welcome to just pop in for the first time or should they contact you ahead of time? How would they find you?

Ashley  Everyone is definitely welcome. Our meetings are usually on Saturday at 11:30 a.m. It’s currently where our workspace is at 256 McCaul, although sometimes we travel to our secondary workspace in the Myhal arena. We have an email that goes out every week telling people what we’re going to do for that week and how they should contact us if they need any other advice about coming into the club. 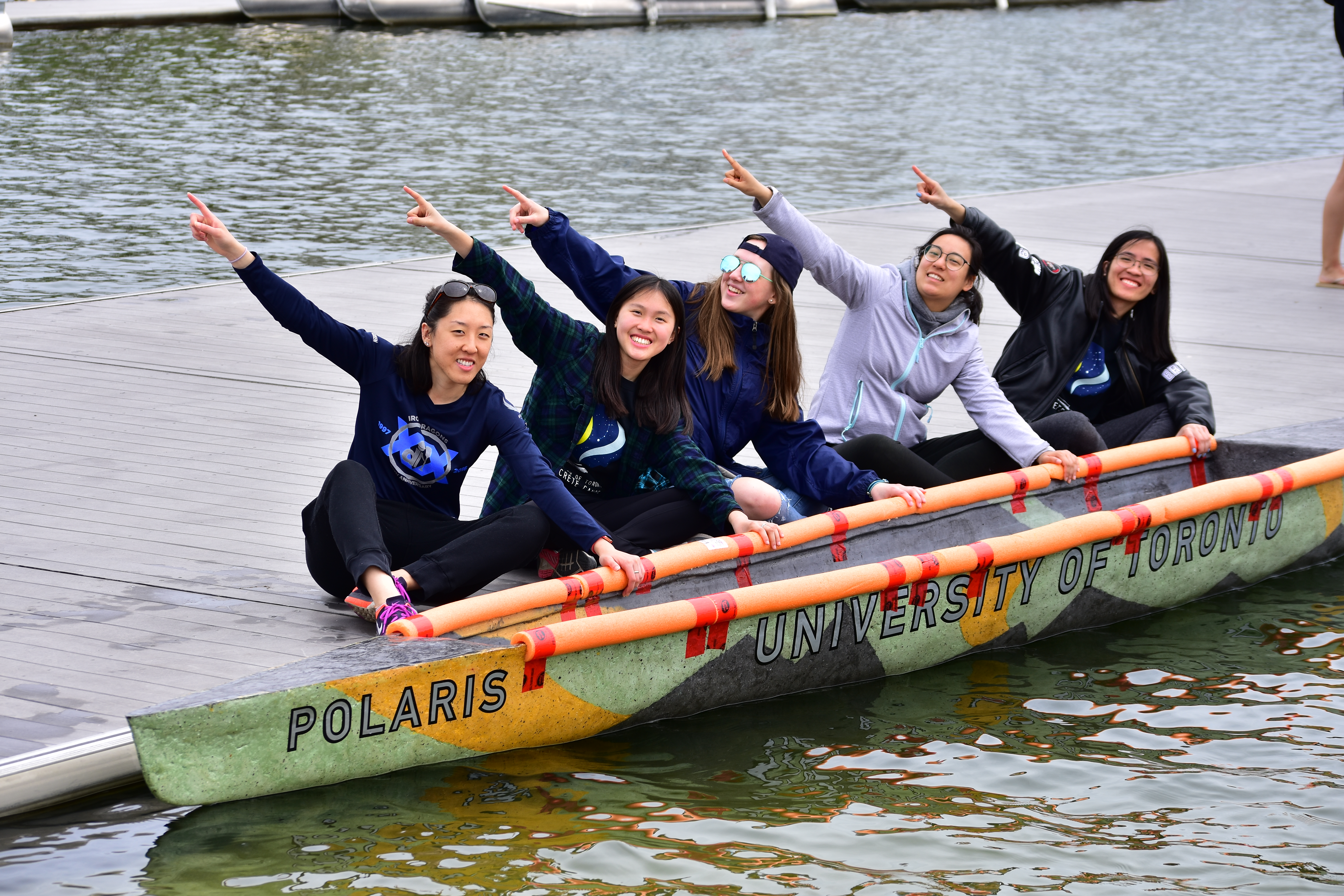 DSC_7021, Our Team – Race Day, May 18, 2019, Olympic Basin – Parc Jean-Drapeau – Team members pointing towards Polaris. Team members posing with the canoe after a successful 5th place finish in races. (Ashley and I are in both of these pictures).
IDS: Natasha – rightmost,
Ashley – second from the right

Is there a lot of history to the club?

Ashley   The University of Toronto has competed in the Canadian competition since it was conceived 25 years ago, so we definitely have a lot of alumni who come back too.

Natasha   It’d be nice to connect with all of the alumni, because there’s a wealth of information whether it’s telling you stories about back in their day when they were doing when they’re casting their canoe how they do it and comparing and like talking them and sharing them. As well as any of our problems that we’re having now. And  getting that chance to connect, that would be awesome.

Is there anything else you can think of I didn’t cover that should be?

Natasha  Yes. Concrete Canoe is pretty multidisciplinary. There’s so many different aspects of our team from the concrete and structural side, and overall design, to the paddling and finance, to outreach. It doesn’t matter what discipline you are from, because you’re able to really learn on the job and grow into a role.