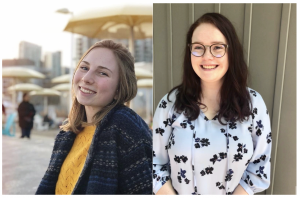 Tell us about yourselves:
Elisabeth: I’m Elisabeth but most people call me Liz. I’m MECH 2T1 and I’m currently doing my PEY at a biomedical engineering company called Profound.
Georgia: I’m Georgia Collins and I’m a third year Civ student.

Any Hobbies?
Elisabeth: I play basketball and softball recreationally. I’m also new to fostering cats. I got a cat today so it’s very new, her name is Squeak and she’s really cute. I fostered her through the Toronto Cat Rescue.
Georgia: I really like oil painting and I like travelling a lot. Normally, I’d be travelling a lot more than I am now. My first destination would ideally be Germany. I’ve lived in Germany before so I’d love to go back to see my high school friends.

How did you get involved with Concrete Toboggan?
Elisabeth: I was always looking to join a design team. I’m into biomedical engineering so I never even thought about Concrete Toboggan. But last year, some of my friends said my skills would be good in a design, because I have a lot of hands on experience. So I tried it and I loved it and I’ve been here ever since. This is only my second year on the team but I got involved because it’s a way for me to apply what I’ve learned in mechanical engineering into an actual thing I can build. Even if it isn’t what I go into as an adult, it’s really fun. I love a team atmosphere, I love sports and this is just like a sports team but with design.
Georgia: I got involved in first year early on. I went to an initial meeting and I didn’t know anything at all but I really liked the people on the team. So I became friends with them and started going to more builds. I liked working with people of other disciplines because I got to hear about things I wouldn’t have ever heard about in my program in Civil Engineering. In second year I got to apply what I was learning in class, when we were doing the concrete fabrication, which was really nice. I applied for a captain position this year because I really enjoyed being on the team and I wanted to move up into more of a leadership position and have more responsibility.

What does the Concrete Toboggan Club do?
Georgia: Concrete Toboggan is a design team that focuses on building a concrete toboggan, which is an unusual thing. It has four main requirements, a concrete running surface, a shell, a steering mechanism and a braking mechanism.
Elisabeth: A misconception is that the toboggan is all concrete but it’s only our skis, so it’s only what's contacting the snow that has to be made of concrete. The rest is all mechanical or carbon fibre. Originally, the competition was just a slab of concrete but eventually it got more sophisticated and people added steering and braking systems.
Georgia: This year we have electro-mechanical steering, which is much more advanced compared to a just a slab of concrete. 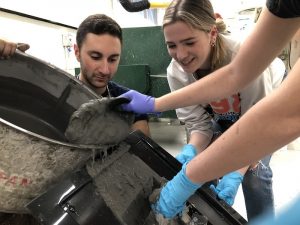 How is it now that everything is online?
Elisabeth: Normally we’d have an in-person competition in February and we would race our toboggan and there’s a technical exhibition. But because of COVID it’s been moved online. The equivalent competition is, we still design a toboggan, and we still cast it and come up with a theme. A big part of the competition is also the theme and spirit side. Every year we come up with a new theme. This year our theme is “Bogglympics,” which is Olympics themed. So the competition is still being held but everything that would be in person has an online equivalent or is cancelled.

Do you come up with the theme collectively?
Georgia: That's the unique part about us as a design team, and many design teams don’t have this. The theme is a big part about the competition we go to and a big part of what unifies us as a team. So it’s collectively decided upon. Typically previous year’s members come up with something in the summer before the school year but then it's developed throughout the year.
Elisabeth: Our team is divided into two sub-systems, we have the design side and spirit side. Design is focused on the design and fabrication of the toboggan. Whereas the spirit side focuses on the theme and spirit challenges. We also have a technical exhibition where we display our fabrication and design process. There are games and interactions and that’s the spirit side of things.

Where are the competitions typically held (in a normal year)?
Georgia: It’s at a different location every year, last year it was in Toronto at Snow Valley. This year it was supposed to be in Calgary. It’ll be pushed a year, so next year it will be in Calgary again.
Elisabeth: Typically, it alternates between East Coast and West Coast, so after Calgary it’ll be on the East Coast again. It’s an international competition with a few teams from the U.S. even.
Georgia: Fun fact we’re the largest student run engineering competition in North American.

Aside, from winning the competition, what would a successful year of Concrete Toboggan look like to you?
Georgia: We were successful in winning last year but the biggest success was how tight knit the team became and the friendships and connections you make within the team. And also, on the design side of the team, it’s important to push ourselves and always strive for the newest innovations. That’s something that makes us standout at competitions. I would say we really lead the pack in some ways in innovation.
Elisabeth: As Co-captain, what I would say is a successful year for me is seeing new members join the team and grow and seeing their development. Especially with the hands-on aspect, you really learn a lot in a short period of time. It’s really impressive to see first year's or first time on the team member’s growth from the beginning of the year to competition. 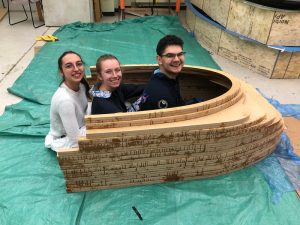 How can someone get involved?
Elisabeth: What’s unique about our team is it’s open to anyone. You can join any time during the year and you can be from any discipline, even Arts. Our competition team has 30 people already but even if you can’t get to competition you can still help with the design and spirit side of things and we really encourage people to come out and get involved.

To join you can visit our website or follow us on Instagram and we post about general meetings. We have general meetings once a month. You don’t have to have attended any prior meetings, you can just drop in. You just have to show up one day and that’s how you join. You can definitely DM or email us to ask any questions.

When are the meetings held?
Elisabeth: Typically it’s on Wednesday, but it varies month to month and it’s on Zoom. We post about it a week before on Instagram, so if you follow us you can stay up to date.

What’s your best memory of Concrete Toboggan?
Georgia: My best memory was getting the chance to ride in the toboggan. It’s five people that get to go in the toboggan. Last year we were really fast and kept winning every race. It starts off with a speed run, so you run individually down the hill and they test your time. Then typically there’s a steering test and then eventually you go head-to-head with King of the Hill. In King of the Hill you keep running your toboggan down continuously trying to beat your opponents. It was really exciting that whole day and full of adrenaline because we just kept going up and down. Eventually we won, and the feeling of coming out of the toboggan at the end and having the team rushing toward you and banging on the toboggan was really exciting. It felt like all our hard work paid off, which was really nice.
Elisabeth: Obviously winning the competition is a huge part that stands out in my memories but last year, on competition day, after the first run, the ski attachment sheared off so there was a crack. It could no longer keep the ski to the toboggan, or if we were to run again it was at risk of failure. So in between runs I had to go to our van and use this super glue. It was a metal binding glue and you’re not supposed to apply it with your hands but we had no choice. It was freezing cold and we were scooping it with our hands and smearing it on hoping it would keep the ski and the ski attachment together. I really enjoyed the adrenaline and rush and it worked! Our toboggan ended up winning! 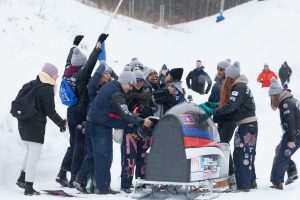 Anything else to add?
Elisabeth: It can be intimidating as a first year student or if you haven’t been that involved in school, to go to a club for the first time but we have new members joining all the time, it’s very open. Also, all the upper years are very welcoming on the team. There’s a family and friendship that bonds the team really well and that’s what's unique about our design team. We build lasting friendships.