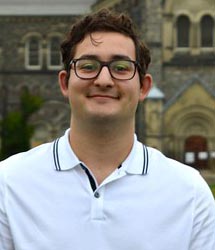 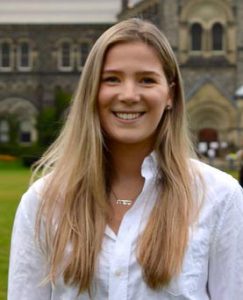 Please tell us a little bit about yourselves.

Sophie  I’m a fourth year civil engineering student, and I just came off my PEY. This is my fourth year on the team; I started in second year. I’ve done many different things on the team: I was a general member, then I was the concrete lead, and then I was the theme lead and the captain. I’ve kind of done everything I wanted to do, which is great.  I’m from Calgary – I moved to Toronto for school and didn’t know anybody here.

What made you join the team?

Sophie  I just heard a lot about it in first year. A lot of people I’m surrounded with had really good things to say about it. They talked about it in such a positive light, compared to a lot of other design teams, I feel like have as more of a stressful light. I thought, “Sounds great, I would love to join a team like that.” I didn’t really know how to join the design team, so I kind of just patiently waited until I figured out things midway through second year. And they just threw me into hands-on work.

Michael  I’m an EngSci 2T0. This is my third year on the team. My first year I was a general member, then in second year, I was the captain, then captain again. I got involved with the team because a lot of friends and others were talking about it. In first year you’re kind of just figuring things out, and what I like doing and all that stuff. I didn’t really consider joining the design team. But then as I started making friends and they said there was this thing – it’s a design team you get to work hands on. No experience required, just kind of show up and we’ll teach you everything, so I just kind of started showing up to things. And then it’s kind of sparked from there. I’m from Mississauga. 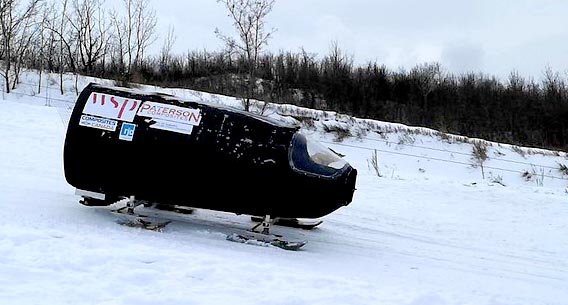 You joined in second year. What held you back from joining in first year? Should students wait, or should they just go ahead and join in first year?

Sophie  I definitely don’t think that you should wait, now that I’ve been on the team, because there’s so many opportunities to be on the team. You just have to come out to a few things and you don’t necessarily need to spend your entire life doing it. I think that’s the misconception with a lot of design teams is it becomes your personal life. Whereas we’ve chosen that for fun, and it’s now our personal life, but that’s what stopped me in first year. I thought, I’m already very overwhelmed with school, so I shouldn’t be doing something else. But now then looking back on it, I it would have just been an added enjoyment to my life.

Michael  In first year I was trying to figure out how to do university, making new friends, and so I started with the idea we’re going to focus on that community look at the clubs and stuff. But I think our team makes it very easy for first years to get involved. We do try to make tasks into several small projects, so that people can take ownership of that small projects. Some of them can take three or four weeks, or can take just a couple days. We kind of give them the option of taking on however big a challenge they’d like.

So you can ease somebody into a small role and they can take on greater responsibility if they like, or if they feel ready. I guess you’re saying it doesn’t need to be intimidating; they can just come on in and be part of this social group and take on something small or earn their way up to a bigger task.

Sophie  I’d say so. I feel like a lot of our current leads started that way. They started by reaching out and being like, “Hey, is there any work that I can do?” And we gave them a little bit, such as helping with designing the ski attachment, and now they’re a lead and do doing like steering. So it just kind of escalated from there. They get to get comfortable, and then they can do a little bit more.

Is there a regular time that you meet that somebody could just drop in and see what it’s all about?

Sophie  Over the summer, we had regular weekly meetings. Now it’s getting a bit more regular because we’ve started our builds, so we’re actually now doing concrete. We’re going to be working on our technical exhibition. So it’s a little bit more inconsistent, I would say, but we do send emails about everything we do and where we meet. There’s also Slack, so if anyone wanted to join us, they can come through there too.

Obviously this is all leading up to a competition. Where and when will this be, and how many people will attend?

Sophie  It will be from January 29 to February 2, so it’s four days long. And, for the very first time, it will be in based in Toronto with the competition slope in Barrie, Ont. It’s close by, so everyone can come out and watch this race. There will be 600 engineering students there from about 20 different schools all over the country, as well as one from the U.S.

The competition also has allowed for alumni participation. Every year it alternates between East Coast and West Coast. This year will be in Toronto, and since we’re local we’re actually bringing in alumni team races to participate in the competition.

What sort of alumni turn out for these events?

Sophie  A couple years ago, when we were in Waterloo, I think it was the 1998 team came with their toboggan. Their safety standards weren’t the same back then, but it was the coolest thing I’ve ever seen. It was a circle, and it spins as they go down and they’re all strapped in. It’s very, very cool and we definitely cannot get away with that now. But it was a feat of engineering on its own, I would say, and the original team raced their own toboggan.

Do you feel you’ve learned quite a bit from second year to your position now?  Have you grown in your knowledge, experience and designs? Has it helped you professionally somehow on how to lead a project and to take on responsibility?

Sophie  I think so, because I specifically work in more of a project management field, especially when I was  working consulting. It helped to manage people and organize my life, and tasks given to me, and how to work with a due date – when to start it and finish it. So I think it helps a lot with dealing with the real world workforce too.

Michael  Yes, definitely. I’m studying robotics, but a lot of things I’ve learned are not in that field, which is great. I’ve learned a lot about composite materials and a lot of mechanical things that I would not otherwise have been exposed to. A lot of these things are very new, and not taught in your everyday course, so definitely taught me a lot more about some technical aspects of engineering that aren’t related with my program.

Sophie  Yeah, I feel like a lot of like, our design team is just problem solving and learning how to problem solve and being able to configure it in your head properly. I think I’m getting better at it.

Is it okay to make mistakes? And have you learned from your mistakes?

Michael  Every year, at the end of the year, we have a final wrap up where we can discuss that went wrong in that year.  We pass this on to the next year, so we can prevent the same things from happening again.

Sophie  We really like to invite general members out to that as well, because they might not necessarily have been around for the mistakes as they might have joined the team after design, or closer to the competition. So when they come to that meeting, they get to hear everything, whereas they might not really know what was going on in the background. But now, since they’re going to be the new leads, they get a good introduction to it. Then there’s also a formal document that summarizes everything for them.

Are participants from different departments or different disciplines? Are they welcome just as much as anyone else?

Sophie  Absolutely everyone is welcome to join; it requires absolutely no experience. I think when people hear concrete they get a little bit scared, but we have every single discipline on our team. We’re very inclusive and proud of that. Even if you’re not a Civ, please come help with the concrete things; even if you’re not a Mech, please come and help with the design of steering and braking. There’s no restrictions – it’s very easy to learn and we’re open to teaching it.

Michael  One thing about needing a multidisciplinary team has a lot to do with the fact we’re so diverse in the things we do. So we are in a lab pouring concrete, but we’re also designing mechanical systems, we’re also building a display out of wood, dealing with lumber and painting, and we’re sewing our own costumes.

Sewing your own costumes?!

Sophie  There’s a spirit portion to competition which is part of your overall score. You have to be having fun, you have to be cheering, you have to have an entire theme that goes into the event. This year our theme is postal workers, we will be dressed up and we’ll be delivering mail. It’s an added little fun thing to competition.

Last year we were cavemen and the year before we were Greek gods – there was gold glitter involved with that. It adds a unique portion to the event and more possibilities. Some people might be interested more in painting or sewing – we have opportunities for most everyone to get involved.

Do you ski back home?

Sophie  I was a ski racer for 15 years. Maybe this is my calling to the next level!

U of T Concrete Toboggan: http://www.toboggan.skule.ca/