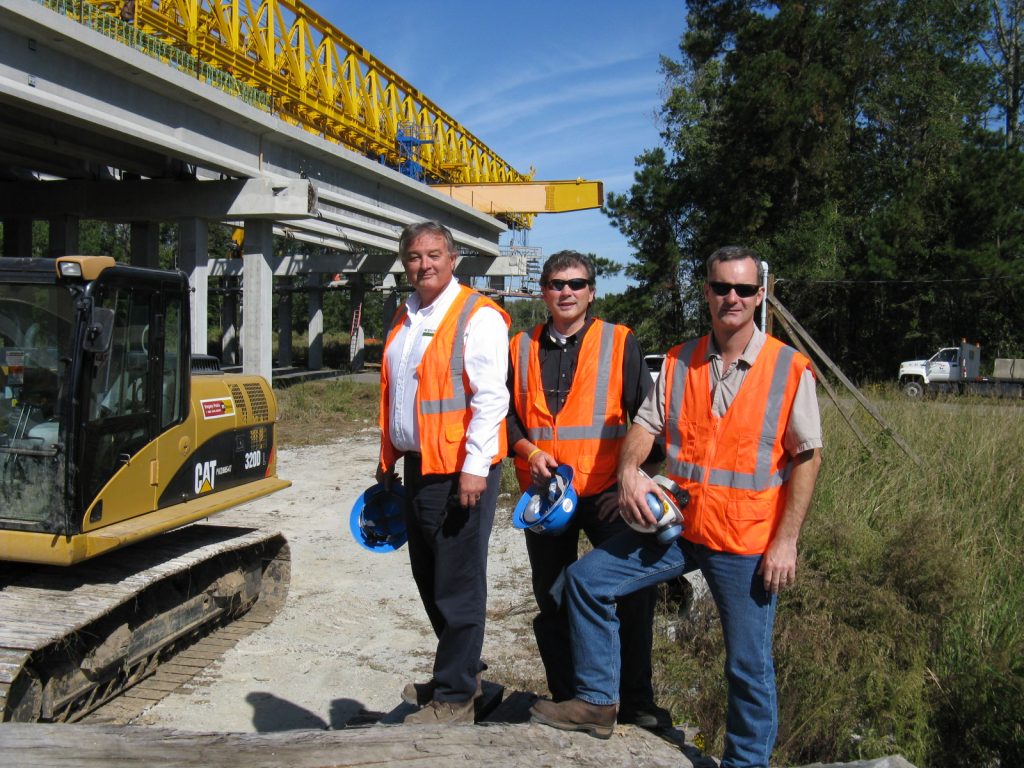 A “top down” bridge construction equipment in 2008, designed and built by Bermingham, with (L to R) Peter Smith, Stefano Gabaldo (both with Bermingham Foundation Solutions) and Mark Mallett, Project Manager for Flatiron. The eight km long elevated expressway was built over environmental sensitive wetlands for the Washington bypass. (Provided by Peter Smith)

Peter Smith, the newly elected chair of the Residential and Civil Construction Alliance of Ontario (RCCAO), has strong ties to U of T’s Department of Civil & Mineral Engineering.

In a circuitous journey, Smith started his engineering education at U of T in 1972, then by his third year found himself employed in the industry. Though completing his engineering degree at “another institution,” he maintains strong ties here where he started.

As executive director of the Heavy Construction Association of Toronto (HCAT), Smith has generously supported new development efforts at U of T’s Survey Camp on Gull Lake, near Minden, Ont. With construction of the HCAT Bunkhouse currently underway, the new versatile facilities will benefit future generations of students attending camp.

Advocacy
Smith’s role at the RCCAO, a unique alliance of labour and management construction groups, is to advocate for investment in Ontario infrastructure. “The City of Toronto is about $1.3 billion short of the monies they need for their budget,” Smith says. “We’re trying to encourage the provincial government, and the federal government to step up and help big cities. For example, in Toronto the Gardiner Expressway is crumbling. We have a big rainstorm and the city needs to release raw sewage into Lake Ontario – there was one day last year they released one billion litres of raw sewage into the lake. Those are some of the upgrades that we would like to see done; the only way you can do that is with capital works.”

This message seems all the more pressing during the pandemic, Smith emphasizes, as capital works can have a trickle-down effect on employment and the economy.

Civil by chance
The road to a long career in civil engineering began by chance. “I started first year in chemical engineering and ended up getting a job in the summer at a refinery in Mississauga (Ont.). All along the lakeshore there were oil refineries, but they’re all long gone now. I applied for a job as a process engineering student, but ended up getting a job in in drafting and construction, because they only hired students after their second year in process. I realized I liked it a lot more.”

“Personally, I think civil is the best field to be in, because there’s such a huge variety. If you like the outdoors there’s opportunities, you can be in environmental, you can be in building science and structural, as well as all types of construction. It is incredibly varied.”

Career highlight
“I’ve been privileged to be involved with big projects here in Canada, working in all three oceans,” Smith says. “In Asia things can sometimes be far larger in scope. In was in Hong Kong as they were building a six-lane elevated highway, which was twenty six kilometres across the ocean to go to Macau.”

Smith further explains, relaying the immensity of the task, “As it’s right across the open ocean, with ships transiting the route, so at one point it drops down into the ocean and then back up again. They built two islands to allow the highway to drop down underneath the ocean floor for a kilometre – it was just an absolutely mind-blowing civil engineering project. The scope is incomprehensible. Our company was making some very specialized drilling for this, and it was pretty amazing to see that as a civil engineering moment.”

Develop your people skills
Besides working on enormous projects around the world, Smith is quick to also mention he’s met some really interesting people during his career. The ability to work well with others is a skill some engineers may not realize they need.

“People get into management and so you’ve got to work with your soft skills too – engineers are notorious for being introverted,” notes Smith. “I would advise any young engineer to not ignore non-technical electives they think they’re being forced to take.”