Designed to fail: an elegant solution to save buildings during earthquakes Civ PhD Candidate Pedram Mortazavi, MASc, P.Eng, poses with a cast steel link in the Structures Lab at the University of Toronto’s Department of Civil & Mineral Engineering in Toronto. His thesis is titled: Cast Steel Replaceable Link Elements in Steel Eccentric Braced Frame (EBF), and is designed to allow a specific piece of a building structure fail in an earthquake so as to allow the structure to remain intact. The sacrificial piece is designed to be standardized and replaceable afterwards.
PHOTO: Phill Snel, Department of Civil & Mineral Engineering/ U of T

Pedram Mortazavi, a CivE PhD candidate in structural engineering under the supervision of Professors Constantin Christopoulos and Oh-Sung Kwon, is championing work to mitigate earthquake damage to buildings with a focus on at-risk areas of the world. In recognition of his work in this area, Mortazavi will receive the G.J. Jackson Fellowship Award from the Canadian Institute of Steel Construction on Tuesday, October  1 at a ceremony in Montreal.

Earthquakes occur suddenly, and usually without warning. When they occur near populated areas, it typically leaves a trail of devastation in its wake, including lost lives and unsafe buildings. Every event results in renewed concerns about widespread damage to buildings and infrastructure in earthquake-prone zones, leading researchers to develop solutions that will help the structures in these communities be more resilient to the shocks of an earthquake.

Mortazavi’s thesis, Experimental Validation and Performance Assessment of Cast-Steel Replaceable Links in Steel Eccentrically Braced Frames (EBFs), sounds complex, but is elegant in its simplicity. In essence, the solution to save buildings from catastrophic failure is to assign pre-determined pieces of the building’s structure that are designed to be sacrificed. Using steel castings for seismic applications, an area that has been pioneered for the past 15 years at the University of Toronto, allows for the sacrificial piece to encompass the optimal stiffness, strength and ductility properties to adequately protect the structure from the severe loading effects of earthquakes.

It might seem counter-intuitive to design for failure, but by designing a specific portion of a structure to absorb all the deformations of an earthquake, it allows for the building to remain structurally viable. And, according to the plan, the designated piece(s) can be replaced after they are damaged by an earthquake.

Mortazavi neatly sums up the project: “What we’re doing in the project is to develop an off-the-shelf product by using all the advantages offered by steel castings that will not only improve the performance of the structure in the event of an earthquake, or any extreme events, but would also ease the construction process significantly. Imagine instead of doing a detailed design and having to make a custom element, you can simply order it from a catalogue.” 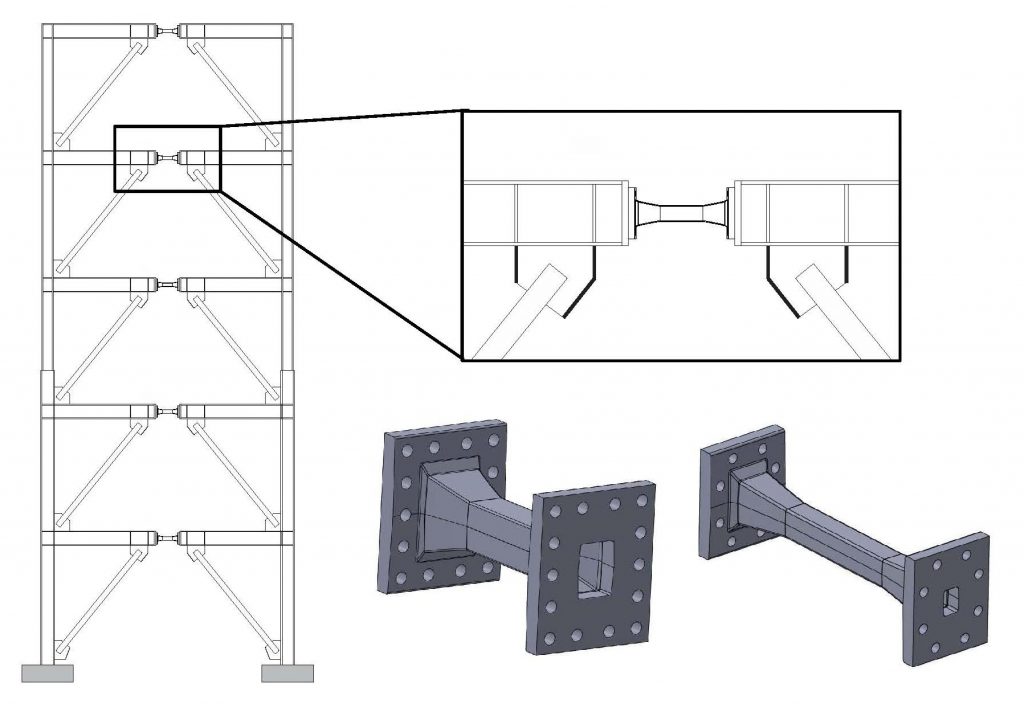 “The portion of the beam that is between the braces acts as a fuse. So when an earthquake happens, you have very large forces generated in the building and transferred to the ground through the building. If that happens properly, the building won’t collapse or deform too much past the point of being repairable. If, however, the structure deforms too much, it could sustain significant structural damage, and at this point, it may be easier to completely demolish the building,” he said.

Alumni Carlos de Oliveira (CivE MASc 2006) and Michael Gray (CivE 0T5, PhD 2012) figure prominently in the project too. “Based on their research as students, they founded Cast Connex, an industry-leading company in the area of cast steel. I’m working very closely with Dr. Gray, which is interesting, because he’s also a former recipient of the G.J. Jackson Fellowship (CISC) and the Donald Jameson Fellowship (CSCE), both awards I received this year,” said Mortazavi. Mortazavi is also working closely on his project with Justin Binder (CivE MASc 2015) who leads the new products development team at Cast Connex.

Asked if the product might soon be implementable, he says, “Within five years, or so, would be my guess. We should be able to wrap up the research program within two years. But structural engineering is a discipline where taking an idea from innovation to implementation can be a lengthy process so I’m rounding up.”

For now, though, the full-scale testing of the cast steel links continues at U of T. “When it comes to testing new ideas and new systems in the lab we have to test them realistically and with the most accurate methods. That’s where Professor Kwon’s unique expertise is incredibly valuable.”

Kwon echoes their mutual respect, “Pedram is one of the best students whom I supervised so far. He is very organized and has very solid technical background. In addition, he can work well with other students, industry partners, and technical staff which make his project run smooth. I am confident that he will be an excellent researcher and/or engineer with his strong technical and people skills.”

In California, after a major earthquake in 1971 it was mandated that more than 8,000 unreinforced masonry buildings with highest risk of collapse be retrofitted. In Canada, previously-built structures are “grandfathered”, and are not always required to follow the building code. Mortazavi believes that if Canada were to adopt a system similar to that in California, “it would definitely ensure that we have a more resilient community in the event of an earthquake.”

“My research advisor, Professor Christopoulos, also says ‘Ultimately what we’d like to do is have a city where an earthquake happens, and no one is worried about it,’ You can just sit tight, for a few seconds or a minute while the earthquake comes and goes, and then the building could be quickly re-occupied without any major disruption.”

Christopoulos further emphasized Mortazavi’s capacity for producing high impact work with his project: “ Pedram’s strong academic background, real industry experience and his close collaboration with leading innovators like Gray, Binder and deOliveira makes it a real possibility that what he is now developing may one day be protecting hundreds of buildings in North America and beyond. The experience he is gaining in this challenging process, from R and D all the way to tech transfer in this project, will give him a strong basis to continue innovating and impacting our field after graduation.”

Julie Audet, Vice-Dean of Graduate Studies at U of T, had kind words in reflection of Mortazavi’s TA Teaching Excellence Award in 2018, a first for the Department of Civil & Mineral Engineering, “Pedram is not only a world-leading researcher in earthquake engineering, he is also an award-winning educator. I first met Pedram when I was trying to get in contact with award-winning teachers at U of T to help with training new teaching assistants in FASE. I found the recipient list for the 2018 teaching excellence award where Pedram was listed. I contacted him and he immediately accepted to organize a training session. Pedram is extremely gifted and always eager to give back to our faculty.”

So why study structural engineering?

A 2003 earthquake affecting Bam, Iran registered a magnitude of 6.6 on the Richter scale and created an indelible memory for Mortazavi, then a boy living in Tehran where his father was a structural engineer. The earthquake killed over 26,000 and injured some 30,000. He recalled thinking about the buildings, primarily mud structures that collapsed completely, “We’ve been to the moon, so why can’t we keep these buildings standing during an earthquake? What’s the problem? That was definitely a factor pushing me in the direction of my studies.”

As for why he chose Canada, the reply is immediate, “I came to Canada, because of its reputation for excellence in education and because it is one of the most welcoming nations. Probably the most.”

Mortazavi, at U of T for his PhD since 2016, is humble about the work he’s doing in the full-scale Structural Testing Facilities and gives credit to his predecessors. “It’s not just mine. Our colleagues at Cast Connex have also worked on it and research was also initiated by Professor Christopoulos and his former student. We’re just passing off the torch.”

Q: How much do the steel links weigh?
A: The smallest is around 120 kg (260lbs) and the biggest is about 275 kg (605lbs) Q: At what level do they fail? Or not snap, but simply become deformed?
A: They can sustain significantly more deformation, compared to the conventional ones. Our prediction is probably 1.5 – 2 times greater. The conventional ones fail at 0.08-0.12 radians rotations. We are expecting these to perform well up to rotations of 0.16 radians.