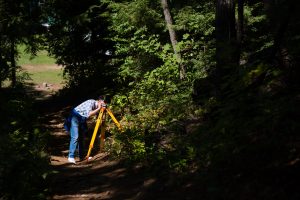 Celebrating its 100th anniversary in 2020, Survey Camp is a long-standing Department tradition. After being acquired in 1919, the inaugural student group journeyed 200-kilometres north of Toronto for an unforgettable immersive field educational program in 1920. Today, as many as 200 Civil and Mineral Engineering students annually participate in the CAMP experience to better prepare them for their engineering professions.

After 100 years, the CAMP (Civil And Mineral Practicals)curriculum continues to evolve reflecting the changing requirements necessary for successful, skilled engineers. While surveying remains an important component there is also an emphasis on environmental, social, economic and sustainability leadership – inspiring students to effectively steward our planet now and in the future.

As the Department of Civil & Mineral Engineering deepens its expertise in hydrology, water chemistry, limnology, and mine tailings reclamation with Professors Jennifer Drake and Lesley Warren, Module 3 is undergoing a significant expansion with investment in ‘Sustainable Water Resources’.

These new assets will support a module focused on water management, water quality modelling, and holistic sustainable design. The focus of the module is an assessment of the quantity and quality of water in and around Gull Lake over time, providing data for modelling phosphorous loading modelling eutrophication risks. Student generated outcomes from this module may potentially contribute to the design of future CAMP expansion projects.

100 Years Young
To celebrate CAMP’s Centennial, a $1.5M renovation plan has been approved to update and expand the Gull Lake site. Preserving the 100-year history of CAMP, the plan embodies the historic legacy while providing for our growing needs to educate the next generation of engineers.

These initiatives address vital issues to support CAMP into the future including: providing greater accommodation for female students (who now make up over 40 per cent of the class at camp!) and an increasingly diverse population; provide a living lab for research initiatives, outreach programs and other educational programs during non-CAMP seasons; and protect and preserve the historic legacy of CAMP.

Construction is slated to begin in 2019 and we are approximately 65 per cent towards our $1.5M goal. The University of Toronto has shown its commitment to CAMP by offering a generous matching opportunity. Through this year, all gifts to CAMP will be matched dollar-for-dollar, up to $750,000.

In the Fall of 2019, we look forward to inviting all supporters, alumni and friends to a Centennial reunion celebration. Please check civmin.utoronto.ca for more information as it is available. Thank you in advance for your consideration and generous contributions. We are built on the unwavering support and donations from Department supporters like you.

Special thanks to everyone who has contributed to the campaign for CAMP as of September 5, 2018: