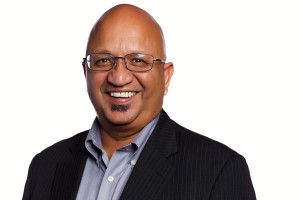 Many of our alumni volunteer with U of T Engineering. In celebration of National Engineering Month, we turn the spotlight on those that go the extra mile by volunteering in the greater community. From climbing one of the Seven Summits for charity to surgical education and research in Africa, our alumni are passionate about giving back. This story is the fifth of a five-part series.

It’s been over 20 years since Arun Channan (CivE 8T0) was a practicing engineer, but his background in civil engineering led him to become a volunteer with one of Canada’s most reputable non-profit housing organizations.

“I thought Habitat for Humanity would be a good fit, being hands-on construction,” said Channan, a Richmond Hill, Ont.-based management consultant. “That’s how it began.”

Channan became hooked on Habitat for Humanity after spending a few days volunteering at a build site and immediately wanted to become more involved with the organization. In 2008, he took on the role of president of the Board of Directors for the GTA York Region office. For four years, he dedicated a few hours each week to Habitat For Humanity-related projects and led a monthly board meeting.

Channan said the GTA York Region board was relatively hands-on and worked directly with the executive director on day-to-day operations — everything from purchasing land to issues with particular building projects.

A particular highlight for Channan was opening a Habitat for Humanity ReStore in Vaughn, Ont. A ReStore is a retail store concept that accepts donations of overstocked, seconds, used, discontinued items and salvageable building materials donated by manufacturers, stores, contractors and individuals.

“It’s hard not to be proud of all the work that we did,” he said. “But we only had one ReStore at that point in Newmarket, so opening a second one in Vaughn was a big step for us.”

When career demands became too overwhelming, Channan stepped back from his volunteer commitments with Habitat for Humanity in 2012.

“I started to travel a lot for work and when I began to miss my own board meetings I knew it was time to step down,” he said.

He has continued to contribute his time and expertise to U of T Engineering as an active volunteer with the Skule™ Society and the Department of Civil and Mineral Engineering. His company,myndwerx, continues to be a corporate supporter of the Habitat for Humanity GTA York Region office.

Looking to volunteer at U of T Engineering? There are many rewarding student-focused, Faculty-level and University-wide volunteer opportunities for alumni. Make a connection, share your experiences and inspire the next generation of engineers today.