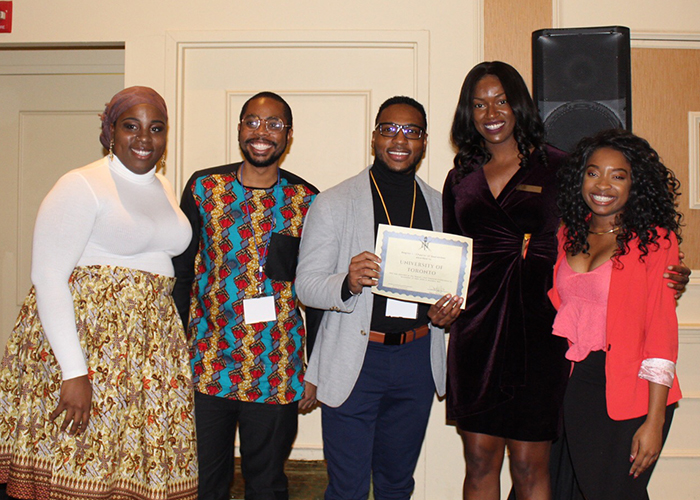 When Shane Arnold (CivMin MEng) saw that U of T Engineering was offering travel grants to attend the National Society of Black Engineers (NSBE) Fall Region 1 Conference (FRC) in Danvers, Mass., he got a second chance to connect to an organization he’s always admired.

“I didn’t realize until my final year of undergrad at McMaster that they had a NSBE chapter,” said Arnold. “Now as a graduate student at U of T, and seeing this opportunity to go to the conference — it opened the door to connect with the U of T chapter, as well as the chapters throughout the U.S.”

Arnold was among three U of T Engineering graduate students who attended the NSBE FRC in November. Delegates got to build their professional leadership skills, gather career advice, participate in case competitions and network with nearly 1,000 engineering students from across the east-coast regions of the U.S.

The trip was funded by U of T Engineering and initiated by its graduate office as well as Mikhail Burke (MSE 1T2, IBBME PhD 1T8), Dean’s Advisor on Black Inclusivity Initiatives and Student Inclusion & Transition Mentor.

Burke, who travelled alongside the students, not only saw a wonderful career advancement opportunity for students but an opening to recruit prospective graduate students to U of T Engineering. Shane Arnold and Mikhail Burke meeting with students interested in learning about graduate studies at U of T Engineering.

As Burke guides efforts to increase Black representation in the Faculty, he says the conference is just one example of how U of T Engineering can build new pathways towards this goal. “There’s a need here to have more Black students, postdocs and faculty consider U of T Engineering as a space to study and work,” said Burke.

“It’s hard to get them to consider U of T if we’re not in the room. It’s important for U of T to be intentional in terms of how we build relationships, and it’s important to be present for the discussions that need to be had.”

Burke says that by the end of the conference, there were American students who were interested in applying to U of T Engineering, who hadn’t previously considered it before. “It was nice to be able to be in a space where it’s primarily Black students who are involved in engineering, some of whom are interested in graduate school and be able to reach out to them and build that notion of U of T in their mind,” said Burke.

Furthering that notion was when NSBE U of T Chapter members got to accept Chapter of the Month for September honours at the conference. Joining them on stage was Arnold, who is now actively involved in NSBE U of T.

“Since the conference, I’m now mentoring two engineering students,” said Arnold. “I hope more graduate students join me in taking part in NSBE U of T and in building those connections with the Black engineering community.”

This story originally posted on U of T Engineering News.