A hearty “Yah!” accompanied by a fist-pump of victory, is what Olugbenga Olubanjo (CivE MASc Candidate) remembers best about Victoria Day.

While the rest of the country was enjoying an extra day off as part of the holiday long weekend, Olubanjo heard of his startup’s latest prize – an award of US$10,000 as a runner-up in the Cisco Global Problem Solver Challenge. This is the third award the startup has received in 2019, as well as a provisional patent.

Olubanjo and his team at Reeddi Inc (pronounced “ready”) want to bring clean, affordable and portable power to the people of Nigeria, giving them autonomy over their otherwise expensive and unpredictable energy grid.

Many new inventions are conceived in the pursuit of solving a problem. In this case, the seed was sown in 2017 while in Toronto and the frustration of often being suddenly disconnected while talking to friends or family back home by phone. He would later usually find out the disconnection was the result of an all-too-frequent power outage.

Olubanjo recalls being “at Massey College at night with light everywhere,” and couldn’t imagine returning home where it was like “going back to darkness.” Growing up in Nigeria with sometimes only two hours of electricity a day, he set out to find a solution to a daily problem faced by many back home. The MASc student’s very personal irritant was the spark, which lead to a solution for a much broader issue.

The statistics are staggering. Some 600 million Africans live without access to electricity, with 70 million Nigerians among them. Alternatives for household lighting, cooking and other needs can be dangerous and expensive. Kerosene lanterns used inside create health risks, as well as the need to travel great distances to obtain costly fuel.

Vast amounts are spent on creating electricity from polluting sources, further adding to the poor air quality in Nigeria. The patchwork energy system is simply unreliable and dirty; a better way to serve the multitudes is still desperately needed. Olubanjo had a “lot of sleepless nights.” And added what “kept me going was the possibility of having an impact on millions of lives.”

Armed with the idea to create a solar “umbrella” capable of charging mobile phones, discussion with friends and engineering colleagues led to developing something of a somewhat larger scale. The road to this point began with friends and colleagues, but also with assistance from the U of T’s Hatchery NEST. Some 3D printing, acute business questions and collaboration has driven the idea along while Olubanjo completes his graduate studies in civil engineering.

Olubanjo is clear he’s had a lot of help. Ideas, prompts, expertise and questions from friends, colleagues and faculty led to the development of the project so far. Prof. Yu-Ling Cheng (ChemE, CGEN) acted as advisor and mentor along with Bill Nussey (CEO of Solar Inventions); Prof. Ireh Iyioha, Founder of PEIFFUND; Omozaphue Akalumhe, Director Prividia Energy UK; M.K Balaji of Delloite, and Okide Ezigbo of Ontario Power Generation. The team at Reeddi includes U of T’s Osarieme Osakue (CivE MEng Candidate) as Director of Communications and Joshua Dzakah (MechE 1T9) at the post of Mechanical Engineer, along with Olamide Oladeji as Director of Strategy & Analytics, Olatunji Oladipo and Azeez Oluwafemi.

So how will Reeddi make an impact? With the current project proposal, a large standalone, solar-powered structure, about half the size of a bus shelter, would have interactive screens at eye-level that control the user experience and provide access to the removable Reeddi Capsules. Each watertight Reeddi Capsule, about the size of a long 12-pack of soft drinks, is comprised of an internal rechargeable lithium-ion battery (LIB) with external USB and AC plug.

Customers would pay a nominal rent of up to US$0.50 per 24 hours for a 250 watt-hour (Wh) capsule. A standard 250Wh capsule is enough to provide a combined seven hours of lighting via two 150 lumen LED bulbs, fully-charge three mobile phones (3W) and provide four hours of laptop power (30W). Capsules can also be connected and scaled up in a modular fashion; doubled-up it would create a 500Wh unit, and so on, for greater power needs such as appliances. 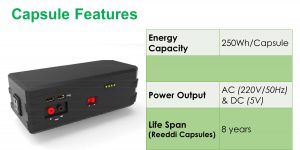 Reeddi Capsule features include 250Wh/Capsule, power output of 220V/50HZ AC and 5V DC. Each capsule has an expected lifespan of eight years.

The capsule(s) can be returned within the rental period, or when depleted before the return period. As an incentive, when a return is made on time the customer is awarded points to be used towards future exchanges .

“The impact it can bring really drives me and makes me excited,” said Olu. The very clean, affordable and dependable power would give households stability of their power needs, as well as provide scalable options.

As proof of concept, Reeddi created a mock-up prototype of one capsule in December 2018, then created a working prototype for a capsule as a contest entry. They are on track to running a micro-scaled pilot with five Interactive working Reeddi Capsules prototypes by August 2019 in Nigeria.

Some investments will be required in running a pilot test for the innovation making it possible to deploy working capsules to the field. A long-term plan for Reeddi would see the project expanded for medium power uses as a dispatchable power source for e-scooters, electric motorcycles and tricycles and large power uses (full home needs).

The idea has potential for use in Canada, and North America, as well. Whether for hikers taking trips to remote sites, or where disaster has disrupted power grid. Anywhere there’s a need for getting clean and affordable power into the hands of the people is a potential market.

Since January 2019, Reeddi has been internationally recognized for its innovative technology and business model. In February 2019, it won the North American Regional Award for the Best Emerging Startups in Decentralised Energy Track at the IEEE Empower a Billion Lives Challenge held at Georgia Tech, and in April, Reeddi Inc was won the MIT 2019 Clean Energy Prize (National Grid Energy Delivery Track).

Olugbenga Olubanjo (Olu), the founder of Reeddi started the company when he arrived in Toronto. Prior to starting Reeddi Inc., Olu was a Winner of the 2017 University of Toronto Hult Prize Competition representing UofT at the Regional Finals  . He was also awarded the RBC Prize for Innovation and Entrepreneurship (People’s Choice Award) for VECO, the company that transitioned into Reeddi Inc. Olu is also a Junior Fellow at Massey College. His MASc thesis, Embodied Emissions in Rail Infrastructure: A Critical Study, is supervised by Professor Shoshanna Saxe. He expects to graduate the fall of 2019.