Imperial Oil sent two University of Toronto alumnae to host an information session on campus. We sat down for a chat with Karsmina Kam (Min 0T8), Mine Performance Team Lead and Joyee Pu (Min 1T4 + PEY), Senior Operations Analyst, who are both originally from the Toronto area and now reside in Calgary. The pair were at the St George Campus to host a meet and greet with engineering students on behalf of Imperial Oil/Kearl Oilsands. The company is looking for co-op and full-time employees from within the undergraduate and graduate students. 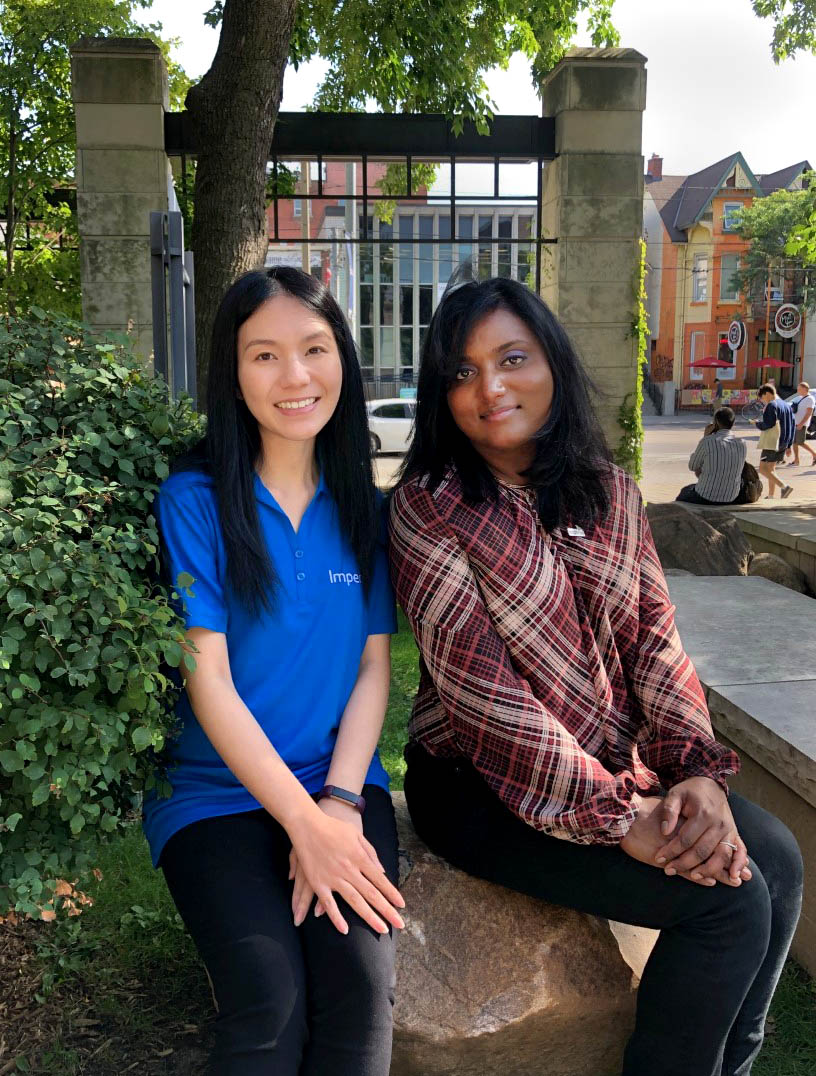 VISITING ALUMNAE (ALUMNI) — Joyee Pu (Min 1T4 + PEY), Senior Operations Anyalyst at Imperial Oil (blue shirt) and Karsmina Kam (Min 0T8), Miner Performance Team Lead at Imperial Oil (in pattern shirt) at the University of Toronto campus on Thursday, September 12, 2019. The duo visited the St George Campus to provide a meet and greet with students on behalf of Imperial Oil/Kearl Oilsands. The company is looking for co-op and full-time employees from within the undergraduate and graduate engineers.
PHOTO: Phill Snel, Department of Civil & Mineral Engineering/ U of T

So, you’re here at U of T looking to recruit students for the summer, or for short-term jobs, and also full time. All of the above?

Joyee  Yes, we’re looking for both co-op students and full time. We have positions that vary from four months to 16 months for the co-op students, and we’re also looking to hire new grads who want to join us after they graduate from university. For the co-op positions you can be an undergrad student, or a graduate student doing your masters.

For an undergraduate it’s a good opportunity for a PEY (Professional Experience Year), perhaps?

Joyee  Oh, yeah, for sure. I did a PEY with Imperial Oil. I loved it so much that I decided to go back as a full time new grad with Imperial Oil in July 2014 and moved to Calgary. My family is originally based in Ontario – Toronto.

Karsmina  I didn’t part take in PEY, however back in 2004 there was a collaboration between civil companies and the university. If you were selected you can do four month work terms during the summer with different companies. I worked for Lafarge and City of Mississauga for my work terms. On my last year a lot of mining companies were hosting information sessions and doing on site interviews.  I got hired as a full time through this recruitment process.

So you’ve both been in Calgary ever since?

Karsmina  No, I went to Fort McMurray first. I worked for a different company, Suncor in 2008, and then moved to Calgary with Imperial Oil in 2018.

Karsmina, did your experience and the education here at U of T provide the background you needed to obtain your current position?

Karsmina  Yes, University of Toronto graduates are sought after by employers. We were offered networking sessions with future employers at a very early stage. They offered the visibility, as well as a curriculum that meet the expertise  employers were looking for. The adjunct professors brought a good balance between practice and theory. The largest part of my education, that I use to this day, is what we learned in mineral economics. Understanding the financial analysis has helped me provide direction on business cases for my current employer.

Joyee  The professors helped a great deal. In second year, I expressed my interest in gaining work experiences in the mining industry with Professor John Hadjigeorgiou and he was willing to give me an opportunity. He took me in as his research student for one summer and we worked on a pit wall stability project together. The experiences opened up many door for me in future years. Having that kind of relationship with the professor was great. Aside from the strong bond with professors, the education program at U of T also taught me how to think critically and work independently, which are critical skill sets required at work.

Would you change anything about how you approached school, or what you did here? Would you have done something differently knowing what you know now about the industry?

Joyee  Networking! I definitely encourage all the students to take advantage of the networking events (such as the one we are offering today) offered on campus to meet with others and get to know the industry a little bit earlier. It helps you build a relationship within the industry and get your foot in early.

Isn’t that ironic? Now you are holding the same type of events in order to attract students like your former self?

Karsmina  I totally agree. I think being more involved is crucial. Assignments, midterms, and labs can keep you terribly busy. You may not always step out to be more involved in those extracurricular activities and networking – networking is big. I did go to CIM [Canadian Institute of Mining] lunches and other similar kind of events. They proved to be very beneficial. Through one of these events I had the opportunity to work at PDAC for two years.  Like a lot of things, it was advertised through the Student Services office and that’s how we knew where to go participate and network.

What about in terms of lifestyle? Would you have any advice for future students, or those who are currently starting their first year, what they should do to prepare themselves for the next four or five years, or if they should do a PEY?

Joyee  Extra curriculum would be great. Try to get involved in a variety of different organizations and try to take some lead positions in there, because it really gets you to start thinking like a leader early on.

Karsmina   Don’t give up on mining in your first two years. I know mining may not have been a lot of people’s first choice, but it is a very dynamic and interesting industry to be in.  The challenges and opportunities in mining are significant. Remember, if it’s not grown, it’s mined. Lastly, build relationships and good teamwork skills. The projects in the industries are complicated. Working cross functionally and with all sort of different personalities is important. Use the opportunities in completing group projects to practice these skills.

You’re probably on the cutting edge of helping to equalize some of the playing field in terms of gender diversity. You’ve probably experienced some hard knocks, or pushback, and so would you have any advice for women? Is there any advice you have for women who want to excel in the industry?

Joyee  For me, I was expecting to receive some pushback in the mining industry entering the work force as a petite girl, but my experiences on site really struck me. The operators I dealt with on site were mostly male and twice my size which I refer to as gentle giants. They have the warmest hearts and took me in as a family member where I learned tons about designing practical engineering solutions.  I felt very welcomed entering into the workforce and dealing with them.

Karsmina  For me, I would say Imperial is definitely very inclusive, very diverse, and is a leader in treating people equally. I wouldn’t say that all of my experiences were like that. Mining is definitely male dominated, so you do run into some road blocks. It is important to be firm and affirmative. Being confident when you bring ideas to the table will help you drive the messages across.

Is there anything else you can think of? Something practical about being in this building or on campus? Or what’s a local a local restaurant you “must” go to?

Karsmina  I love the [Lassonde] Mining Building. I spent a lot of time in the mining lounge and meeting other mining engineering students, especially the third and fourth years. They really make you feel like you’re at home. The senior year students are very helpful in giving you career advice, homework help, and even exam prep. For food choices: New Gen Sushi at Spadina and Bloor.

So you miss New Gen the most?

Karsmina  I miss how everything is so close. Like Harbord Street is right there with all the food selections.  Baldwin Street as well. For foodies it’s great and it’s cheap. Yesterday we went for ramen and [Joyee] was joking how both of our bills combined is going to be under 50 bucks. That’s not something you see outside of probably campus life. Another thing I miss are the hot dog vendors. They are not a common sight in Alberta. There used to be a guy across the street from the Mining Building. When we pulled all-nighters for assignments or exams, you can count on him to be out there with a heater going.  I don’t even know if he’s still there, but it’s one of the fond memories I have.

Joyee  The location of the campus, the people, the culture, the food and much more. The campus is right downtown with everything you could possibly want at your door step. The [St. George] campus houses some of the most exquisite architecture, surrounded by lush foliage and greenery, which made me fall in love with U of T at first sight.

This article has been edited for clarity.