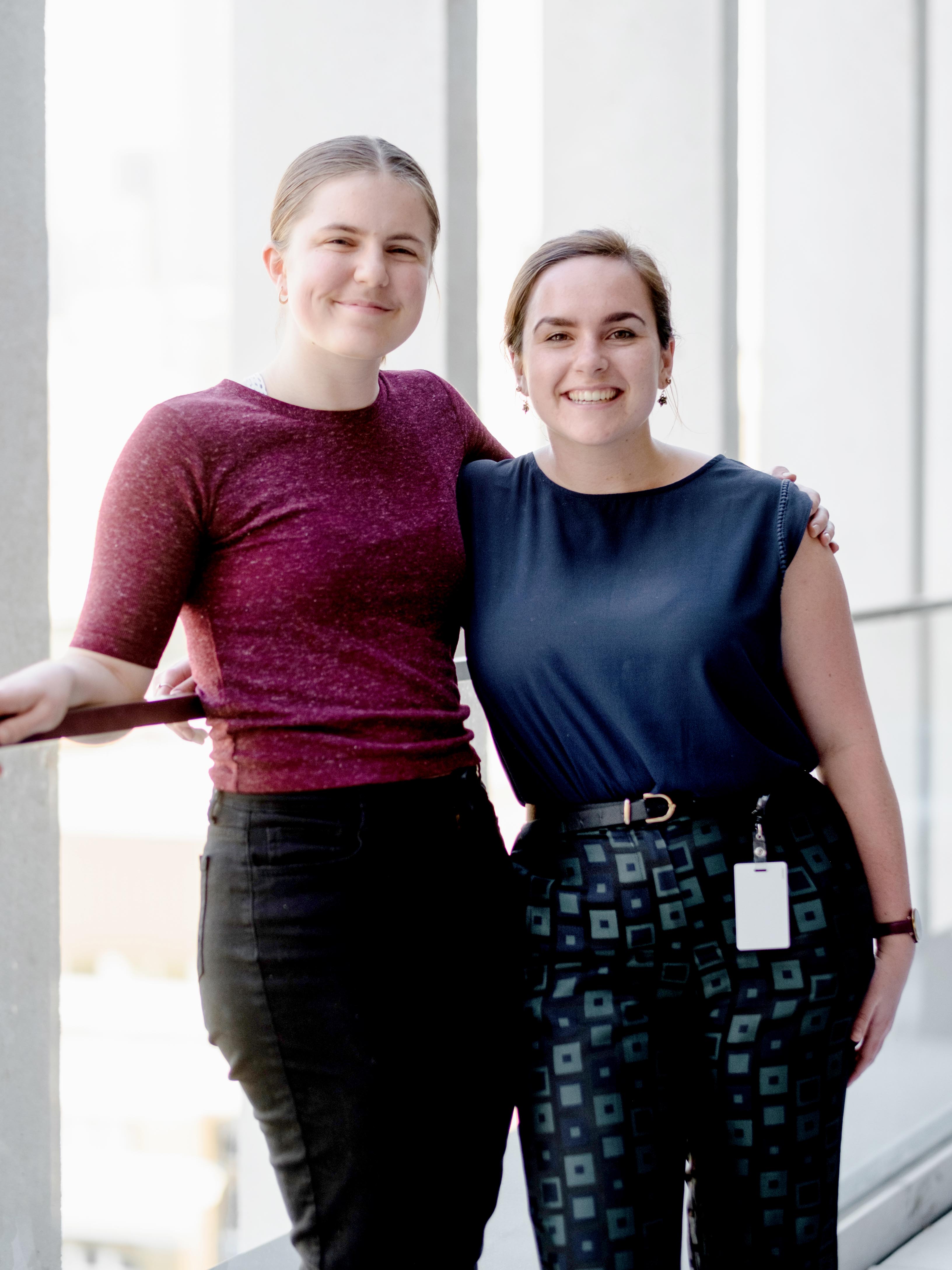 ENGINEERS WITHOUT BORDERS – U of T Chapter co-Presidents: Jacqueline Fleisig and Molly McGrail.

Please tell us a little bit about yourselves.

Molly  I’m in Engineering Science and on PEY right now, so between third and fourth year (2T0 + PEY), and I’m in the infrastructure option.

Jacqueline  I am also an EngSci with biomed option in third year, and I just got a PEY position a few weeks ago, so I will be 2T1 + PEY.

What would you like people to know about what your group does?

Jacqueline  Our mission is to address the root causes of poverty and inequality by bringing people and ideas together. So that’s sort of the overall view of what EWB does. But I think what that means to us, here at the U of T Chapter, is growing and investing in a community of people who are really passionate about creating social change in Toronto and in the world around us.

One of the things that I’ve heard from a lot of people, not only at the U of T EWB chapter, but also at other chapters across Canada, is that people come to EWB because of idea like creating social change, and learning about different issues. But a lot of times they stay for the community, because I think that’s something that we’re also very good at, building a strong community within EWB. What that looks like in terms of what we do is we have like a lot of learning opportunities and we also have projects and advocacy that we do in Toronto.

What are you working on right now, as a group?

Jacqueline  There’s a lot of things we’re working on right now, because we’re a pretty big club. One thing that’s coming up for us is we’re organizing a summit called the Student Leaders Summit. It is a collaboration between our chapter as well as the Queen’s and Carleton chapters. It’s going to be a three-day retreat for students who are interested in EWB and who are involved in EWB – we’re really excited about that. It’s going to be a great opportunity to learn and connect with different people, as well as hear from some speakers. In terms of our portfolios. there’s a lot happening right now – for example, our youth engagement portfolio is organizing a few different outreach programs for high school students. They have one called a Innomasters where they teach students about design thinking and then how that can apply to social change. And then they have another one that they started called EWBeyond, which is going to be helping students develop their own initiatives in their high schools. We have a local poverty alleviation group, and they’re working on a project to increase transit access. They’re also working on a permanent address project. So, basically, seeing whether they can provide some sort of way for people who are homeless, who don’t necessarily have a permanent address, to have a mailing address regardless of where they are. It’s really important for applying to jobs and even having a bank account.

That’s only a small portion of what we have going on right now. I think one of the cool things is, because we’re so big, there’s something for everyone. Within the club, if people have different interests they can probably find something related. We can also support creating new projects within the club.

It sounds like there’s something for everybody. So let me back up a little bit. How did you to get involved in this club? This is not your first kick at the can. So how did you guys start it?

Molly  I got involved in my first year. The Faculty of Engineering’s First Year Office has a great tradition of sponsoring 10 first years to attend EWB’s annual national conference. So in my first year it was in Edmonton. The first year office paid for my conference ticket and everything for me to attend this conference. I wasn’t a part of the club before then, but had heard about it in Frosh Week, and it sounded really cool, but I was afraid of committing to anything at the time.

I went to the conference in Edmonton and met a bunch of people and executives that got me really excited about the club and, just in general, about making life better for people. I came back from the conference all jazzed up and ready to go. Then in second year, I got involved in a higher commitment role in their youth engagement portfolio, and I was involved in creating content, creating workshops for high school students. And then last year, I took on an executive position so in that kind of content and learning space. But really, it’s the people that got me involved. And I don’t think there’s ever been a role that I’ve taken on without someone else kind of encouraging me to do that and kind of hyping you up and bringing you in kind of thing. 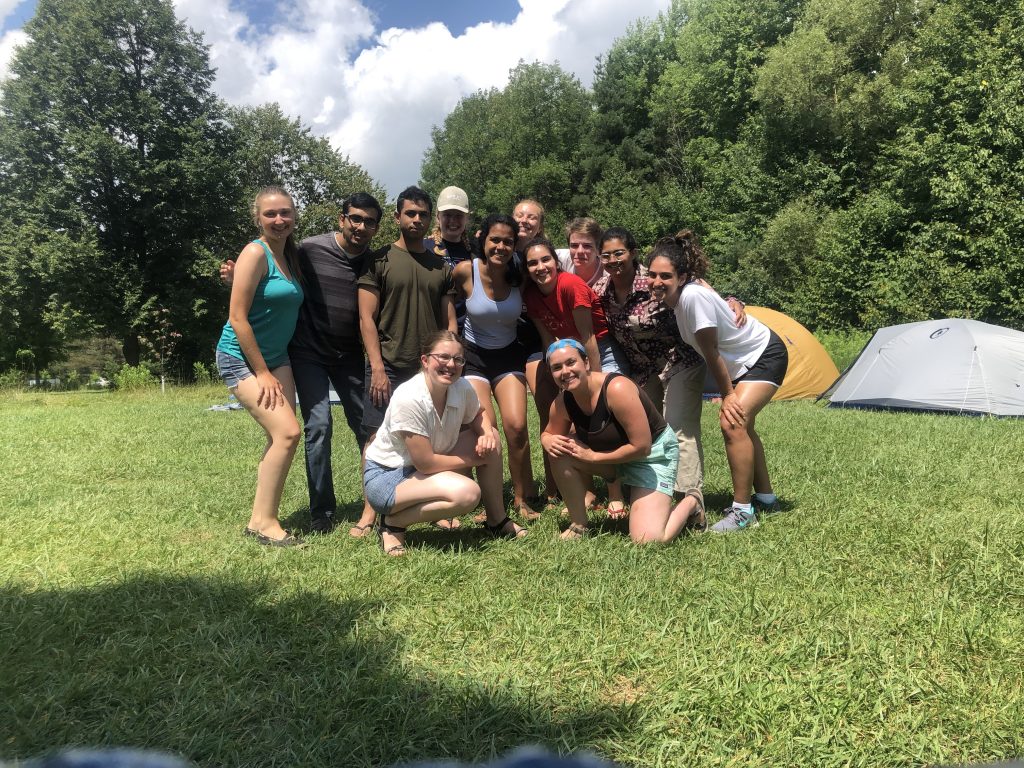 ENGINEERS WITHOUT BORDERS – U of T :
the group of EWBers who attended our Chapter Retreat this past summer at Guelph Lake. From left to right on top you have Stephanie Marton, Chaitanya Ahuja, Shafkat Choudry, Lauren Streitmatter, Tamara Mahbubani, Kelsey Rombouts, Sabrina Cupryk, Luke Cowan, Neha Mahmood, Shireen Arganadeh, and in the front there is Jacqueline Fleisig and Molly McGrail.

As a first year student you attended the EWB conference in Edmonton. Did it spark the fire within to continue working with EWB?

Jacqueline  I got involved in first year in one of the community projects we had. We were working with a group that ran drop-in programs for youth in Regent Park, and helped them with some curriculum development for a STEM program they wanted to start. That’s how I got involved in first year. I don’t think there’s a role I’ve taken on where I haven’t been encouraged by someone.

Last year’s president was encouraging and said, “You should consider applying for an executive role.” So I did, and I took on the role of global engineering lead last year.

I think the more I got involved, the more I wanted to be involved. Then Molly nominated me – she was looking at becoming president and she asked me to think about doing it with her. I decided to, and it was probably the best decision I’ve ever made.

Does EWB have a history of having sort of co-leaders or co-presidents?

Jacqueline  Yes, most years it’s co-presidents and most of our executives have co-leads. I think it enables you to do a little bit more and be involved in more places. And for me, at least personally, it’s always helpful to have that sounding board.

If somebody wants to get involved, how would they go about as a regular day and time and place or?

Jacqueline  We have weekly community learning sessions, which are usually our big weekly events. We also have monthly workspaces, and those are where all our portfolios come together and have an opportunity to work on whatever it is they’re doing in the same room and sort of talk to each other and hear about what other people up to. Other than that, I think if you go look on our website, there’s a signup form and then we can send more information based on what portfolio you’re most interested in getting involved with. Most of them will meet on different days, but they’re generally quite open to new members throughout the year.

Molly  I would add that if anyone doesn’t know for sure they want to commit to anything, but they just want to stay current on what’s going on, they can follow us on Instagram, or Facebook, or sign up for our newsletter, via our website.  We have a weekly newsletter, and our social media is quite active, so it’s easy to know what we’re up to.

You two got involved in first year. Would you welcome students of any years, even if they’ve never come forward before?

Jacqueline  Absolutely. Molly’s co-lead last year was someone who hadn’t been involved at all in EWB. Then in fourth year he decided to get involved, became part of the exec team, and did an amazing, amazing job. You can get involved no matter what year you’re in – I think there’s lots of opportunities within the club.

There’s various levels of commitment, right? You could just be lightly committed or more?

Jacqueline  If you choose to, you can just attend some portfolio meetings. As a general member, you can choose to come out to the events that we host. Or, if you want, you can take on a bit higher of a commitment role, like a leadership position.

Molly  And, to plug further about the student leaders summit, it’s going to be in Muskoka at a camp and we’re hopefully going to have enough space to take on people who have not been part of the club before. It’s going to be a really affordable way for people to really get engaged with the club for a weekend. Again, we are sending 10 first years for free, so another good chance.

How did they select people?

Jacqueline  It’s actually up to us to select people – we have a short scholarship application. It’s just a few questions basically to see if you’re interested, why you’re interested, what do you think you’re going to bring back as an experience to others around you as well.

Well, 10 first years get a great trip and experience. Awesome.

Is there anything else about you two, personally, that made you sort of a natural fit for this role? It seems like you like people and you engage very well with others. Is that it?

Jacqueline  Yes, I think engaging with people definitely can be key. I think another thing I found very useful in school is being able to think about what you’re doing very critically. As well, being able to examine a situation and say, “What can you do to make things better?”

I think one of the really cool things about EWB is, no matter what position you’re in within the club, you do have a lot of freedom to bring forward your own ideas, and what you’re interested in or passionate about. So taking the time to understand that and use an amazing opportunity within EWB is something I think has been very valuable.

The Student Leaders’ Summit: Systems Change is no Walk in the Park is January 17-19, 2020 (registration is closed)