CivMin PhD Candidate Pedram Mortazavi was one of just five recipients from more than 550 nominated teaching assistants from across the University of Toronto. (Photo: Keenan Dixon)

Mortazavi, a PhD candidate in the Department of Civil & Mineral Engineering, is one of just five recipients from more than 550 nominated teaching assistants (TAs) across the entire University. He has taught Steel and Timber Design and, Principals of Earthquake Engineering and Seismic Design.

“It may sound cliché, but I love teaching,” said Mortazavi. “TAs are a significant part of the student learning experience. I believe that the effect that instructors and TAs have on students goes far beyond the classroom. Beyond teaching the material, TAs play an important part as role models.”

Mortazavi was nominated by several students of Steel and Timber Design, of which he was the Head TA. Even after his courses were over, he found himself answering student requests for career and other advice.

“He learned all of our names and truly made himself available to students whenever they had a question,” said Chris Rotella (CivE Year 3), one of the students to nominate Mortazavi. “He was very invested in the success of the students and even when an email came in at 9 p.m., he was happy to answer and help us.” 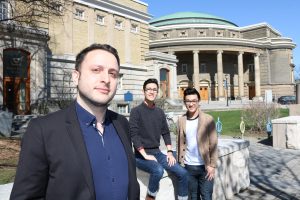 “He checked in to make sure we all had the information we needed in order to complete our projects,” continued Andrew Lau (CivE Year 3), another nominator. “When we couldn’t figure out part of our model, rather than just provide the solution, he went back to the foundations of CIV100 to explain how to fix the problem.”

Mortazavi credits this recognition and his success in teaching the course to its professor, Constantin Christopoulos (CivMin).

“Professor Christopoulos allowed me to contribute in a significant and meaningful way,” explains Mortazavi. “I was able to plan and run the tutorials, lecturing the class from time to time and also defining the scope for the term project. It was because of these things that I felt that much more invested in the students and the course.”

“He was constantly thinking of progressive methods and clear ways to teach the course material,” said Christopoulos. “He devised a teaching apparatus that replicates the physical behaviour of structural engineering components, which is often difficult to visualize.”

Mortazavi valued and implemented the feedback that he received from both Christopoulos and students.

“He proactively asked for advice and feedback about useful and effective teaching methods,” said Christopoulos. “As a result, Pedram has developed excellent skills for encouraging students to participate in classes and tutorials.”

Mortazavi is co-supervised by Professors Christopoulos and Oh-Sung Kwon (CivMin). His research — focused on the performance and experimental validation of cast steel link elements in eccentric braced frames — explores the idea that during an earthquake there is an element of a building that is engineered to absorb seismic energy and ensure that the remainder of the structure is undamaged, thus ensuring the safety of building occupants and first responders.

Mortazavi’s research sees him working with U of T startup CastConnex and, alumni Michael Gray (CivE PhD 1T1) and Carlos de Oliveira (CivE MASc 0T6). He is also the President of the Earthquake Engineering Research Institute Chapter at the University of Toronto.

Mortazavi is the first Civil Engineering student to received the TATP Teaching Excellence Award since it was created in 2003. The award seeks to value the work of TAs who regularly inspire and challenge undergraduate students. The awards committee considers the TA’s knowledge of his or her subject area, communication skills, organizational skills, demonstrated enthusiasm, and ability to provide students with effective feedback, as well as testimonials from both students and faculty supervisors.