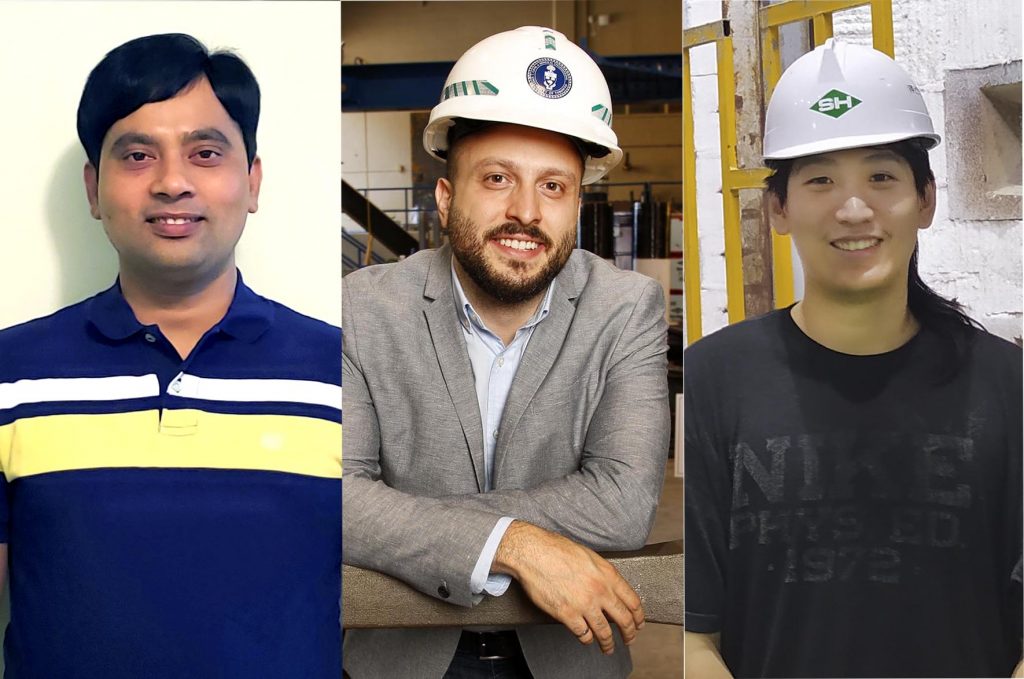 Three PhD candidates from the Department of Civil & Mineral Engineering (CivMin) at the University of Toronto have won honours for their video thesis entries in an international competition.

Moniruzzaman Moni, Pedram Mortazavi and Xuguang Wang, all civil engineering PhD candidates, won three out of the 10 honours awarded for the “3-minute Thesis” video competition held by Multihazard Engineering Collaboratory on Hybrid Simulation (MECHS). MECHS, funded by the National Science Foundation in the U.S., made the announcement with a full list of categories and winning videos online.

All three U of T winners have Professor Oh-Sung Kwon as a supervisor, with Mortazavi having co-supervisors Professors Constantin Christopoulos and Kwon. One of the main research interests of Professor Kwon’s research group is on the development and application of hybrid simulation methods where diverse experimental specimens and numerical models are integrated to accurately simulate responses of structures subjected to extreme loads. As part of the research program, the research group has developed the UT-SIM (Simulations for Structural Resilience​) framework through which various numerical and/or experimental tools can be seamlessly integrated.

In the early development, the main focus of the framework was to simulate structures subjected to earthquake excitation. In the past five years Prof. Kwon’s research group has expanded the framework such that structures subjected to fire or wind loads can be simulated. Some of the work is performed within the Department’s large indoor Structures Lab, which enables full-scale testing of building components.

CivE PhD candidate Moniruzzaman Moni‘s entry, titled “Real-time aeroelastic hybrid simulation of a base pivoting model building in a wind tunnel,” was selected from a large pool of entries as a winner in the “Creativity” category.

CivE PhD candidate Pedram Mortazavi‘s entry, titled “Four-Element Hybrid Simulations on a Steel Structure with Cast Steel Yielding Connectors,” was selected as a winner in the “Novelty” category. Mortazavi’s work is in collaboration with Cast Connex.

CivE PhD candidate Xuguang Wang‘s entry, titled “Development and Applications of Hybrid Simulation Method for Fire Testing, was selected as a winner in the “Technical” category.

While having three out of 10 winners of the competition from Professor Kwon’s group is impressive, he also had a hand a fourth winner’s work. A winner from Seoul National University in Korea is co-supervised by Prof. Kwon for his work on aeroelastic hybrid simulation of a bridge deck.