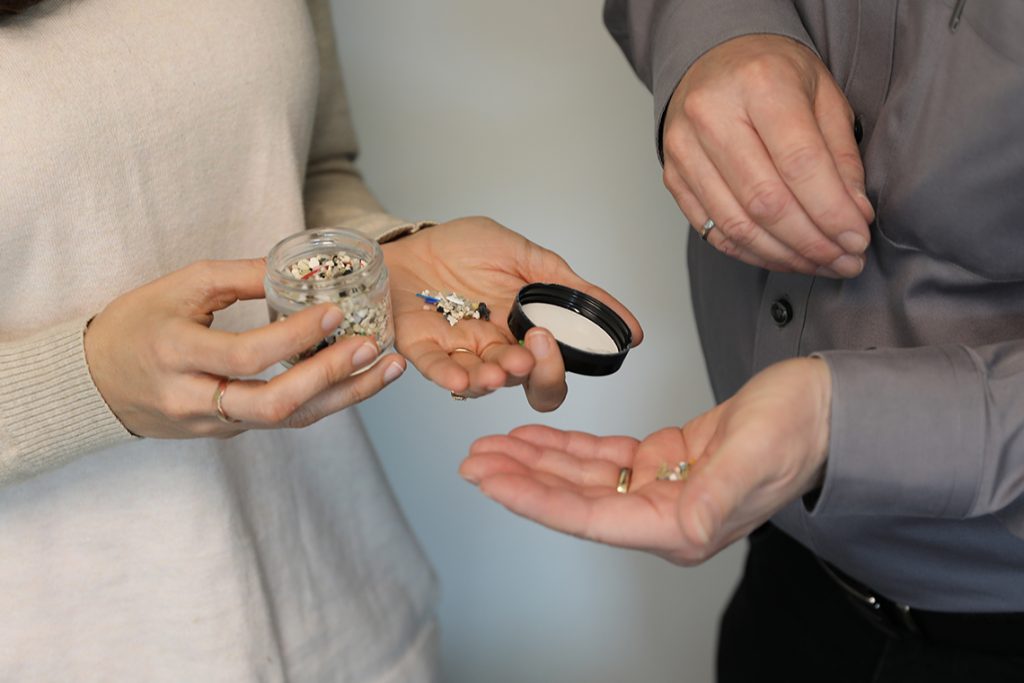 Is there plastic in your drinking water? The University of Toronto’s Bob Andrews and Chelsea Rochman say there is – but, unfortunately, they don’t have much more information to share.

“If someone asks me how microplastics in drinking water influence human health, I have to say that we have no idea,” says Rochman, an assistant professor in the department of ecology and evolutionary biology in U of T’s Faculty of Arts & Science.

“But we should be concerned that the mismanagement of our waste has come back to haunt us.”

Plastic never really goes away. While some waste plastic is recycled or incinerated, most ends up in landfills or worse. A world-leading expert on the fate of plastic waste, Rochman has documented how it ends up in oceans, lakes, rivers, as well as along their shores and even in the bodies of aquatic animals.

“All of the big stuff that you see eventually gets broken down by sunlight into smaller and smaller pieces,” she says.

When plastic pieces become small enough that a microscope is required to see them – anywhere from a few millimetres down to a few micrometres – they are referred to as microplastics. As with larger plastic pieces, microplastics are found widely in the environment. Rochman and her team have even extracted them from the bodies of fish for sale in a commercial market.

Concern over microplastics has been floating just below the surface for some time, but it wasn’t until the fall of 2017 that the issue of microplastics in drinking water hit headlines in a big way.

A non-profit group called Orb Media took samples of tap water from around the world, found microplastics in most of their samples, and released their results to the media. As a member of both the Drinking Water Research Group and the Institute for Water Innovation, Andrews, a professor in U of T’s department of civil and mineral engineering in U of T’s Faculty of Applied Science & Engineering, knew that his collaborators would be curious about the story.

“Within hours, I got calls from a couple of the major water providers in southern Ontario that I work with, asking me what we were doing on this topic,” Andrews says. 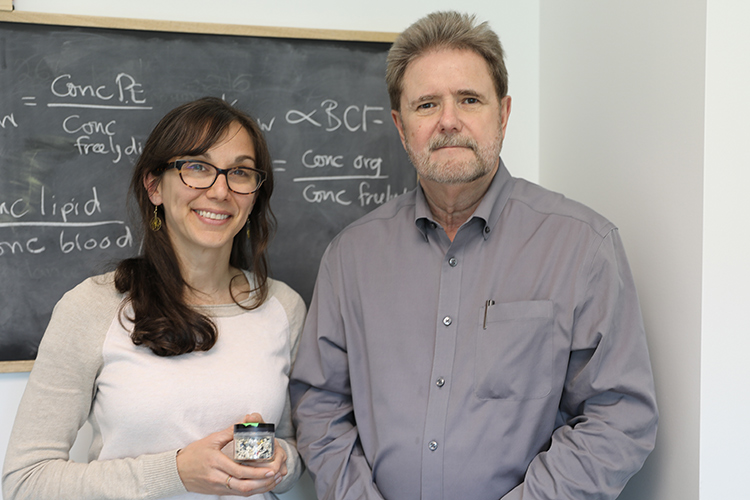 Yet, despite his experience collaborating with drinking water providers on treatment and technology, Andrews had not researched the issue of microplastics before. So he sought advice from Rochman.

She was skeptical at first.

“I said, ‘I don’t think they’re going to be there, but sure, let’s filter some water and have a look,’” says Rochman. “We did, and they were there.”

The traditional approach to dealing with drinking water contaminants, such as heavy metals or organic compounds, is for scientists to determine a target threshold below which the risk to human health is considered minimal. Drinking water authorities then invest in treatment technologies designed to keep the levels of these contaminants below the threshold.

But there is no existing threshold for microplastics, and developing one will be complex for several reasons.

First, plastic interacts differently with the body depending on how big the pieces are. “What we’ve seen in animals is that larger pieces usually just get excreted,” says Rochman. “But the smaller particles can actually leave the gut and go into tissues, which is when you can get inflammation and other problems.”

Another challenge: There are no standardized methods for testing levels of microplastics in drinking water. Different teams employing different techniques could obtain different results, making it hard to compare scientific studies with one another.

Contamination is also an issue since tiny plastic particles shed from clothes, carpets and upholstery can get into the samples and skew the results.

These challenges are further compounded by the fact that microplastics can break down into even smaller particles known as nanoplastics. Nanoplastics may behave differently from microplastics, but information is scarce because methods for detecting them haven’t been invented yet.

“Right now, we don’t have good techniques for handling nanoplastic particles,” says Andrews. “One strategy we’re considering is to concentrate them, burn them, and analyze the gas to determine what types of plastic are there. We’d then have to back-calculate to determine their initial concentrations.”

Andrews and his team also have experience testing the toxicity of various compounds on cells grown in the lab. While they may one day go down this route for nanoplastics, for now Andrews and Rochman emphasize the importance of improved analysis as a key step towards developing policies to address the challenge of microplastics.

“California has already passed laws mandating the monitoring of microplastics in drinking water and in the ambient environment,” Rochman says.

“I think it’s good that those bills happened because they are now forcing this global methods development program, which we’re helping lead. We don’t want to throw out numbers until we feel that we have a sound method.”

The collaboration between Rochman and Andrews is funded in part by U of T’s XSeed program, an interdivisional research-funding program designed to promote multidisciplinary research. XSeed projects include one principal investigator from U of T Engineering and one from another university division – in this case, the Faculty of Arts & Science.

“Dealing with microplastics is the kind of challenge that truly does require people from different disciplines to work together,” says Andrews. “Neither of us could do this alone.”

Originally posted in U of T News