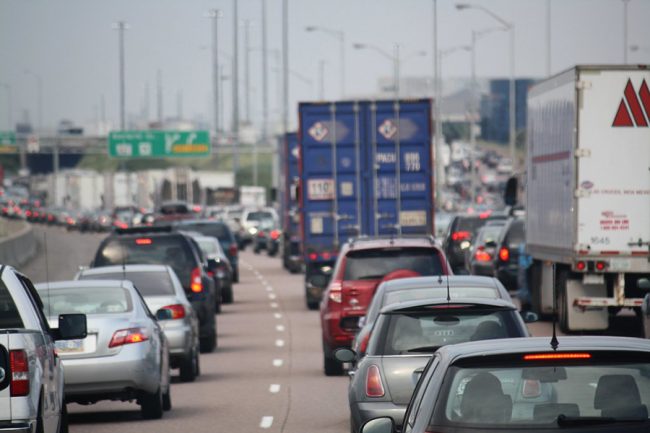 Leading experts from U of T Engineering, McMaster University and York University are working together to improve — and future-proof — how goods are delivered across the Greater Toronto Hamilton Area (GTHA) through the newly established Smart Freight Centre (SFC).

Professor Matt Roorda (CivMin), of the U of T Transportation Research Institute, is the U of T Engineering lead for the effort, and is the centre’s inaugural chair. The SFC will advance the goals outlined in the Region of Peel’s Goods Movement Strategic Plan, said Roorda in an announcement event today in Brampton, Ont.

The new centre will study ways to improve the transportation of goods throughout the region, taking into account issues like traffic, population growth and the environment.

From delivering stock to stores or packages to individual homes, the demand for freight transportation continues to rise — at the same time that expected delivery windows are narrowing.

“It’s the Amazon effect. People are buying things online and expect them delivered within a day or even within a few hours,” says Roorda. “And that has a real impact on the number of trucks on the road.”

Increased truck traffic contributes to congestion on the roads and competition for parking, both of which pose distribution challenges — especially as populations grow across the GTHA. Meanwhile, stop-and-go traffic leads to higher carbon emissions.

“We want to establish sustainable freight transportation systems that are more efficient and less impactful on communities,” says Roorda.

“There definitely seems to be a lot of spare capacity on our roadways at different times of day, so why not make better use of our current infrastructure?” says Roorda. “With there being less traffic congestion on the road during that time period, what we hope to see by studying the before and after, is that operations are running faster and more smoothly.”

His research group will also look at how the time shift will affect emission levels, examine cost mitigation for companies, and consider whether late-evening noise levels is an issue for residents along freight delivery routes.

The pilot is one of three initial projects underway in the SFC, with each of the three partner universities leading one. York University will study the feasibility of establishing truck-only lanes in the GTHA, while McMaster will research e-commerce purchasing behaviours to predict driving trends of future home-delivery demands.

Roorda and his colleagues at York and McMaster are currently developing SFC’s five-year plan, which will include research projects on automated trucks, and innovative alternatives to last-mile deliveries.

“I think we can make an impact with not just research papers in journals, but with demonstrated projects — there’s one foot in real life happening with this centre,” says Roorda. “These are on-the-ground problems that we’re trying to solve.”

Story originally appeared on U of T Engineering News