Survey Camp at Gull Lake is celebrating its centennial and getting a new bunkhouse. Nearly a century after the first group of University of Toronto Engineering students used the site, located on the north shore of Gull Lake near Minden, Ont., a modern and flexible-use building has been planned.

Purchased in 1919, the first cohort of U of T students took classes on the site in 1920, with the current 2019 class becoming the 100th consecutive year to attend Survey Camp – now known as Civil And Mineral Practicals (CAMP). Centennial celebrations included the ceremonial launch for construction of two new connected buildings, a bunkhouse and common room, on Saturday, September 7, 2019.

A distinction between the site and the course might seem superfluous, but has become the recognized norm with “Camp” being the location and “CAMP” denoting the proper name for the course of study.

Expanding numbers in a single season

Over the century, the number of attendees to the site has continued to grow, and it’s not just engineering undergrads who attend Camp for CAMP. High school students, attending the Da Vinci Engineering Enrichment Program (DEEP) Leadership Camp since 2003, have required the creative reconfiguration of the bunkhouse layout and the overall site for their different age-specific use requirements during their stay.

With uninsulated accommodations, the short summer season has led to a fairly crowded scheduling of the DEEP Leadership Camp, two separate two-week CAMP courses in August (formerly known as Survey Camp), followed by two groups that each stay for an overnight in September for the second year Introduction to Civil Engineering course.

As the number of students visiting annually has increased, so too has the representation of women in Civil and Mineral Engineering, coming in at just over 47 per cent of the current class. The current bunkhouse is one big room, designed for what used to be an all-male class of attendees. As a solution, the old Stewart Hall building layout was reconfigured to allow for separate sleeping and washroom space for women, but this arrangement is no longer meeting our needs.

Planning for a new building requires a dedicated approach, many opinions sought, several committees to meet with and hoops to jump through. “What we want is for it not to stick out (compared to the other buildings); it’s about the place, not about the building,” said Professor Brenda McCabe, who is acting as the faculty lead on the project.

Among the considerations, with feedback from students and alumni, was the new building should create continuity with existing structures, recognize the character and culture of survey camp, and maintain the existing site topography. Other considerations include the need for accessibility under the Accessibility Ontarians with Disabilities Act (AODA), giving wheelchair access to bedrooms, washrooms, and the common room.

The new project aims to extend the window for the site to be usable by the University. “We wanted three-season, and well-insulated,” said McCabe. “But still with a passive design since we want it to be as energy neutral as possible, so the design needs to be well thought through. It has to be easy to maintain.”

“From the alumni [perspective] it’s primarily to make sure it’s a sustainable building. Which means probably PV (photovoltaic),” said McCabe. “While we don’t have a budget to install a PV system right away, we have planned for it and there is a location on the roof where PV panels can be installed.”

As for the exterior cladding, “It’s a cement board, so it’s very functional, low maintenance and economical.” Suggestions for the outside colour have ranged from a similar green of the old bunkhouse, to a bright yellow, but a more neutral and soothing tone is being considered at the moment. 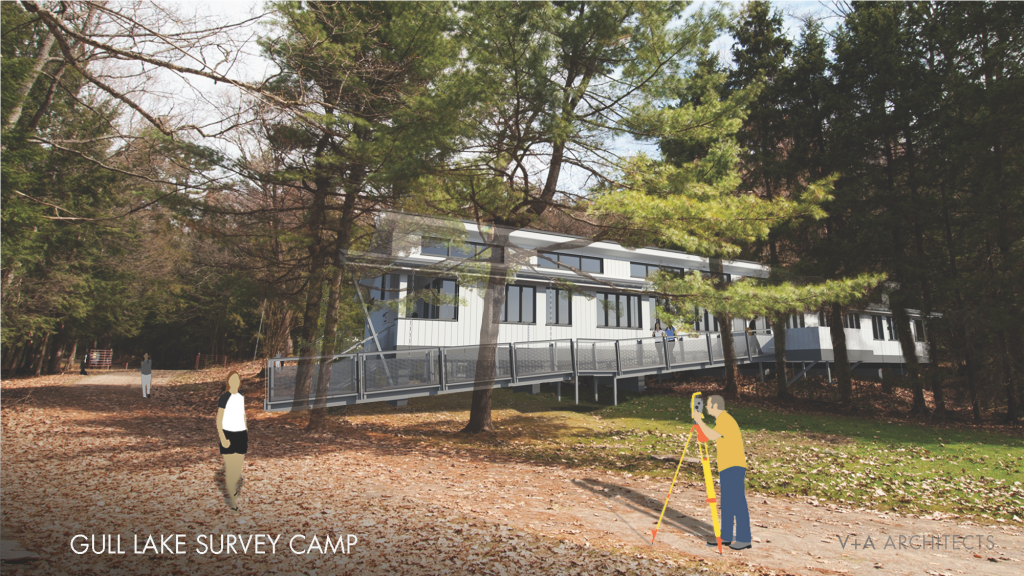 Gently sloping and staggered roof lines allow for high ceilings with windows for light and ventilation, especially helpful in the summer heat. The shape also emulates the gentle slopes of the immediate land contouring, enabling the new buildings to nestle into the existing landscape.

When asked about the design including two separate buildings, one for sleeping accommodations, and the other for a common room and washroom facilities, McCabe stated, “It was unexpected. The architect came up with it. That was their role; they certainly did things that we would not have dreamed of.”

“It was two separate buildings,” according to McCabe. “I think that was interesting for us because then we only have one “wet building” – with plumbing and running water. It makes it simpler for maintenance and cleaning – it’s all in one area, as opposed to being separate or spread out.”

The new facilities include two separate single-storey buildings connected by a gently sloped and covered walkway. The sleeping accommodations (to be known as the HCAT Bunkhouse, in appreciation of the generous support provided by the Heavy Construction Association of Toronto) will be positioned to the south and include several separated rooms along a long corridor, running east-west with south-facing windows, towards the lake. Benches will run the length of the corridor by the windows and allow for indoor socializing space. Stairs leading south, down from the sleeping accommodations, to an outside deck allow for splendid views and a social gathering space.

The new bunkhouse will not be the usual open-plan long bunkhouse of the past. It will have six individual rooms with up to eight bunkbeds each, allowing a maximum of 16 campers per room, for a maximum total potential capacity of 96 occupants.

The rooms are designed for maximum flexibility in configuration, and can be adjusted for multiple needs and uses. There is a need for flexible sleeping spaces particularly to accommodate our changing demographic of students – for example the Department had a female student population of less than five per cent in 1960, versus a nearly 50 per cent female student population today.

Students enter the HCAT Bunkhouse (named after Heavy Construction Association of Toronto) to find a large vestibule area, including two closets where coats and wet gear can be stowed (especially after long, rainy days on the highway curve), leading to the walkway headed north.

The entry with added storage was planned. “We asked specifically for this space for coats. When we’ve got especially wet weather, we need places for stuff to dry out. If it goes into the bunkhouses, it’s lying all over. There isn’t really a place to hang things up. So we asked for a place where they can put their wet things – there will be a breeze coming through, there will be a nice area there for stuff to dry out.”

In the north building, a generously-sized common room (to be called the MacGillivray Common Room in appreciation of Robert and Scott MacGillivray’s generous support) is designed for socializing, relaxing and informal gathering – along with the obligatory late nights to finish the day’s assignments. In addition to ample wall-space for student “graffiti”, there will be signage to recognize all those who attended CAMP at Dorset (Ont.).

Across the hall from the common room one finds the washroom facilities comprised of eight individual shower rooms, a single fully-accessible washroom with shower, and men’s and women’s separate large common washrooms, each with an accessible stall. 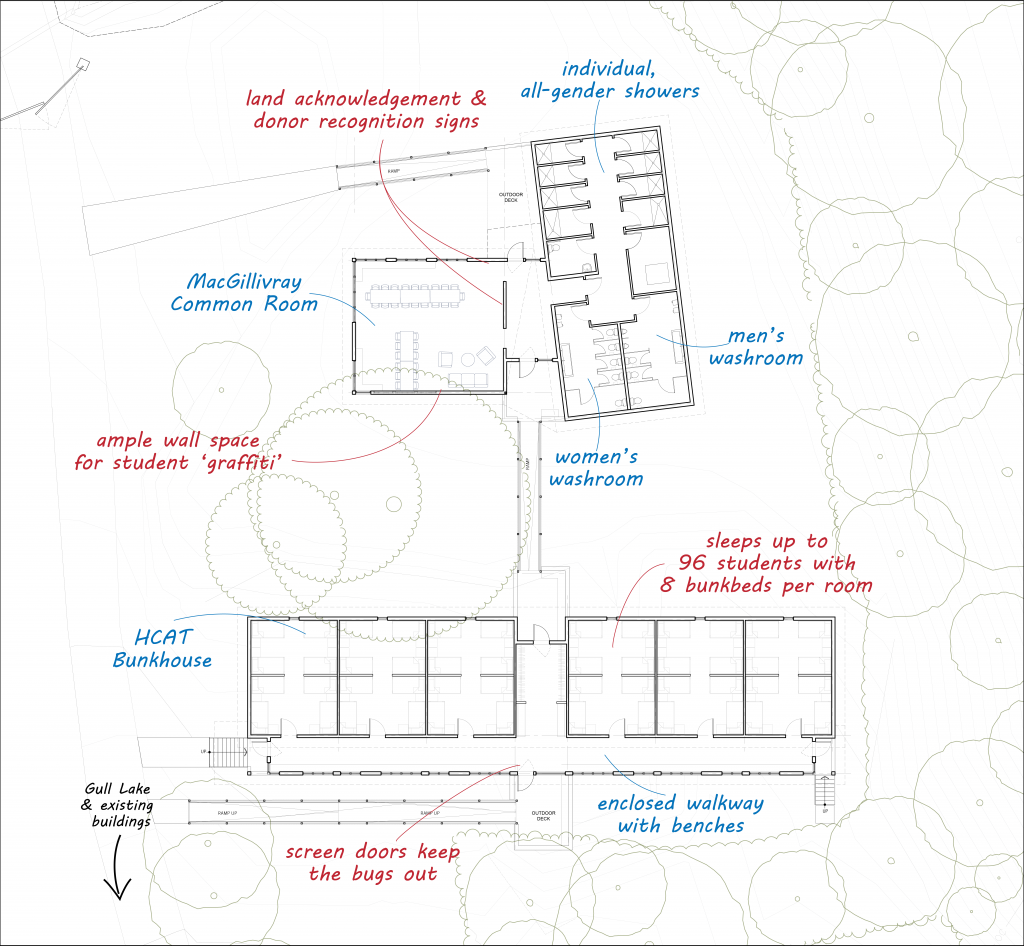 “Depending on which group is using the facility, the needs are going to change. Younger groups may use it and would they need, for example, an instructor in each of the rooms where students are sleeping? Those things are so different from our needs, that I’m not certain how that’s going to work for them, but the existing buildings work for them. I think that’s an important component. And they completely transform the way that the buildings are used when they’re there – the staff house becomes a medical centre, for example.”

Asked if there might be laundry facilities or refrigerators for snacks, the response was candid. “No laundry facilities in Camp. It’s a good reason for the students to go to town. It also requires more septic.” As for refrigeration, “No – there’s no beer fridge,” conceded McCabe. “We don’t want food or snacks in the sleeping facilities because of the chances of having critters come sniffing for a snack. But surprisingly, we don’t get that kind of complaint from the students. They’re too busy.” Otherwise, “It means they’re not working hard enough.”

What will happen with the old bunkhouse?

While the use of the space may change in time, preservation of the heritage structures and their many murals are paramount. The historic bunkhouse will remain intact, with repairs made to the foundation and roof. “One of the things we want to do, once we have the new bunkhouse working, is explore the idea of turning it into a group assembly space, so that we can have lectures, or large group meetings in there. The classrooms are too small to hold the whole group at once.”

Leave your own mark on Camp:

The ongoing Centennial Campaign for Camp offers alumni an opportunity to once again ‘leave their mark’ on camp, and bolster the success future generations of Civil & Mineral students. All Donations are matched dollar-for-dollar as we work toward a goal of $1.5 million (we’ve reached 70 per cent to date!). Donors are gratefully acknowledged on the campaign website. Those who contribute $1,000 or more will be recognized on a permanent donor wall. In addition, bunkbeds can be named for $5,000, built-in benches for $10,000 or even rooms for $25,000 and above.

Special thanks to everyone who has contributed to the campaign for CAMP to date*: