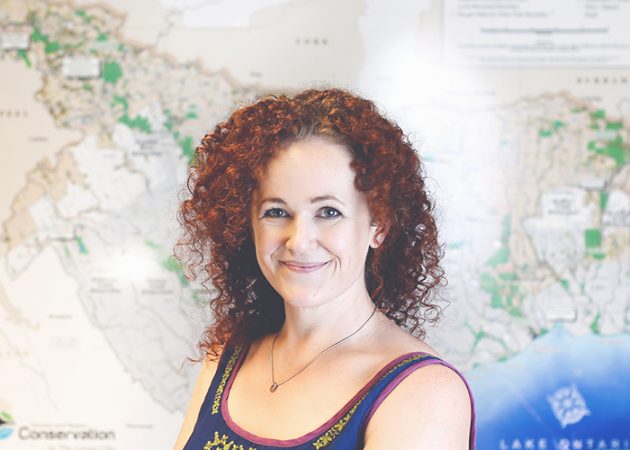 Jenny Hill (CivE PhD 1T6) advises everyone from landscape architects, to professional civil engineers, to condominium developers, on how to put more water back into the ground and the air. (Photo credit: Yuestas David )

Before Jenny Hill took on her current job — working to prevent catastrophic city-wide flooding in the Greater Toronto Area — she worked in a police forensics lab. She thinks her role now is more exciting.

“Forensics is not what people think,” she says. “None of us carry guns, we don’t do a dozen different tests to solve a crime. We have to do very routine tasks, which quickly becomes repetitive.”

In her spare time, Hill pursued a master’s degree in landscape architecture, and eventually moved to Toronto to work in the field. But she quickly discovered that her U.K. training wasn’t completely transferable, and began considering the related field of environmental engineering.

“I decided to reach out to a few professors at U of T, just to get a feel for what was going on,” she says. Soon, she found herself in the lab of Professor Jennifer Drake (CivMin), a leading expert in stormwater systems and management.

Urban stormwater is a critical issue for many large cities, including Toronto, which experienced catastrophic flash floods in both 2013 and 2018. Part of the challenge is that asphalt, concrete and rooftops are normally impervious to water. Heavily paved urban landscapes prevent rainwater from draining into the underlying soil — instead, the built environment channels it into low-lying areas, which quickly become overwhelmed.

Hill focused her research on designing infrastructure that could help absorb excess rain and release it at a more gradual pace. In particular, she looked at the performance of various types of green roofs using the Green Roof Innovation Testing Laboratory (GRIT Lab) at the John H. Daniels Faculty of Architecture, Landscape, and Design.

Green roofs are often touted as a potential solution to urban flooding: a 2009 Toronto bylaw mandated the construction of green roofs on all new buildings. But according to Hill, the law omitted any performance-based specifications, limiting its effectiveness.

“It simply says that you have to have one,” she explains. “You know the turf grass you can roll out onto a lawn? You can purchase a similar product, roll it onto the roof membrane and call it a day, but that alone doesn’t have much absorbent capacity.”

Today, Hill works as a research scientist at the Toronto Region Conservation Authority (TRCA), which is mandated to ensure the conservation, restoration and responsible management of the region’s water, land and natural habitats. In this role, she advises everyone from landscape architects, to professional civil engineers, to condominium developers, on how to put more water back into the ground and the air.

Green roofs are only a small part of the strategy. Hill and TRCA promote feasible, sustainable solutions such as implementing underground stormwater crates and the planting of more tree pits.

They also advocate for floodable landscapes: areas such as the public parks that line ravines throughout the city of Toronto that are specifically designed to flood during heavy rain events. The idea is to contain waters in these recreational areas rather than allowing them to destroy homes and businesses. But Hill acknowledges that it can be a hard sell.

“The public are afraid of flooding, and rightly so,” she says. “They think you’re bringing the flooding to them, but that’s not the case. We can’t easily stop having excess stormwater in the city. We have to decide where to flood; do you want it in your park or in your basement?”

Hill is currently focusing her research on the practice and development of floodable landscapes  around the world — she cites the Netherlands as a useful model — with the aim of implementing more of them throughout Toronto.

Looming over all her work is the threat of climate change, which will likely increase the frequency and intensity of flooding events. Hill says that while floodable landscapes, green roofs, and other low-impact developments will make a positive difference in managing floods, they may not be enough on their own.

“I think that climate change is serious enough that we’re going to need all of these green infrastructure measures, and the pipes.” she says. “It’s not an ‘either or’ situation. We will need all of the engineering.”