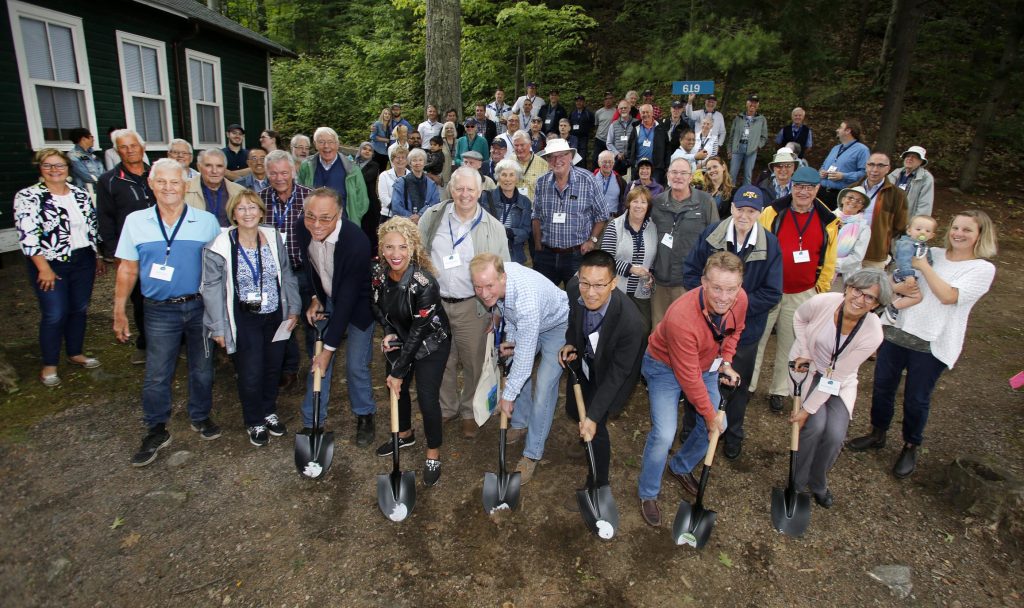 On Saturday, September 7 attendees celebrated a century of Survey Camp at Dorset and Gull Lake. With a fantastic turnout of Alumni, current students, Faculty and interested family members, the event showcased existing facilities at Gull Lake and marked a ceremonial groundbreaking for a planned new HCAT bunkhouse and MacGillivray Common Room.

The event marked the 100th class since the first group of University of Toronto Engineering students used the site, located on the north shore of Gull Lake near Minden, Ont. Purchased in 1919, the first cohort of U of T students took classes on the site in 1920, with the current 2019 class becoming the 100th consecutive year to attend Survey Camp – now known as Civil And Mineral Practicals (CAMP). The centennial celebrations included recognition of the many alumni and supporters who have contributed to the Centennial Campaign for Camp, helping the camp to reach 70% of a $1.5 million goal. Donors are also gratefully acknowledged on the campaign website and through bunkbed, bench and room dedications.

Leave your own mark on Camp:
The ongoing Centennial Campaign for Camp offers alumni an opportunity to once again ‘leave their mark’ on camp, and bolster the success future generations of Civil & Mineral students. All Donations are matched dollar-for-dollar as we work toward a goal of $1.5 million (we’ve reached 70 per cent to date!). Donors are gratefully acknowledged on the campaign website. Those who contribute $1,000 or more will be recognized on a permanent donor wall. In addition, bunkbeds can be named for $5,000, built-in benches for $10,000 or even rooms for $25,000 and above. 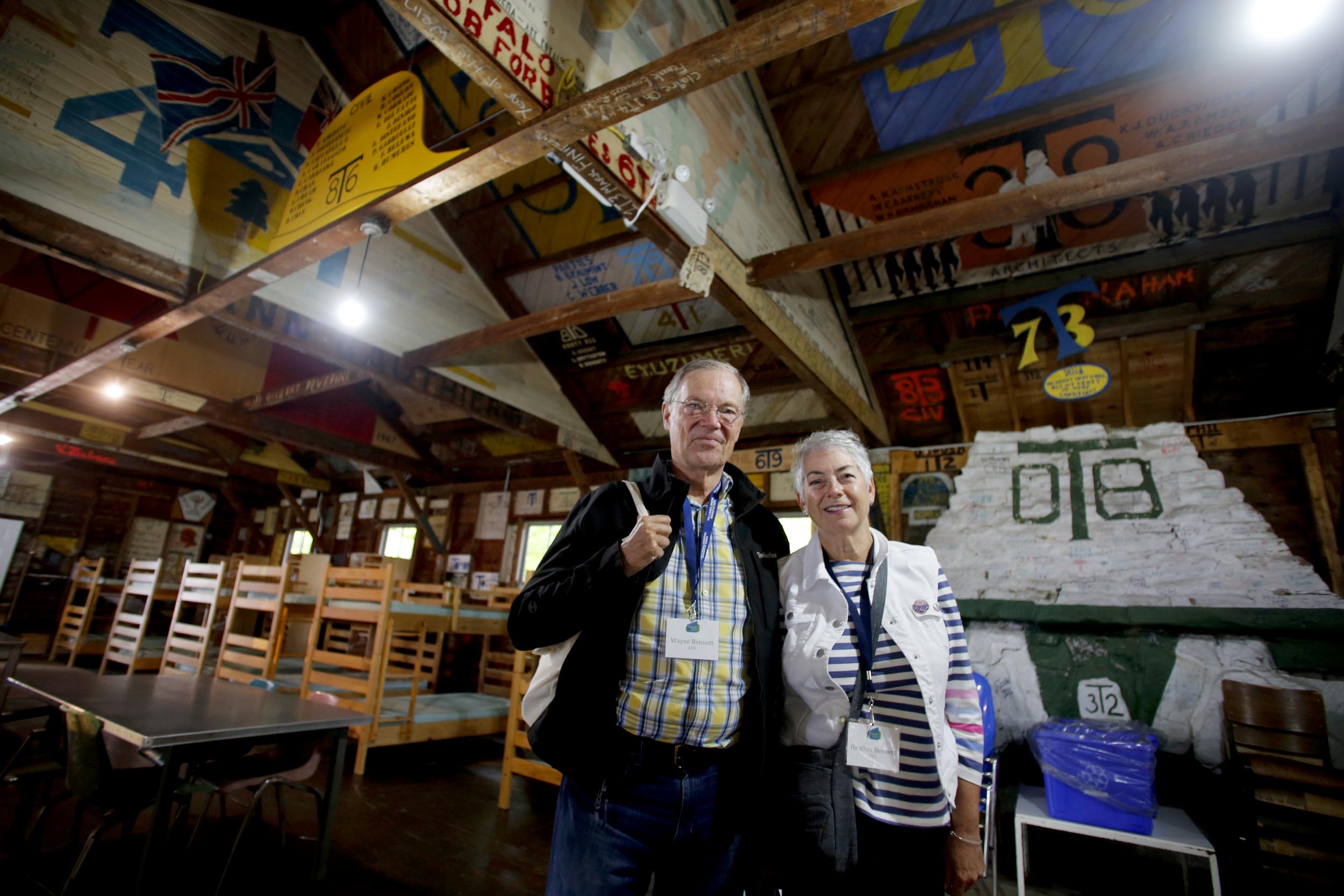 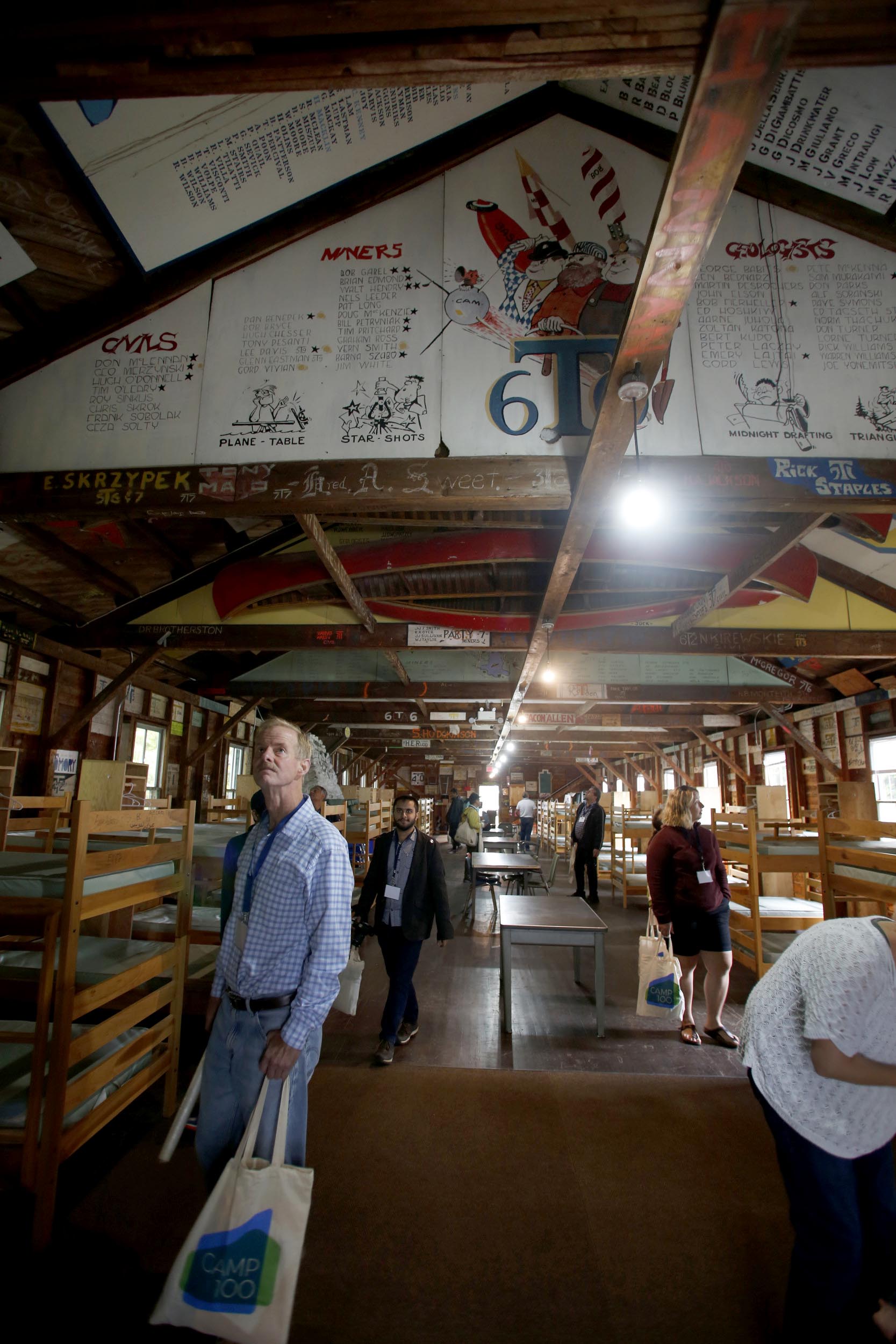 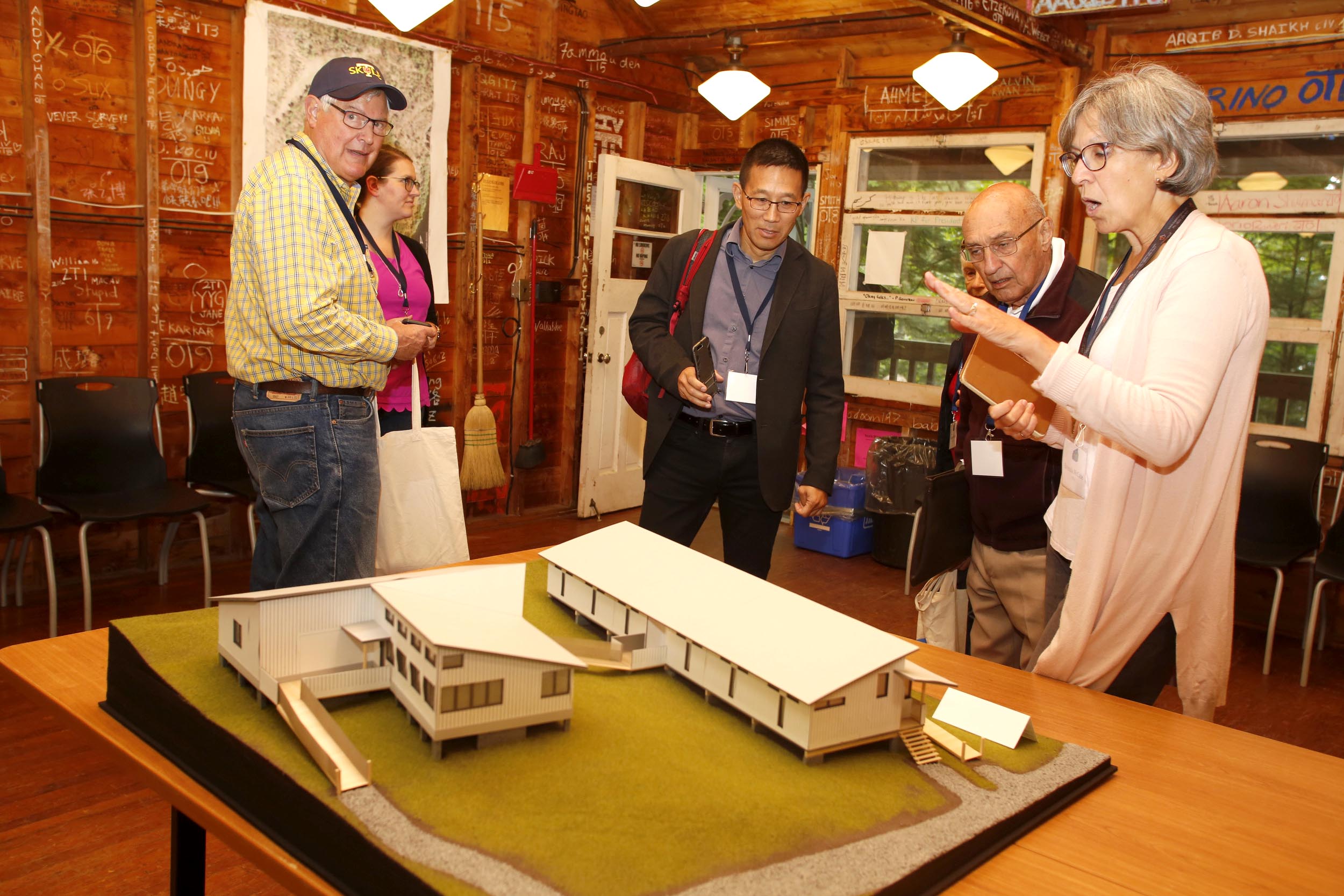 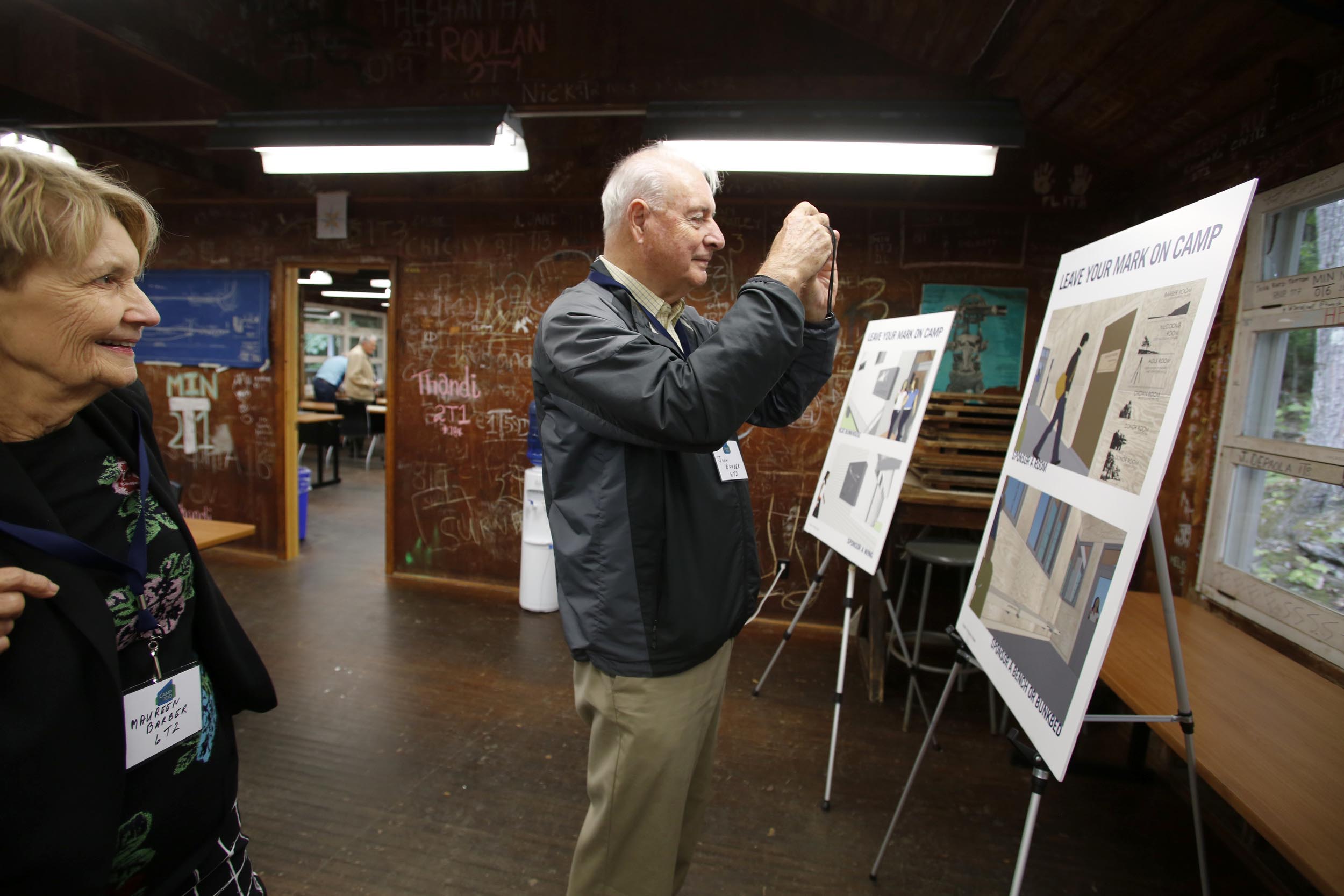 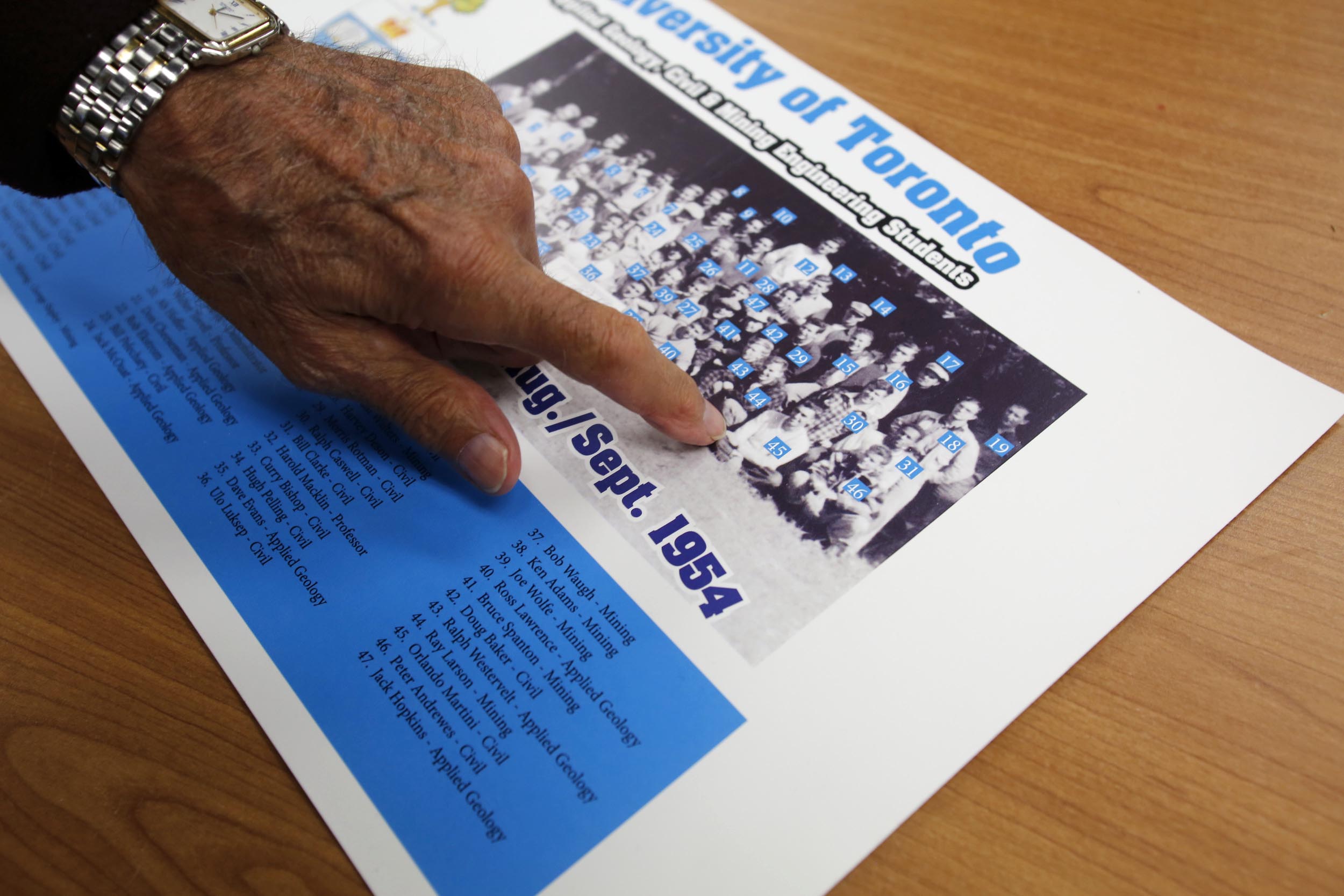 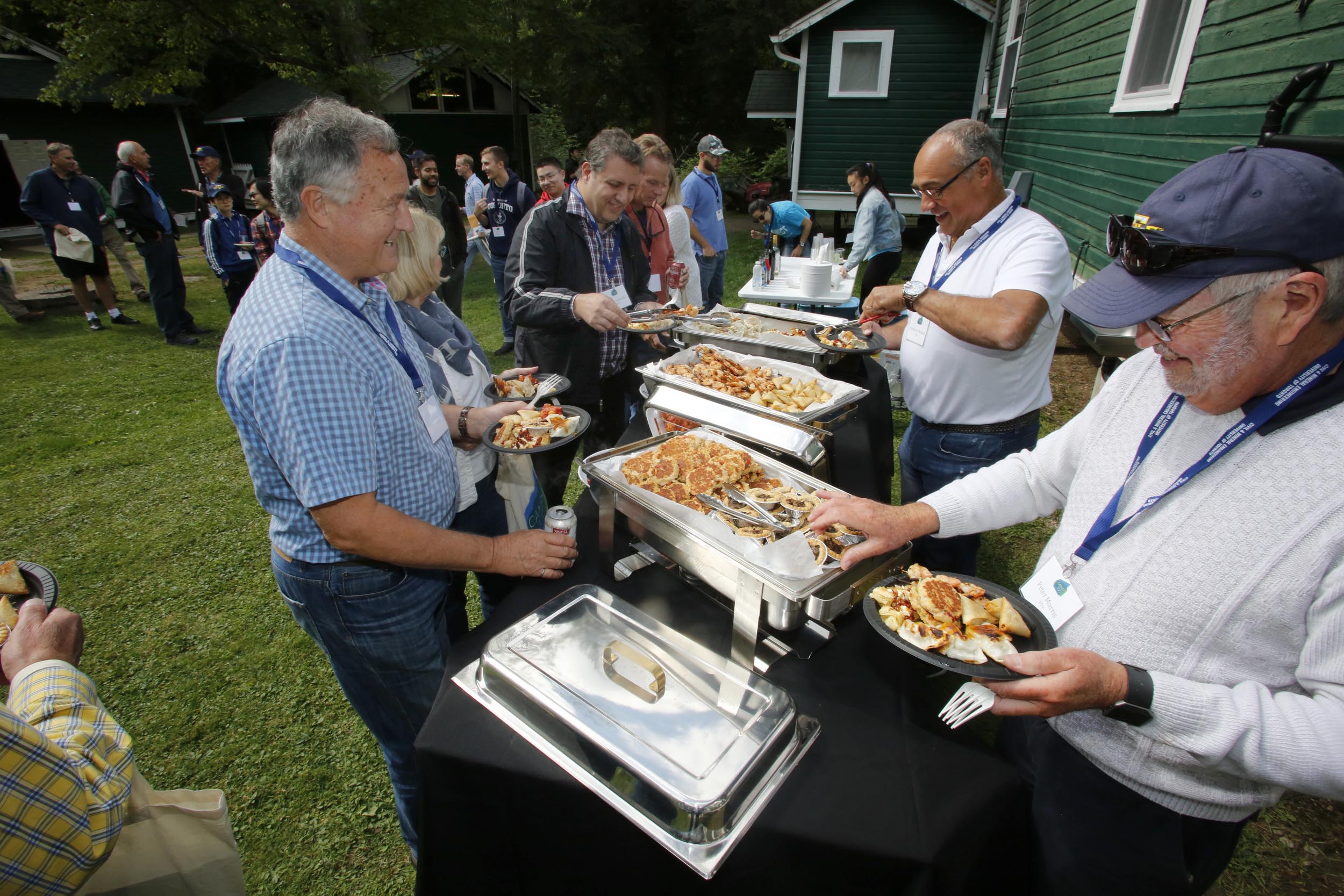 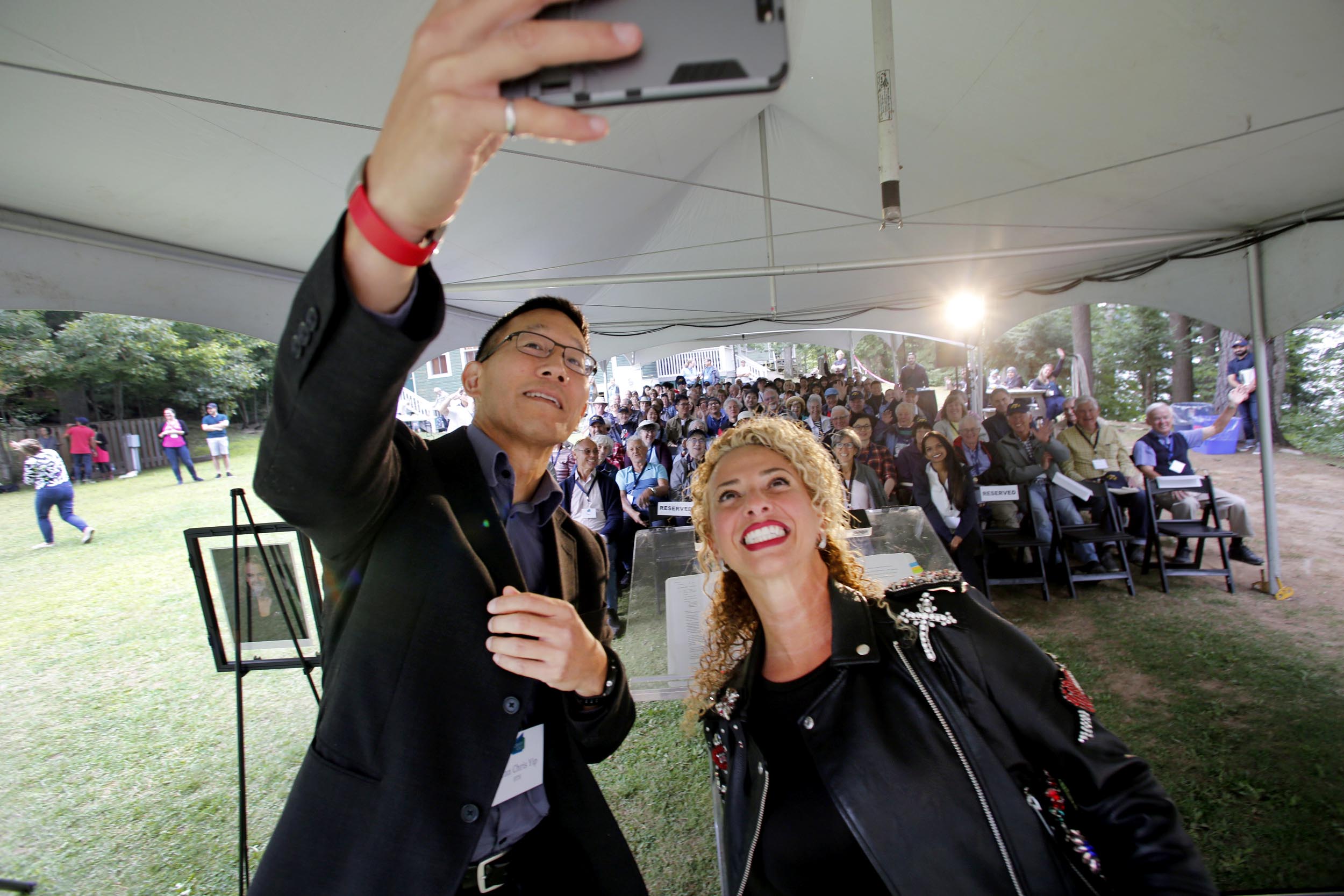 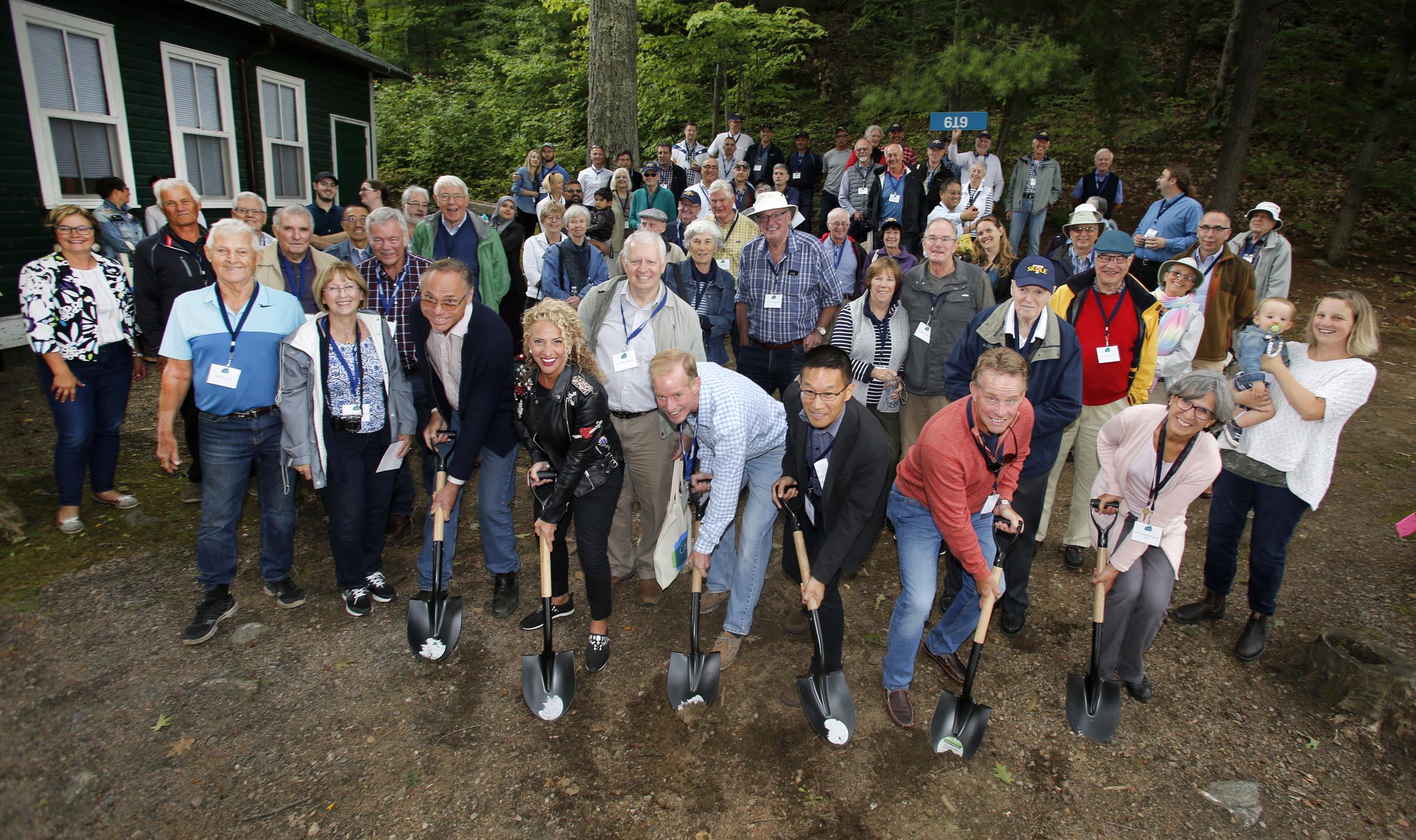 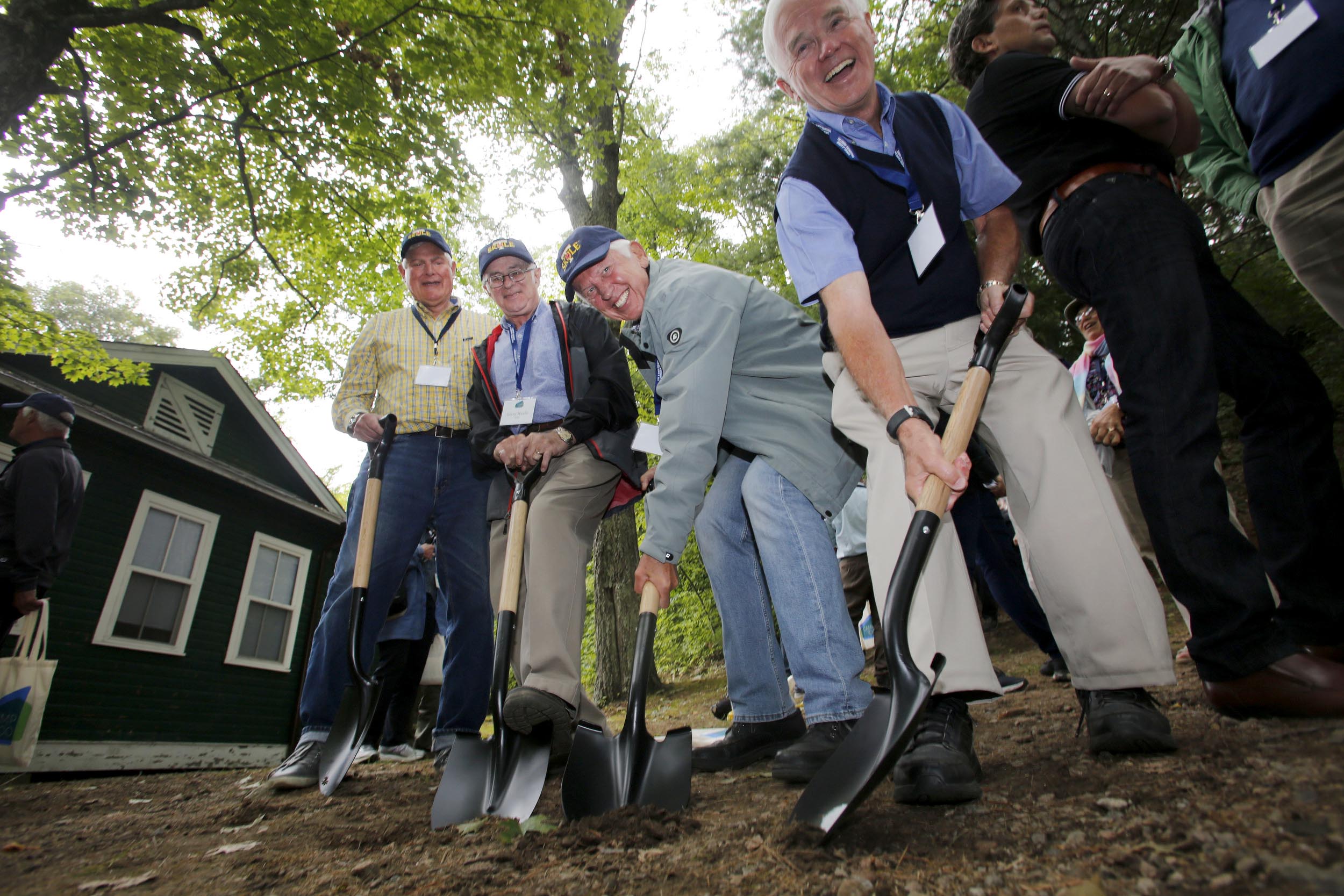 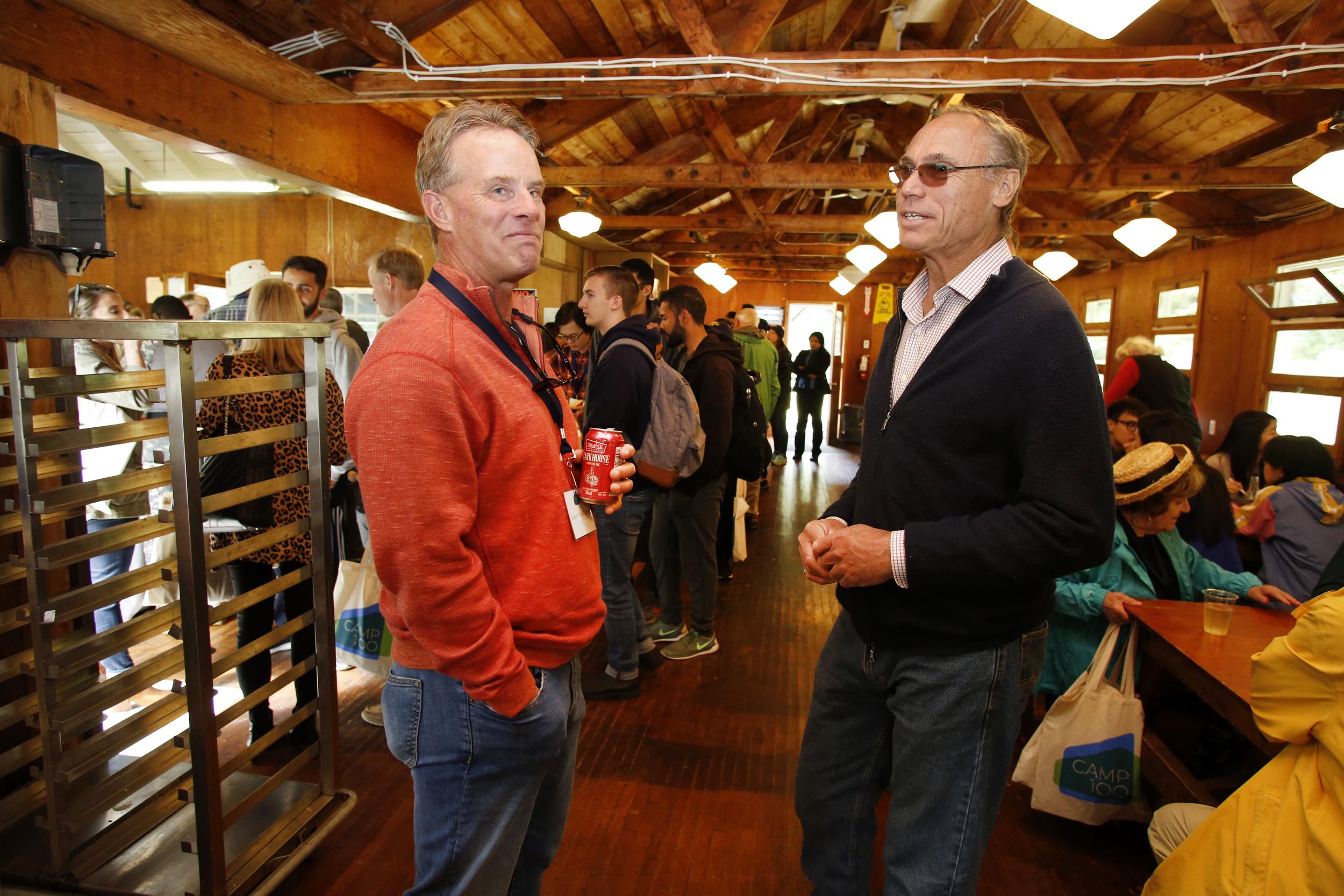 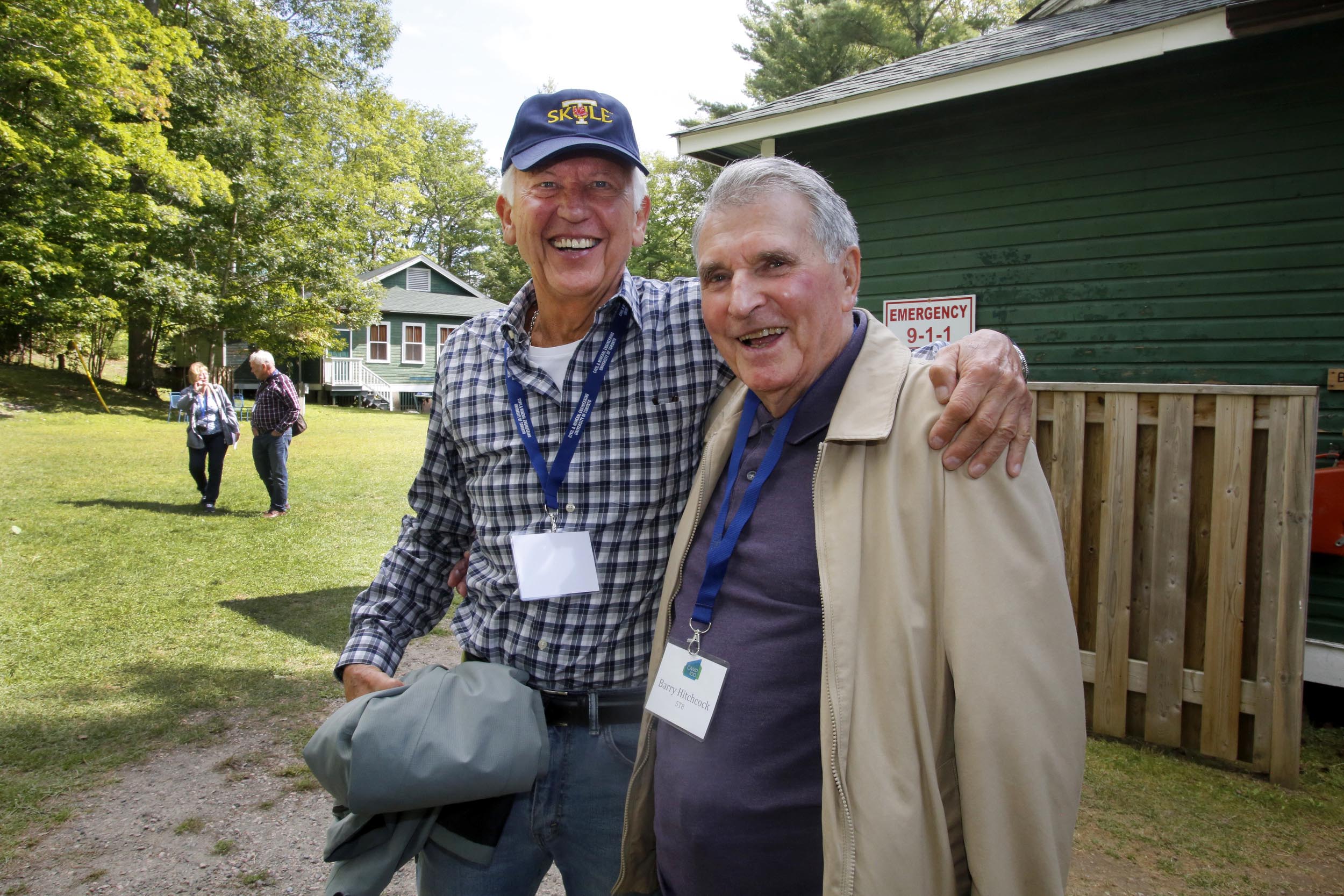 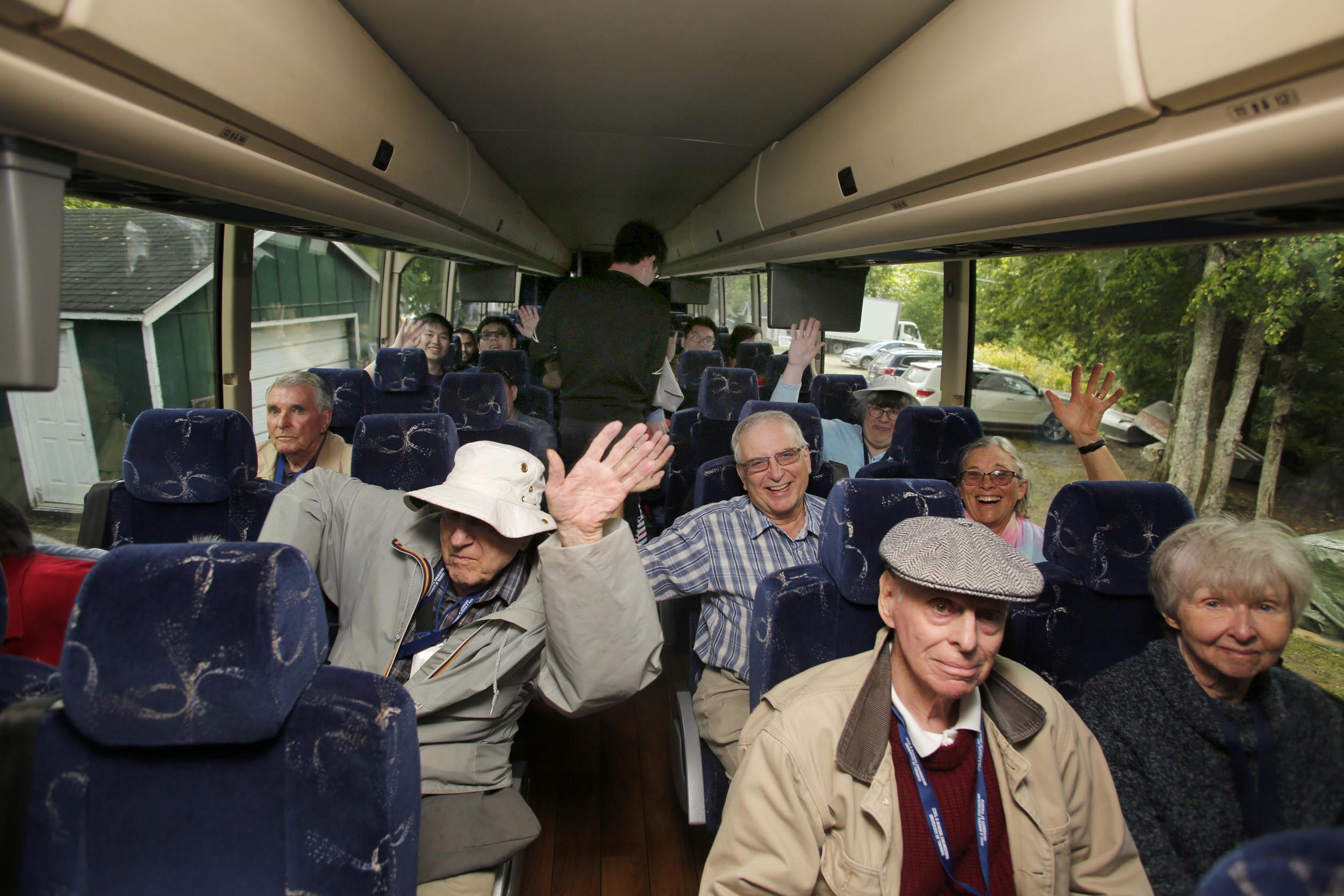 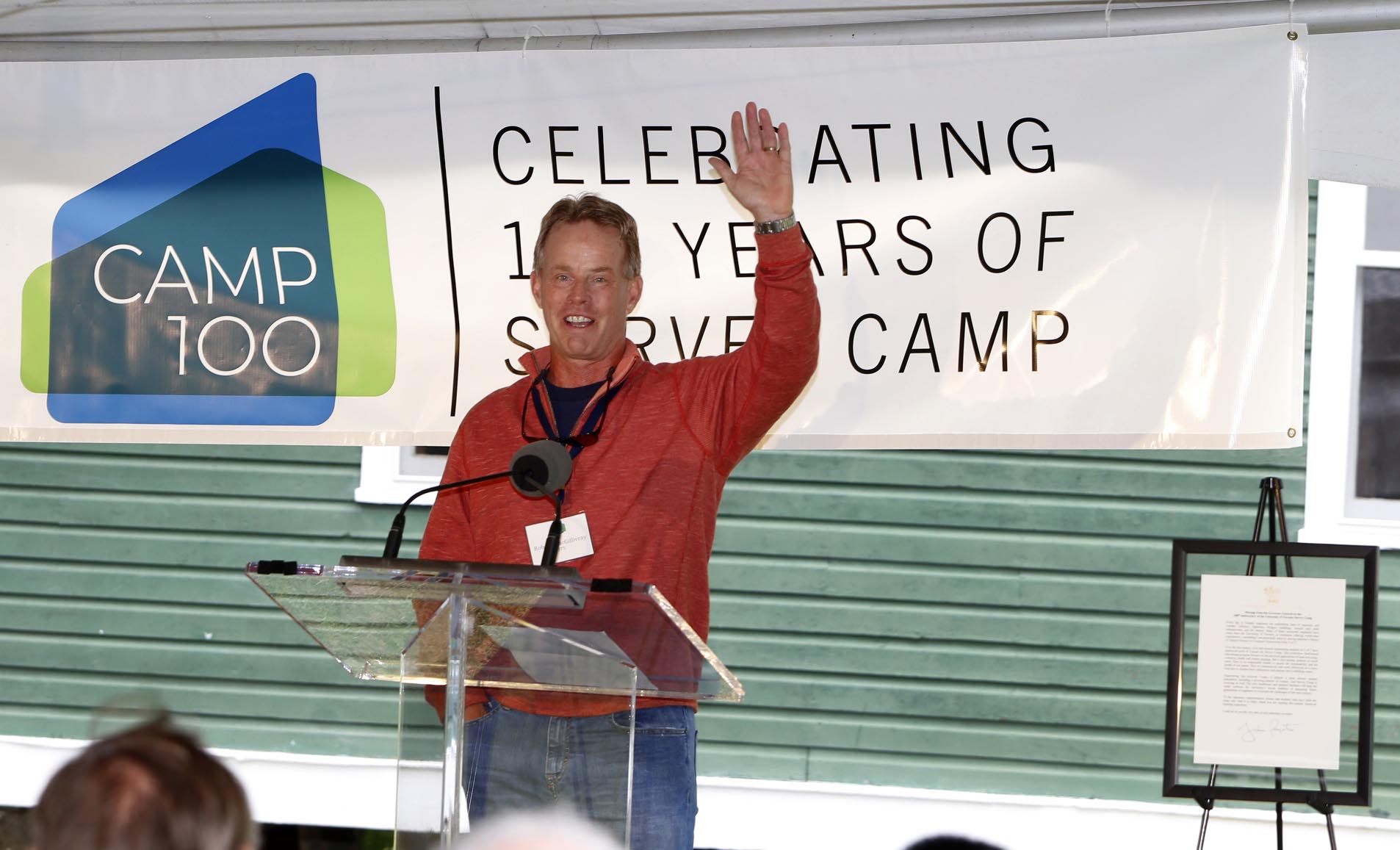 IMAGES BELOW - Hover for captions

A ceremonial groundbreaking for the upcoming new construction of the HCAT Bunkhouse and MacGillivray Common Room.

Robert MacGillivray (Civ 8T5), along with brother Scott donated to the MacGillivray Common Room, waves during his remarks to attendees at CAMP100 event.

CAMP100 attendees enjoy snacks and refreshments at the centennial celebration.

Orlando Martini (Civ 5T6) finds himself in a 1954 photo from Survey Camp.

John Barber (Civ 6T2) takes a photo of the label for the named “Barber Room” in honour of his donation to the new HCAT bunkhouse at Survey Camp.

A group of Civ 6T9 grads in the bunkhouse (L to R): Kenneth Brown, Ron Bell and Wayne Bennett

Wayne Bennett (Civ 6T9) and Heather Bennett (BA 71), who met at Gull Lake in 1967 while Heather was working as a waitress at a local lodge, pose for a photo in the bunkhouse

Attendees wave goodbye from the coach bus at the end of CAMP100 events, before departing back to Toronto.